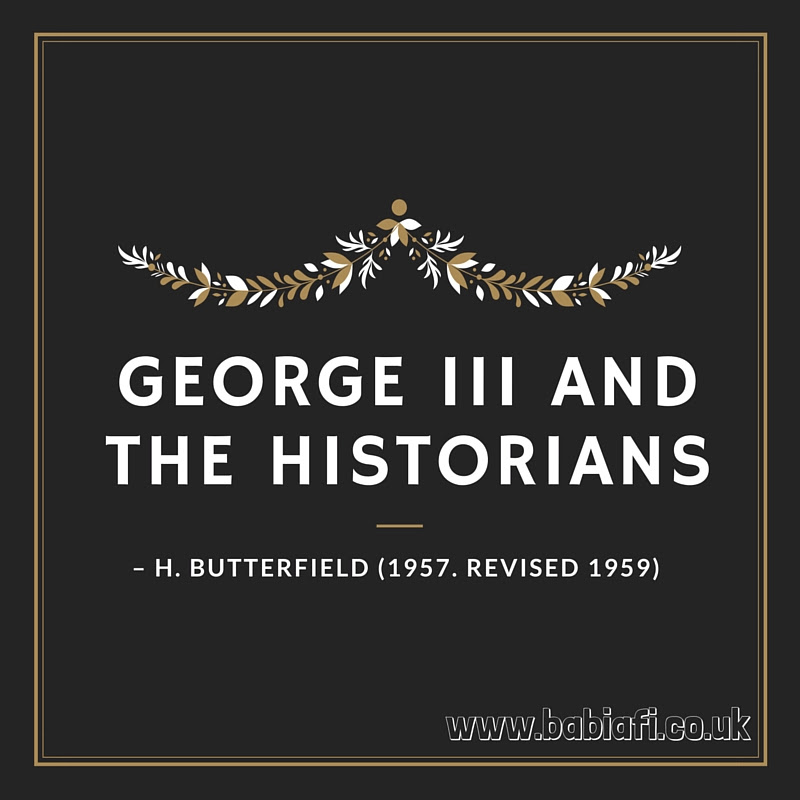 Herbert Butterfield was born in Yorkshire in 1900; and studied at Cambridge, in later life becoming master of Peterhouse college and vice-chancellor of the university. His most famous work is “The Whig Interpretation of History” (1931) in which he lay down and defined the characteristics of “Whig history.”

What is the book about?

Butterfield tells us he sets out to explain how historiography (Whig and the Namier school in particular) have resulted in the history of the reign of George III coming into “a state of considerable confusion.” The book is then split into three sections…

Book One: The Historian and his Evidence.

Butterfield explains a good knowledge and understanding of the period is essential to interpreting primary sources. Also warns the historian to beware of first hand narratives – they were being written for a reason after all. Complains that some historians (ie. The Namier school) focus too much on primary sources to the exclusion of secondary sources: making it difficult for them to reach correct conclusions.

Here Butterfield explains the historiography of the period up to the rise of the Namier school, claiming it is essential to gaining a good understanding of the reign. Early historiography was based on contemporary sources such as the letters of Bubb Dodington, the work of Burke and opposition pamphlets. Serious historiography of the period began with Adolphus’ “History of England 1760-1783” in 1802, offering up a favourable, Tory, view of the King. After George III’s death in 1820 the historiography became more open in its criticisms: Holt, Huish and Walpole, whilst generally supportive of the king, were unchecked in their criticisms of the King’s “favourite”, Bute. New evidence emerged in the 1830s/40s. eg. The Chatham and Bedford Correspondences. This heralded a new Whig historiography and a picture of George III as the enemy of Whig constitutional ideals. Trevelyan and Lecky held extreme Whig views on the reign; Lecky claimed in 1882 that George III had “inflicted more profound and enduring injuries upon his country than any other modern English King” (because he wanted to regain direct royal control of the country). In the early 1900s historians like Von Ruville broke away from the Whig history to offer a more balanced and realistic interpretation of the reign.

From the 1890s there was a move towards focusing on individuals as understanding their motives for entering parliament helped explain their actions as politicians. This made primary sources like letters, journals and diaries v. important. This was the focus of Namier’s 1929 book, “Structure of Politics.” Butterfield congratulates the contribution of Namier and his supporters to research – the dating of hundreds of letters from George III to Bute by R. Sedgwick for example.

Butterfield’s criticisms of the Namier school:

Butterfield’s criticisms have, in turn invited criticism. The goal of Namier’s research was essentially, they argue, the “rigorous substitution of accurate detail for the generalizations which had contented older historians.”