I've been really lucky that since having Marianna - in direct contrast to what I expected - my mental health has been a lot better. I've noticed it mainly through the little things, like not having the rush of panic every time I need to make a phone call to somebody I don't know well, and happily leaving online comments again even when my view is not that of the majority. When I was feeling fragile the mere idea of that would make me want to be sick. Defending my own opinions seemed as impossible a task as climbing Everest. 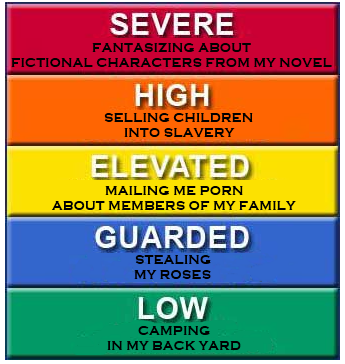 Every time you hit 'post' with a typo still at large, you think you're about to get ridiculed as much as a Diana Gabaldon quote on fandom_wank. (Weren't on the fandom scene? Read more HERE.)

But now I'm back blogging, debating, and commenting - though not on YouTube. It takes true bravery to dip a toe into the pit of ignorance and illiteracy that is a heated YouTube comments section.

I think it's that when you're in a good place mentally you're better able to put things into perspective. If somebody online thinks I'm wrong and calls me an idiot, well, all I have to do is prove that I'm right (99.99% of the time ;) and call them an idiot in return, should the fancy take me. If I can't be bothered, or if the idiot calling is likely to go on ad infinitum I can just log off and get on with my life. I don't need to spend time agonising over what a stranger thinks of me based on a two minute exchange on some internet forum. In the scheme of things, it just doesn't matter.

As Cracked (self billed as 'America's only humor site') notes -


It is said that opinions are like assholes: everybody has one.

June 20, 2019
Here are 100 places you can get free artificial grass samples in the UK. I've put the number of samples you can get from each supplier in brackets; '1+' means you get a pre-chosen pack of samples.
8 comments
Read more