May 06, 2015
I read yesterday that UKIP's candidate for North East Hampshire, Robert Blay, has had to be suspended for threatening to shoot his Conservative opponent, Ranil Jayawardena, presumably for the grievous crime of not being white. It's just the latest in a long line of stories which make me ashamed to be British.

Some of the scaremongering that goes on by UKIP and other right wing sources is truly outrageous. We're overrun by immigrants, apparently - although our net immigration (i.e. the number of people coming in versus the number of people leaving) is actually much lower than most countries in western Europe (see HERE). Muslims are taking over, supposedly - it's the second most common religion in the UK, true, but it still only accounts for 4.4% of the population. In contrast, 20% of the country consider themselves Christian.

The only UKIP leaflet worth reading...

Most of the major justifications for starting a sentence with 'I'm not racist, but' can easily be refuted with statistics. So called 'health tourism' represents 0.7% of the NHS budget - a figure which also includes British expats who return home for treatment. EU membership does cost us money, though after rebates it's £33 million a day as opposed to £55 million. But our net contribution, representing about 0.4% of GDP, is actually less per head than many other western European countries, and rakes in a net benefit of some 4% of GDP.

The 13% of the UK population who are immigrants are not 'sponging' off the state. Less than 3% of EU immigrants are unemployed - and those who are in work are often in skilled work; 1/4 of NHS doctors are immigrants. The problem is often a lack of understanding of the difference between types of immigration (e.g. economic migrants vs. asylum seekers). I lead a youth group in Newport for a while and these media views were so prevalent, so insidious, that young people who had recently come to Britain as refugees parroted these things back to me - in spite of actually living the reality. (They weren't personally, but it had to be true, didn't it?) 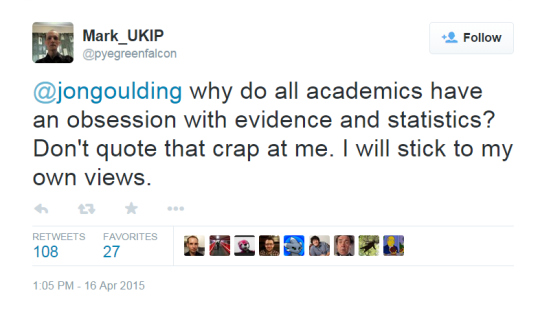 The collective laughter of the internet resulted in the decision to delete...

The problem is that facts have little to no impact on those who spread the falsehoods. I once got into an argument on facebook with a guy who claimed that he had no need to speak to Muslim women living in Torfaen for the reality of their experiences - he had seen a video on YouTube of a woman being stoned to death in Iran, and that had told him all he needed to know. Because Iran and the Welsh 'Eastern Valley' are renowned for being indistinguishable...

But that isn't what makes me ashamed - though it has an impact on it, certainly. What really pains me is that it's the British education system which has allowed UKIP and its ilk to gain a foothold. People will always blame the 'other' in times of economic hardship, you only have to pick up a history book. But we have created an environment so devoid of critical thinking skills that, in a world where we can answer practically any question at the push of a smart phone button, people still prefer to rely on the wit and wisdom of 'a bloke down the pub'.

This is the real outcome of years of only teaching children to regurgitate information for an exam.

It's not a pretty sight, is it?