May 20, 2015
When I finished my undergrad degree I was faced with the age old question: what next? I had nothing lined up and the world was my oyster, so long as whatever it offered was exceptionally cheap. One option I considered was going on to do a masters in gender or LGBT studies - it being a particular interest of mine - but I eventually concluded it was a) beyond my means (I'd have to cough up for tuition, accommodation, and living expenses as South Wales lacked a course) and b) unlikely to help me get a full time job. Anyway, the point of this story is that Goldsmiths was one of the universities I looked into.

Goldsmiths Student Union is in the midst of a scandal at the moment after their diversity officer, Bahar Mustafa, used the official SU account to tweet #killallwhitemen and label other students 'white trash'. She says it was an in-joke and I'm sure it was, though it obviously speaks of problems within the SU of cliquey, unprofessional behaviour. Similarly the closed meeting for BME women and non-binary people has been blown out of proportion - safe spaces are important, particularly with initial organising meetings as I believe the one in question was. 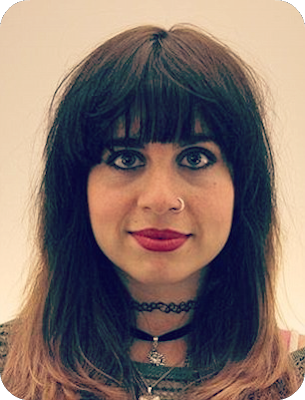 Bahar Mustafa - petitions for and against her sacking are gaining signatures this week.

My real concern is the claim she made in her defending statement: "There have been charges laid against me that I am racist and sexist towards white men. I, an ethnic minority woman, cannot be racist or sexist towards white men, because racism and sexism describe structures of privilege based on race and gender. Therefore, women of colour and minority genders cannot be racist or sexist, since we do not stand to benefit from such a system."

Mustafa graduated from Goldsmiths with a MA in Gender, Media & Culture. The above really makes me question their standard of teaching. The idea that racism and sexism rely solely on the perpetrator being in a relative position of power is popular on the net, especially on Tumblr where such beliefs are seen as a prerequisite for SJW (Social Justice Warrior) status. Looking at racism specifically, this is an Americo-centric view which relies on the principle that BME individuals (or in US phraseology, POC: Persons of Color) are always a minority of the population, and white individuals always the majority. (Because presumably there is nothing but an unpopulated wasteland beyond the borders of the United States of America.) 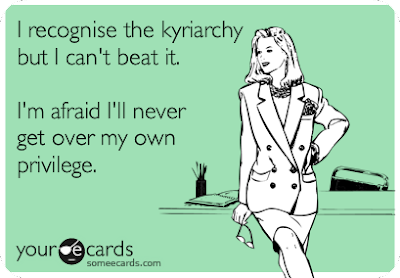 The core problem of Tumblr style activism - the recognition that there are numerous factors which oppress (see intersectionality), but an obsession with the idea of 'checking your privilege' frequently leads to only more in-fighting and exclusionism.

Of course, the reality is rather different. It's perfectly possible for a white individual to experience racism in India, Japan, or Trinidad. Oh, and the UK, and the USA, and even Sweden. As a white British woman, let me assure you, I can be racist to a white Polish man - it doesn't matter that thanks to his gender he historically has more power than me (though it must get UKIP women like Diane James off the hook). Similarly, a black woman in the UK can be racist to a Roma woman, who in turn can be racist to a Chinese woman. It doesn't matter that all three are members of oppressed minorities in their country of residence. Even if you're not willing to relinquish the idea that racism requires power, you have to at least concede that the power balance shifts between every interaction making it difficult to make claims like 'all BME women can never be racist'.

The issue is that you can't just superimpose US experience on other places. In the US race is seen as the key determining factor when it comes to levels of attained education, income, and so on. In the UK it's class. The truth is that in both countries the experiences of being 'white' or 'black', or 'male' or 'female', or 'rich' or 'poor' are not homogeneous. A middle class white woman will have different experiences to a white woman living below the poverty line, though they have the commonality of being white and women. A black Muslim will face different challenges to a black Jew, though they share skin colour and perhaps any number of other descriptors, from 'short' to 'model train enthusiast'. 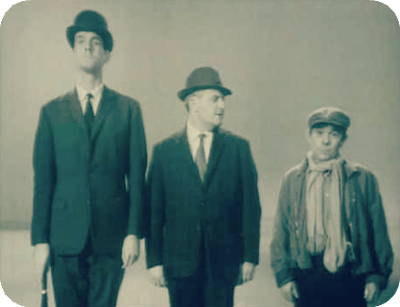 In the classic Monty Python sketch all three are white British men of a similar age - but socio-economic status makes all the difference.

It also completely ignores the legislative realities of the UK. As gov.uk sets out: "It is against the law to discriminate against anyone because of: age, being or becoming a transsexual person, being married or in a civil partnership, being pregnant or having a child, disability, race including colour, nationality, ethnic or national origin, religion, belief or lack of religion/belief, sex, or sexual orientation. These are called ‘protected characteristics’." This means that under UK law you can be - and people have been - convicted of racist behaviour for calling a Welsh person 'a sheep shagger' because it implies prejudice against their national origin. That example really illustrates the wide scope of the UK legal definition of 'racism'.

American media might be ubiquitous, but that doesn't mean to say all American beliefs, laws, and values apply the world over. Bahar Mustafa is guilty of nothing more than being naive and unprofessional - Goldsmiths itself is the one that ought to take a long hard look at what they're offering students for the hefty sums they're charging.