You can watch the webcast of today's full council meeting HERE. The longest item on the agenda, the update on the corporate plan, was actually deferred so the meeting was fairly short.

There was one petition and one public question, both from Terry Banfield who is well known locally as a community activist and anarchist. The petition was about the reduction in available respite and the question was about the reason - cuts, and how Torfaen Labour is embracing neoliberal capitalism by cutting public services. I get the reasoning behind the far Left argument that we should make a stand, refuse to set a budget and in doing so set a precedent... but, let's face it, we all saw how well that worked for Liverpool City Council. If a council refuses to set a legal budget (or, live within its reduced means using the household budget analogy) the government will just appoint commissioners to do it. 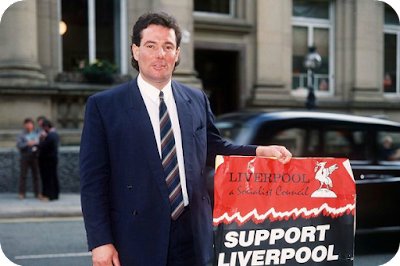 The deputy leader, Cllr Anthony Hunt, argued that safeguarding jobs and services as much as possible was more important than having 15 minutes of fame. Derek Hatton - pictured - even had his own Spitting Image puppet back when he was the infamous deputy leader of Liverpool City Council in the mid 1980s.

Next came the agreement to allowing prudential borrowing to go ahead to fund the ground works needed for the expansion of the Shepherd's Hill Gypsy and Traveller site. It's badly needed - subsidence and overcrowding have combined to create conditions that would inspire endless petitions if it were a regular residential street (especially as pitch rent and management fees are £520 a month, a good £60 higher than the Pontypool average).  Then there was the annual scrutiny review, with short recaps of the year's work from the scrutiny chairs - Norma Parrish for Cleaner Communities, Ray Mills for Healthier Communities, Colette Thomas for Learning Communities, Stuart Ashley for Resources and Corporate Business, and Mike Harris for Safer Communities. The main focus was on the increased training and work around ensuring the right questions are being asked. 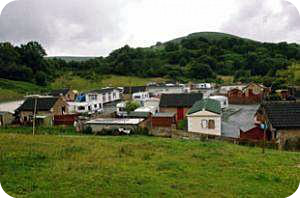 The Shepherd's Hill site was established in 1975 and currently consists of 26 permanent residential pitches and one transit pitch.

Finally there were two members' questions from Jeff Rees: one about the proposed city region deal for south east Wales (a feasibility study is soon to commence, Torfaen is contributing £30k for it), and the other about funding for the new smaller bins to be rolled out later this year. They're going to be about £200k cheaper than originally estimated, but Cllr Rees rightly pointed out that one of the main justifications was the threat of a £100k fine per the % the waste target is missed by... but Welsh government decided to waive the fines for other councils this year. Still, even without the environmental argument, it's no good relying on Welsh government to treat all councils the same.