June 15, 2015
Jack London was an American author / journalist who, had he lived today, would probably be making terrible documentaries for Channel 4 due to lack of funding and the collapse of print media. Thankfully, London was born in 1876 and channelled his social activism into investigating the lives of American hobos and the people of the Abyss, compiling some of the most fascinating first hand accounts of just why the world was in need of socialism. 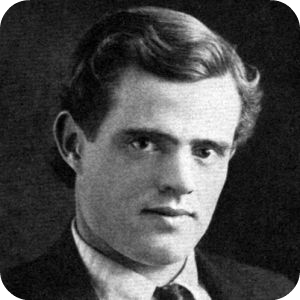 I read The People of the Abyss (1903) all the way through for the first time last night and it was so bleak and depressing. It describes London's East End at a time when over 50% of children born in the 'Abyss' was dead before the age five and people regularly died of starvation and exposure in the streets. Grinding, devastating poverty was everywhere, and the only way out was the workhouse or suicide. Having spent time in the workhouse, disguised as a yankee sailor without ship, London opined that suicide was by far the better option. 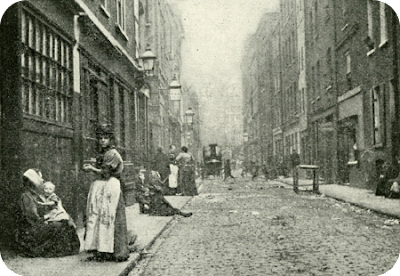 Dorset Street, otherwise known as the worst street in London.

Every page makes you thankful that you're living today, with the safety net of the welfare state - imperfect though it may be. The truly horrid thing is how much of it is still relevant, all the same. On the evils of drink London says: 'Then there are the insecurity of happiness, the precariousness of existence, the well founded fear of the future - potent factors in driving people to drink. ... It is of no avail to preach temperance and teetotalism to these people. The drink habit may be the cause of many miseries; but is is, in turn, the effect of other and prior miseries.' 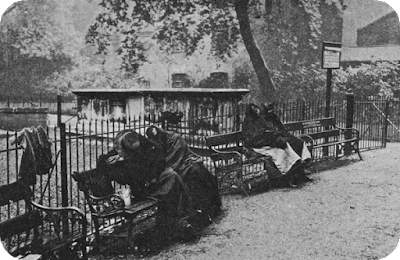 The homeless sleep on benches in Itchy Park (Christ Church, Spitalfields) - at night the police were under orders to move them on, so sleeping was done by day.

London writes too of the ever prevalent idea that the poor are poor because they are too idle to work. Then, as now, there was no full employment economy - the need for work drove down wages, conditions, and left the less capable with next to no chance of finding employment. The most recognisable issue, for me at least, was 'the thing'. London says: 'It is all a matter of chance. Everything depends upon the thing happening, the thing with which they have nothing to do.' The thing is the firm going bust, or a road accident, or bad news from the doctor. 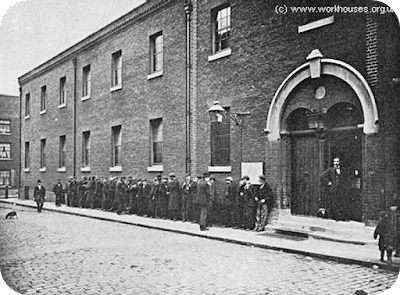 Men queue up in hope of getting a bed for the night in the casual ward of the workhouse. For the privilege they would be expected to do a day's hard labour and check in their self-respect at the door.

After the thing happens you go from being 'an alarm clock hero', 'the salt of the nation', to a burden on the state. You now deserve to be humiliated, interrogated and dehumanised; if you're not working you must be shirking. The safety net is there, of course, but there's no urgency about it - you're likely to be waiting upwards of six months for a decision on housing benefit eligibility, and jumping through all the required hoops for more complex benefits can be a job in itself. Because once the thing happens you matter less. You're worth less.

All that stands between the you and 'scrounging' off your erstwhile colleagues is the thing. Even today, that thought is far from comforting!