Growing up as an English speaker is, in many ways, pretty cushy. Not only is it the mother tongue of the Anglosphere, it's also one of the official languages of dozens of other countries. It's taught in schools the world over, and you can feel fairly secure in the knowledge that wherever you go another English speaker won't be too far away.

This plays its part, I'm sure, in the findings of a report released today looking into the declining take up of modern foreign languages in Welsh secondary schools. Although the language teachers interviewed for the BBC news bulletin said that the main issue is that Modern Foreign Languages don't count against the Core Subject Indicator (i.e. success or otherwise in core subjects: English, Welsh, Maths and Science), which is one of the key pieces of data used to rank schools. They argue that if MFL were included in the CSI the uptake would rise dramatically.

I can't say that I'm entirely convinced. The schools will show more interest in MFL teaching, there is no doubt about that, but unless the subject is made compulsory I don't know if this would be enough to tackle the widespread apathy towards MFL learning. 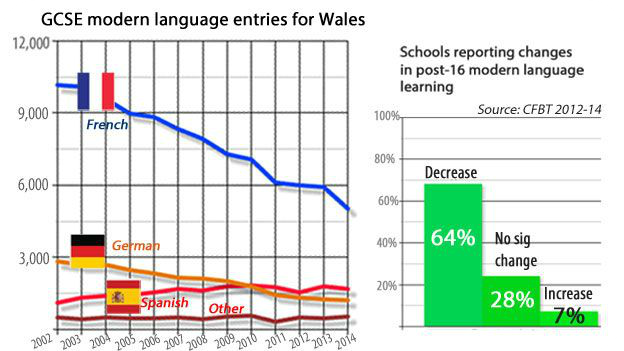 You have the extra difficulty in Wales of compulsory Welsh, especially in English medium schools in non-Welsh speaking areas. I was in the first year group to take the compulsory Welsh language GCSE and, though I'm in favour of Welsh teaching in schools, I don't think it's any surprise at all that 2002 saw the beginning of a steep decline in MFL take-up. Essentially, you're already learning a 'foreign' language - many people feel no inclination to start learning another.


What can be done? Well, the plans in place are all very practical. The usual top performing schools in the subjects to become regional centres of excellence, and working with universities and other institutions to share resources. More promotion of the UK based jobs which need language skills, and introducing MFLs at an earlier age, at primary level. 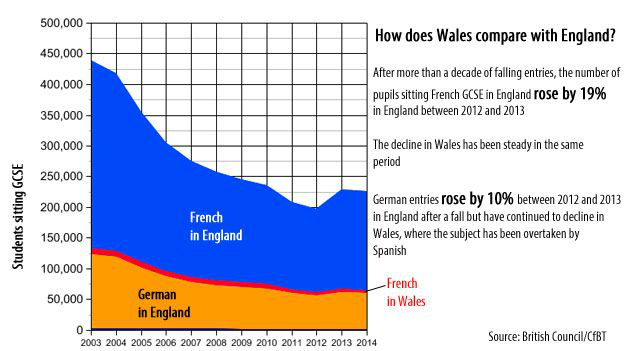 What should be happening, too, is the promotion of MFLs greatest asset - all the media and things to do it opens up to you. Learning Welsh can be an uphill and (let's face it) boring experience. There's BBC Radio Cymru and S4C but, you know, S4C is a channel which can and often does devote whole days of broadcast time to such events as Young Farmers' Conference. The reality is that 99.99% of the people interested in Young Farmers' Conference are at Young Farmers' Conference. In contrast, learning a modern foreign language offers you a whole new world of literature, film, music, etc, all readily available on the net. There's no excuse for MFL teaching to ever be boring!


And, of course, what desperately needs to happen is the breaking away from the chokehold of Spanish, French and German. Almost no schools in Wales offer GCSE level Arabic, Hindu or Urdu, and only a handful offer Mandarin. China and India are the power houses of the future, and standard Arabic is the fifth most widely spoken language in the world. Language learning offers so many opportunities and new ideas to people - but you have to make sure those advantages are obvious enough to offset the long hard slog of becoming proficient in it!