The Gloves Are Off

June 09, 2015
I read the most ridiculous story ever earlier on the HuffPost. It originated with the Daily Mail, which should go a long way to explaining the ridiculousness... Anyway, following on from a story last year about how Brits are too lazy to work in sandwich factories and prefer to live on benefits, this week the Daily Mail has informed us that the foreigners employed in their place - and you might want to look away from the screen now if you're of a delicate constitution - often make those sandwiches without disposable gloves. Or, as the DM put it: 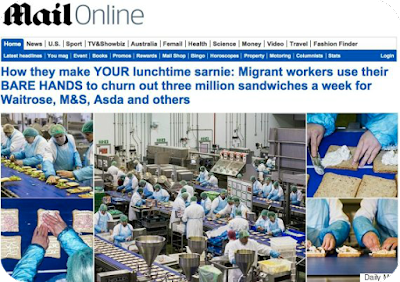 Shocking as it might be to the sensibilities of people who don't prep food for a living, it is often done with bare hands. Some countries insist on a barrier method for ready to eat foods, but the UK is not one of them. Because the thing about gloves is that they can give a false sense of good hygiene. They're not made out of some miracle substance; dirt from hands can still pass through onto food, and vice versa, but people are often much less stringent about not touching their face, regular hand washing, etc, when wearing gloves. You would more than likely notice stray food, juices, or a scrape on your hand - but you may well not on a glove, increasing the chances of cross food contamination and pieces of torn glove ending up in someone's lunch. 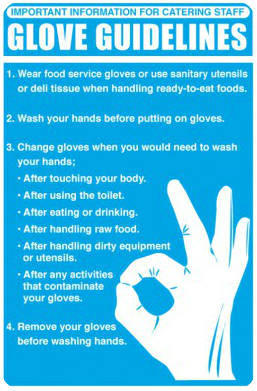 If gloves are not used properly the risk is amplified - the moist environment inside the glove is a bacterial paradise.

The comments, naturally, were full of people vowing never to eat pre-packaged sandwiches again. It's like we've become so fundamentally divorced from the process of food preparation that we picture it all being done by machine, in a completely sterile environment. I don't wear gloves to make a sandwich at home, and I wouldn't expect a friend or relation making me a sandwich to do so either. In a food prep environment, with regular hand washing and stringent health and safety procedures, the risk is way less than in either of those scenarios.

Though they are migrants, of course. And in the strange place that is the Daily Mail's filter of Britain, I expect a foreigner touching your food is almost as bad as having to live next door to one...