Pulling Up The Ladder

July 09, 2015
For a party that loves to scaremonger about debt, they sure want to make certain most of us are in it. George Osborne announced yesterday that means tested university grants will be axed in favour of loans. That's on top of the £9,000 loan they already want students to take out to cover tuition fees. By the time the average student graduates, they will now owe over £60,000. With the job market in the state it's in, many will ask themselves whether it's worth it. And, when numbers fall, it's the universities who make the cutbacks.

As far as I can see it's all about ensuring the working classes stay in their place. They talk about aspiration, but it's not aspiration for kids growing up in social housing whose parents are being given the stark option of staying in low paid work or having their secure tenancy removed. It's not aspiration for those who see their older siblings scrimp, and save and starve to avoid being saddled with debt, then leave university to join the dole queue and be called 'shirkers' and 'scroungers' by those whose idea of starting at the bottom is asking Daddy for a favour. 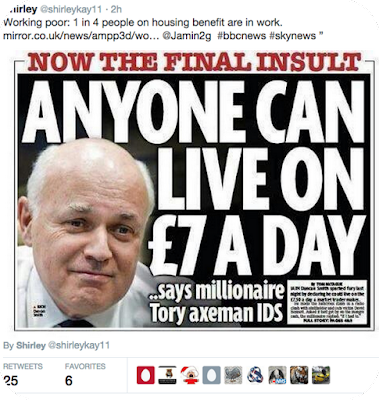 Why not £7 a week? We're all in this together, after all.

Osborne says he's offering young people the option of 'earn or learn', which is shorthand for saying he's yanking up the ladder into higher education while simultaneously ensuring young people have little resource to the welfare state when the Chancellor's assurances that we're 'a country moving towards a full employment economy' are proven to be so much hogwash.

At 20 you're old enough to be sent off to die for your country, but not old enough for your country to pay you housing benefit. You're an adult when it suits, but a strange half child when it doesn't. The living wage that the Tories are all patting themselves on the back about will not apply to the under-25s, in line with the DWP's view that 24-year-olds need £16 less a week to live on while looking for work than their 25-year-old counterparts.

At the end of the day, it's all elementary to the Tory Cabinet. It won't affect them, and it won't affect their children. Tory MPs can look forward to a guaranteed annual income of £74,000 for the next five years. I wonder how many of Cameron's 'Lidl People' can say the same...