* Pictures in this post found via eBay, I claim no ownership *


Telsalda were a typical cheap 1960s toy company - they sold plastic cars, plastic boats, plastic rockets, and, of course, plastic dolls. (In addition to clothing and other cheap tat.) The only difference between them and most Hong Kong manufacturers was that Telsada was actually a London based import company; they had begun buying textiles from the Far East back in 1890.

There was something of a vogue in the 1960s for dolls with wigs - the most famous being 1963's Barbie and Her Wig Wardrobe - because why just change your outfit when you could change your hair colour and even style too? Telsalda decided to go one better. Instead of wigs, their Sindy clone doll came with three interchangeable heads:

They still made the standard wig doll too, though she uses a slimmer head mold: 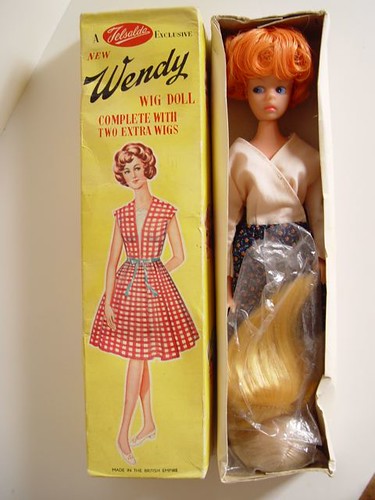 If this was just too much glamour for you, there was a super basic rooted version:

Back Image - Close Up.

Telsalda also had a Patch clone called Cheeky, again both as a wigged doll and a rooted hair doll with interchangeable heads. Here's the only picture I could find (from HERE), of the wigged version:

The regular versions could be bought together, as seen here:

Please note: photos are not mine - they are Flickr embeds or were found on ebay.