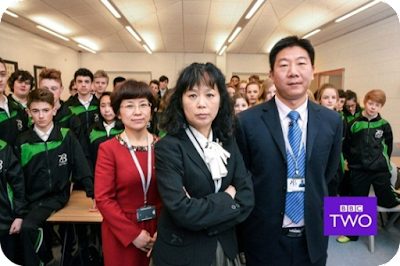 I'm loving BBC2's Chinese School at the moment. Last night's episode brought back all the most horrific memories of my time in school based youth work. A lot of what goes on in the classroom - especially in a large mixed ability group like the one in the show - is crowd control. I mean, just think back to every time you ever had a substitute teacher. If kids think they can get away with it, they will just push, and push, and push. It's about testing the boundaries.

But, in truth, the Chinese classroom set up just seems designed to encourage bad behaviour from students who haven't spent their whole lives being indoctrinated into obedience. They're crammed in like sardines, tired from the early starts and late finishes, and bored to tears with being lectured at when they're used to learning by doing. They bounced off each other, becoming more and more unruly, and the poor Chinese teachers lacked the classroom management skills to do anything about it. 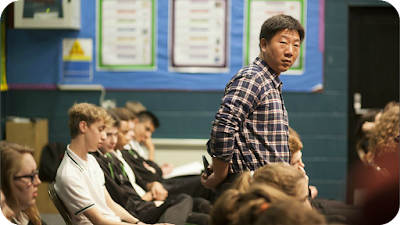 Back in China maths teacher Mr Zou ends his lessons to applause; in the UK year 9 struggle to stay awake.

Some of the Chinese teachers felt that the kids weren't bothering to try because of the welfare state. They're just looking forward to their £57.90 a week. ...Right. I think, in the case of Bohunt, it's more to do with the aforementioned tiredness and boredom. More widely, I'd argue it's a lot to do with the fact that the UK has been dealing with the crisis about to face China for a number of years now, namely the crisis of youth unemployment. No matter how good your grades, it's no guarantee of work. In fact, in many ways good grades can be a hindrance. Employment agencies (and the DWP) advise graduates to 'dumb down' their CV to secure the work that is available: low paid and low skilled.

China is well on track to suffer the same problem.

Paul Willis' excellent work on anti-school culture shows quite clearly what can happen when aspiration hits the glass ceiling of reality. When you can't be - or can't see the point of being - the brightest, it's better to be the funniest, or the rudest, or the most successful with the opposite sex. Because being popular is going to be what makes life bearable when you're stuck in that low paid, low skilled job.

Chinese social media users have used the show to criticise their education system, and its lack of focus on creativity and asking questions. I guess that's the real difference in China, at least for the time being. Young people, by and large, still have faith in their elders to find a solution to the problem. Age brings wisdom, and all that jazz. In the UK ...not so much. We don't have the media and internet censorship China has, nor its culture of trust in authority figures, and young people are well aware that their qualifications might end up not even being worth the paper they're printed on.

That Bohunt managed to keep its students motivated regardless was a big positive for UK education. Still, if there's one thing British schools could take away from the experiment, it's the idea of taking responsibility for your own learning. Of taking care of your learning environment, and being proactive when it comes to further study. When effort is well rewarded peer effects can be used for good just as well as it can be used for bad.

Maybe ditch the snazzy tracksuits though. 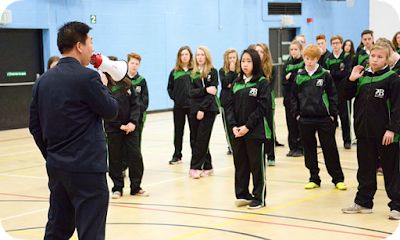