Outlander is now an award winning TV show and, from the few clips I've seen, doesn't look too bad. Still, I figured I ought to at least try and read the book before watching it. I say try because I knew Diana Gabaldon, its author, more by reputation than output: 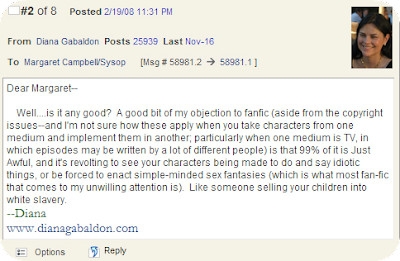 Gabaldon explains how fanfiction is like white slavery. Seriously.

What raised that rant from the realm of the ludicrously unreasonable to the utterly hilarious is the fact that Gabaldon happily admits to basing her own romantic hero, eighteenth century highlander Jamie Fraser, on eighteenth century highlander Jamie McCrimmon, a character she spotted in a re-run of Dr Who. We can only guess how Terrance Dicks and Malcolm Hulke feel / felt about seeing their character say idiotic things like: "Aye, I mean to use ye hard, my Sassenach", and enact simple-minded sex fantasies along the lines of: "he pressed me down, hammering me, a solid, inexorable pounding that reached my womb with each stroke." (!!)

I like to think this gif of Patrick Troughton sums it up:

Nevertheless, I did my best to go in with an open mind. And the first few chapters, set in post-war 1940s Scotland, are actually pretty good. It reminded me of all those lovely 1970s British timeslip shows like Children of the Stones, Come Back Lucy, and, well, Timeslip. Claire, the main character, then finds herself sent back in time by a nearby circle of standing stones. So far, so good. But it only ever hits that early level again in fleeting spots.

Don't get me wrong, most of the book is perfectly readable. It just drags too much in places, and is repulsive in others. Scenes like the one where a redcoat comes across the newly married Claire and Jamie in the act, so they kill the redcoat and carry on makes it clear why Starz wanted it to be their version of Game of Thrones. The time travel's alright, the history is decent, the romance isn't too bad in the second half of the book, for all that it's still more of the Fifty Shades kind. Overall it's okay. 3 out of 5 stars. Nothing to set your world alight.


But I could never quite shake that image of poor old Jamie McCrimmon. No wonder he was so keen to go travelling in time and space...