Living on the Edge - understanding the poverty threshold

October 16, 2015
The Campaign To End Child Poverty recently highlighted the fact that 27.58% of children in Torfaen are living in poverty. Our neighbours fare much the same, with 30.23% in Blaenau Gwent and 28.68% in Newport. Those are some shocking statistics, but what do they actually mean?

Using this definition the figure for children living in poverty in Torfaen is actually 17.45%.

To illustrate how it all works I decided I would use our household income as an example. My hatred of maths soon made me regret the decision, but I stubbornly stuck to the plan -

Our main income is my wage, £13,175 before tax. (The IRPW - Independent Remuneration Panel for Wales - basic rate is actually now £13,868 but the Torfaen Labour group, like many other councillors, chose to turn down the increase. Yeah, it was pretty painful...) After tax it's c. £12,050 - I used THIS tax calculator.

But, there is another way of calculating poverty which is preferred by groups like the Campaign to End Child Poverty, because it gives a more accurate picture of spendable income. This is income after housing costs, and it's this method which gives the 27.58% figure for Torfaen.

Still, what I hope this shows is the relatively wide variance between the two methods. In terms of my own example, in AHC poverty there's not much leeway, but we're okay so long as we budget properly. BHC poverty is a more serious problem - we spent some time there and it was nigh impossible to cover the basics, let alone fancy luxuries like bus fares and the TV licence. Nobody really wants to be in either, obviously, but it is useful to bear the distinction in mind when figures are being bandied about because the two are quite different. 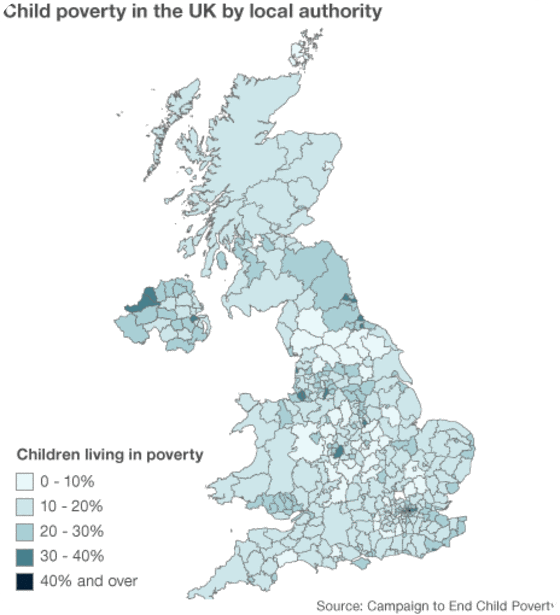 Map of child poverty in the UK using the AHC - After Housing Costs - figures.