The Murder That Never Was

October 06, 2015
A/N: This was 'Blood Alley's' swan song, before both Miller's Court and the whole north side of Dorset / Duval Street were demolished in 1928 to make way for the London Fruit and Wool Exchange.

This is alleged to be a late photograph of Miller's Court and, though it could just as easily be one of the many other courts in Spitalfields, it gives a good idea of the dimensions of the place.

Jane Williams of Miller Court, Duval Street was found dead in her room on Wednesday December 29th, 1926. Later that same day Joseph Carson turned up at Bow Road police station to confess. Under caution he told police: "I have murdered a woman at Spitalfields today. I have come to give myself up. I cannot stand it any longer." He explained the victim was: "Jennie Williams, in a court off Gossett Street, Spitalfields, opposite a church. It was just before 12 o' clock today. I strangled her."

Carson, a 65-year-old inmate of West Ham Union Workhouse, didn't perhaps seem the most likely candidate, but the police were bound to investigate all the same.

The top line is probably our Jane Williams, being a resident of Stepney. If correct, she was 66 years old.

On Friday December 31st Carson appeared before Old Court police court. Mr Clarke Hall asked him if he had any questions to ask after the police sergeant had presented his case. Carson responded: "I did not do anything. The woman was dead, I found out." Hall went on: "That may be. We will inquire into that later on, but if you agree that what the sergeant has said is right you need not ask any questions."

"I do not deny I was upset," Carson said, "and may have said anything like that [confession], but I do not agree with it now. I know I did not murder that woman."

Detective Inspector Boreham asked for, and was granted, a remand so a post mortem could be carried out.

Reporting on the police courts in the Nottingham Evening Post, December 31st 1926.

The coroner's inquest was held on Saturday January 1st 1927 at Stepney, presided over by Dr R L Guthrie. Carson's confession was first related by a police sergeant, and then Dr R M Bronte reported the findings of his post mortem. He said there was no evidence of any injury or strangulation whatever. The Chelmsford Chronical of January 7th reported that "it was quite a natural death."

When Carson was given his chance to speak, he said: "It was a lie I told the police. I never strangled her." In response to Guthrie's 'were you in drink?' Carson went on: "No; I had only half a dozen drinks. You cannot get drunk on two shillings."

Summing up, Guthrie complained: "You were a foolish old man to give the police all this trouble." To the jury, Guthrie apologised, "I am sorry, gentlemen, that you have had all this trouble over a silly old man." 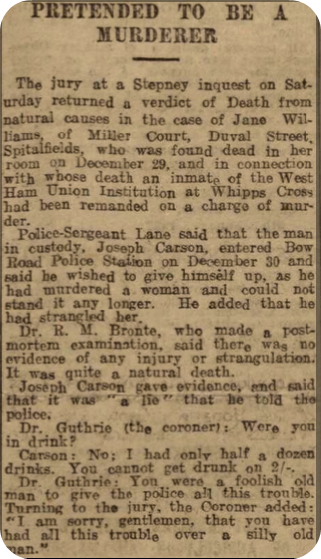 On Monday January 3rd Carson found himself back before the police court. A detective reported the events of the inquest, and said he thought Carson was under the influence of drink when he made his confession. He was duly discharged.

Perhaps Carson really was just a silly old man. Or perhaps, just perhaps, he had had a sudden paroxysm of guilt over a murder he committed almost 40 years before in another little room in Miller's Court...