August 20, 2016
Algie the Miner is a 1912 one reeler produced by the legendary Alice Guy. Starring Billy Quirk as the titular Algie, the film follows his metamorphisis from good for nothing effete into a rugged 'man's man' of the Wild West. Still, he manages to pack in plenty of stereotypical 'sissy' behaviour along the way, and what must be some of the earliest male/male kisses caught on motion camera.

Here is the story in gif format:

I've put together a similar gif post on Tumblr for ease of sharing.


Alternatively, you can watch the whole thing on YouTube: 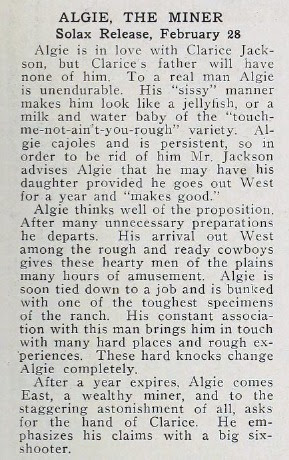 Manufacturer's film synopsis from Moving Picture News, February 17th 1912. (The collected issues for the first half of the year are available to read online HERE.)

The same issue had a shorter blurb for the film (see analysis section below), in an advert for various upcoming Solax pictures. They had been pushing Quirk's comedies throughout the year, claiming he was 'known everywhere and to every one' in addition to being the highest salaried comedian in the business.

Some analysis from people who are good at that kind of thing:

" Preceding Judith of Bethulia by one year is Algie the Miner, a one-reel Solax production, directed by the world's first woman director, Alice Guy Blaché, and with Billy Quirk in the title role. Despite Algie's being heterosexual, the performance that Blaché has Quirk deliver is totally effeminate and perpetuates a gay stereotype. Algie the Miner may or may not be a pioneering gay film, but it is one of the first in a fairly long line of Western shorts in which "dudes" from the East come out West and are perceived as effeminate by the local cowboys. "

" Algie the Miner (1912) was produced and supervised by Alice Guy-Blaché, who often seemed to zero in on provocative subject matter, even in trivial short comedies. (Leave it to the French, albeit a transplanted French woman working in New York.) Algie (Billy Quirk) is heterosexual only in that he has a girlfriend. Otherwise, he's a card-carrying flamer. Even this early, all the mannerisms are there for the filmmakers to heighten and caricature: the dandified air, fluttering hands, pursed and apparently rouged lips, sly smile, and eyes that he bats while fondling the barrel of a pistol which he examines as if it were cloisonné (or something less elegant). He is sent west for a year by his fiancee's disapproving father to prove his manhood. Even before he gets to the mining camp, his nelliness gets him in all manner of trouble, as when he asks two men for directions and they pull a gun. When they decide not to shoot him, he shows his gratitude by kissing them. Eventually he bonds with a butch character named Big Jim, strikes it rich, and returns home a tougher man without makeup to claim his bride.

Algie's queerness (or, if you like, effeminacy) shows through in everything he says, does, and is. One visual detail in particular stands out: a pair of outsized tapering Joan Crawfordish cuffs that give him the look of a debauched pilgrim. Costume and accessory cues would be the norm for such characters for many years to come, setting up an easy shorthand that something is in the air. The flower in the lapel, the little mustache, the waving handkerchief were all ways to code a gay man's presence onscreen. (If the films had been in color, there would also have been red neckties and green carnations.) For lesbians, a jacket and tie, slicked-back hair, and an occasional cigar or monocle would do the trick. The code words were important too: dearie, whoops!, lavender, fairy, and the double edged pansy. In movies, quick communication carries a far higher premium than subtlety or even accuracy. Yet Guy-Blache and her crew gave Algie and audiences an escape clause. Despite everything we see, he is capable of a quick overhaul to conventional he(te)roism, something not unlike the transformations espoused today by certain right-wing moralists. Algie thus has the distinction of being cinema's first queer tease, and possibly one of the rare examples of successful conversion therapy. "

" We can, perhaps assume that Algie the Miner was intended to be read as gay. ...  And yet Algie has a girlfriend, and returns to her at the end of the film despite seemingly enjoying his adventures in the West with his male companions. Rather than an inconsistency, this is arguably a reflection of the experiences of many gay Americans of the time."

" Guy also explored the idea of men taking on women's roles using role-reversal without cross-dressing. One of the best examples of this is Algie the Miner (Solax, 1912) directed by Edward Warren and Harry Schenk, with Guy credited as "producer and directing supervision." The Solax ad summarizes it as follows:

What is interesting about this summary is that it is actually fairly different from the film. In fact, Algie's sweetheart appears to be quite attached to him, no matter how foppish he is (his sissiness is indicated by white-face make-up and white gloves). It is her Father who objects, and when Algie asks for his daughter's hand, her father writes a note promising that Algie can marry his daughter if he can prove himself a man by going West for a year. Dad thinks this will get rid of Algie for sure, but Algie signs the note in great seriousness. The daughter is clearly bereft when he leaves. ... It seems clear ... that Guy was aware of the homosexual subtext implicit in her cross-dressing films and deliberately chose to exploit it in this film. " 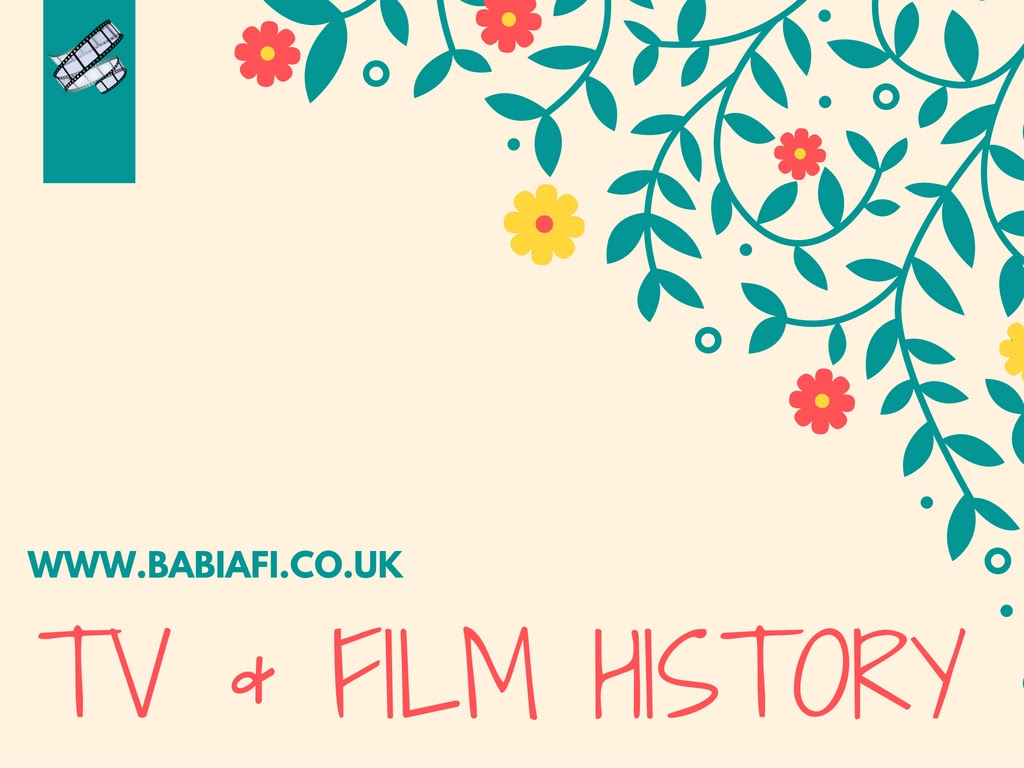