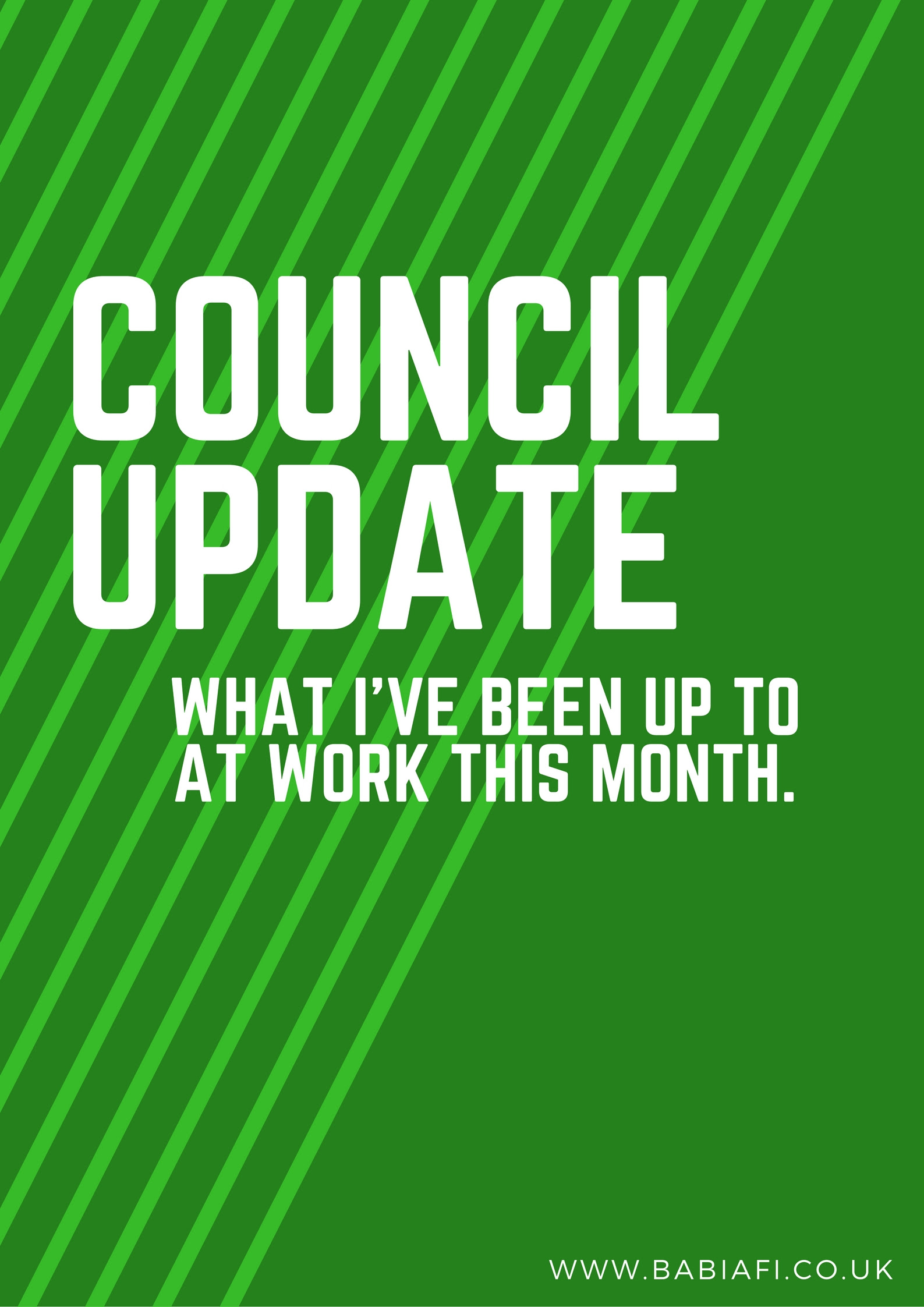 This is the second installment of this council update series - you can find my September update HERE - and it's probably going to run quite long as it's been a busy month. This morning I'm off to chair my first meeting of Full Council, filling in for the Mayor, so wish me luck! :)

The first real matter of business was Item 7, Public Question Time, with some questions about potential development of the 'British' (an old iron works and colliery site in Talywain) from John Cox.

Item 9. Full report on the acquisition of the British.

Item 12. Report on the resettlement of refugees and vulnerable children in Torfaen. Just confirming Torfaen's commitment to the VCRP (Vulnerable Children's Resettlement Programme) and the UASC (National Scheme of Unaccompanied Asylum Seeking Children). We also support the SVPRS (Syrian Vulnerable Person Relocation Scheme), with three Syrian families already settled in Torfaen, and another three due this financial year.

Item 14. Just formalising the scrutiny arrangements for the Torfaen PSB (Public Service Board).

Item 15. Noting the outcome of a complaint under the local resolution protocol. Cllr Harris put a complaint in against Cllr Mawby, over an incident at the June meeting of the Safer Scrutiny Committee when Cllr Harris' suitability as chair was called into question. (The Mail covered the story HERE.) The committee decided there was no basis for going further with the complaint.

Item 16. An extension to the period a Councillor can go without attending a meeting before being disqualified for Cllr John Marshall, who has sadly been very ill for some months.

You can watch the whole thing on webcast HERE.

We (the Pontnewydd Councillors) hold our advice surgery on the first Saturday of every month, from 10:30am - 12 noon, at Mount Pleasant Hall. We're in the 'green room' where the bar is, and the main hall has Zumba classes going on. You won't confuse the two! I don't really write much about casework on the blog because it's confidential and fairly repetitive to boot, but we deal with all kinds of issues. The most common problems will be things like neighbour disputes, litter / potholes / overgrowth / other streetscene issues, people getting nowhere with Homeseeker (the housing waiting list) or their RSL (Registered Social Landlord), etc. We can't always resolve the problem, for a huge range of reasons, but we'll do our best to at least signpost you to someone who can.

There was a full council meeting on October 5th (agenda HERE). There wasn't anything controversial, and the biggest issue was probably the policing update which I've written about below. The next CCC public event is the Senior Schools Choral Festival on November 10th (6pm - 8:30pm); it's being held at Cwmbran High School and I think tickets are available from the Council House. (See more on their Facebook page.)

I think there was a sub-committee meeting for Croesy this month, but I couldn't make it. I've got a governors meeting at Maendy Primary tonight and I'll be giving apologies for TASG (Torfaen Association of School Governors) tomorrow. I did attend a seminar on the play service yesterday though, and the team did a great job again over the summer holidays, providing play opportunities. Check out their video overview -


Also on education, a consultation opened yesterday and will run until November 28th, looking at reducing the 11-16 capacity of Croesyceiliog Secondary to 1,200 pupils, from the current c. 1350. It wouldn't affect current pupils, but will mean a reduction from nine form groups to eight from September 2018 admission. (The idea is to reduce the number of pupils attending from outside the catchement area.)

Veronica, the mayor, has had to have a knee replacement operation so I've been pretty busy covering the mayoral engagements over the last few weeks, including:

If you want the mayor to attend an event, or would like your group, etc, to visit the mayor's parlour, just put a request in through Chris Slade in Democratic Services via democraticservices@torfaen.gov.uk or ring 01495 742163.

- Torfaen Well-being Questionnaire. Let us know what you feel is good and bad about your community.
- Proposed Changes to the Churchwood and Springvale Ponds Local Nature Reserve.

Planning Committee is a monthly affair, this time it fell on the 11th. There were six applications to deal with; an update to flood zone conditions for an industrial development in Llantarnam (approved), 21 unit housing development on Belle Vue Road in Old Cwmbran (approved), confirmation of the reasons for rejecting a change of retail use for the gun shop in Pontnewydd, a standalone Flying Start Learning Centre on Blenheim Road Primary School site (approved), and erection of a pole mounted CCTV camera and an Eco Schools flag at Garnteg Primary School (approved). You can watch the meeting on webcast HERE.

From 10am - 11am on the second Saturday of the month there is a police advice surgery for Pontnewydd, again in the 'green room' at Mount Pleasant Hall. Zai, our local PCSO, is super nice and will do his best to help you with any policing related issues you might have, from drug related offences through to obstructive parking. I missed it this month as I was doing mayoral stuff, but I did get a crime stats update at Community Council.

Anti-social behaviour is generally down, but there have been a spate of break-ins and so on committed by a group of boys from Greenmeadow. In one night they broke into two youth clubs and smashed a bunch of windows en route! We've also had a few clown sightings, but I think the first fine issued by Gwent Police for the craze went through last week in Caerphilly.

I had two scrutiny meetings this month. First up was Healthier Communities on September 29th (webcast HERE) looking at the impact the new benefit cap will have on Torfaen. There are about 160 households (including over 500 children) which will be affected, almost all with complex support needs, spread over the RSL and private rented sectors. It was reassuring to hear that the visits by the Revenue and Benefits team are going well, and that Torfaen is being so proactive about finding ways to make up the shortfall.

Resources and Corporate Business Scrutiny, held on October 12th, followed a fairly similar theme, looking at DHP (Discretionary Housing Payments) capacity specifically. Torfaen has a fairly generous DHP scheme which is currently being used to keep people affected by the 'Bedroom Tax' afloat. Because, shockingly, a policy designed to ease housing pressure in the densely populated cities doesn't work quite so well in an area where the vast majority of your housing stock are 3-bed family homes. I digress. Anyway, I'm convinced that Revs & Bens are trying their best, but I'm not at all sure the scheme is sustainable as is. Torfaen currently pays out an extra £150k or so on top of the government subsidy, and most of those affected by the benefit cap will now be looking to claim DHP in the near future... You can see the webcast of that meeting HERE. 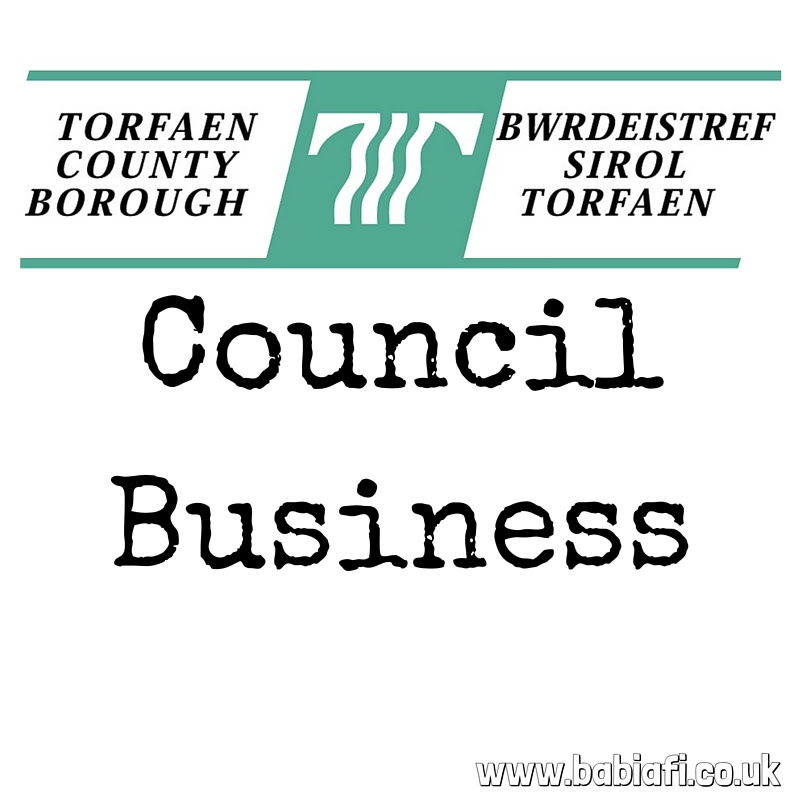