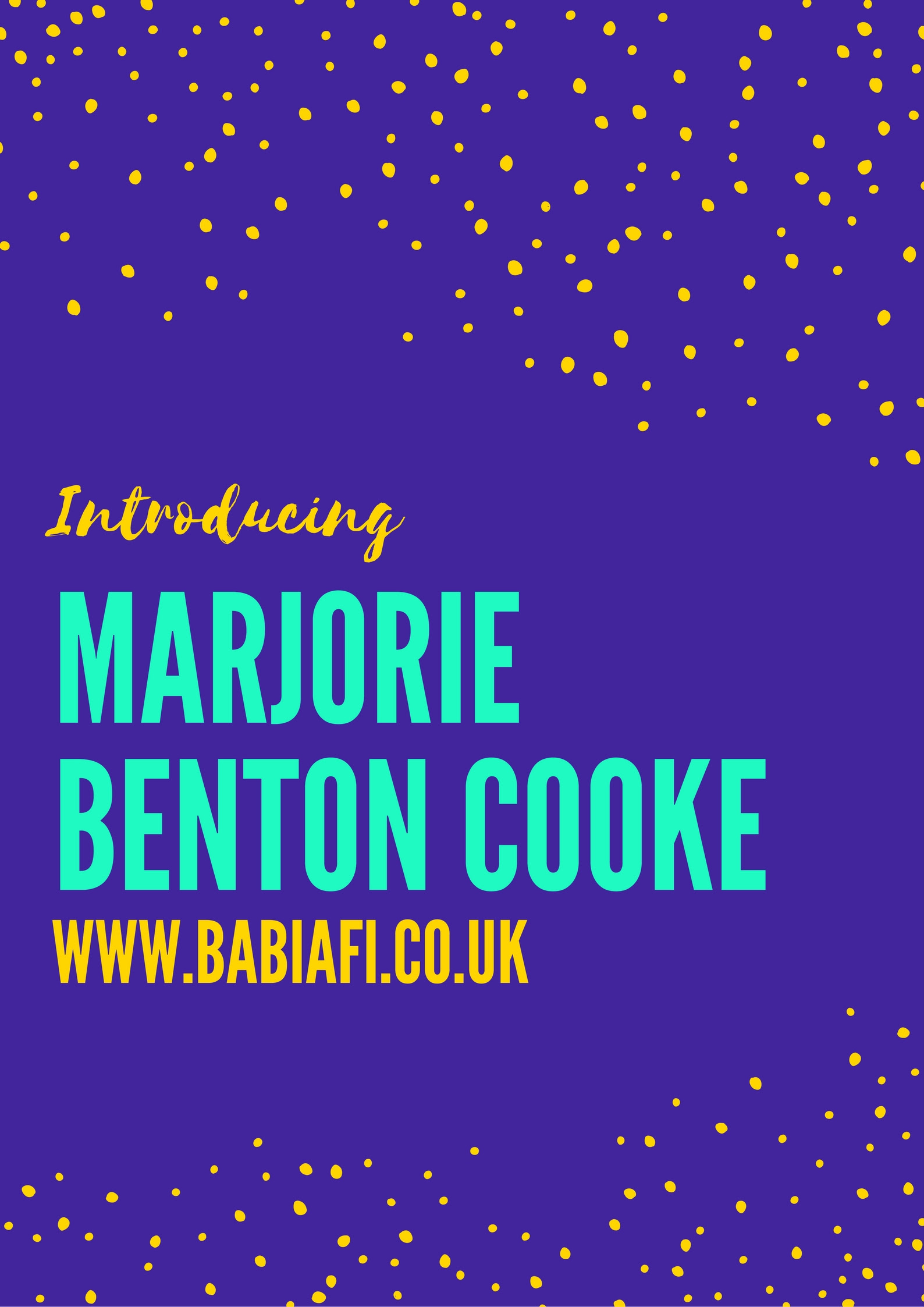 I first stumbled across Marjorie Benton Cooke through my innate cheapskateness - I was looking for something to read on Kindle, and her 1914 novel 'Bambi' popped up. I gave it a whirl and was instantly enchanted because I love contemporary romance, providing that it was contemporary before 1930. 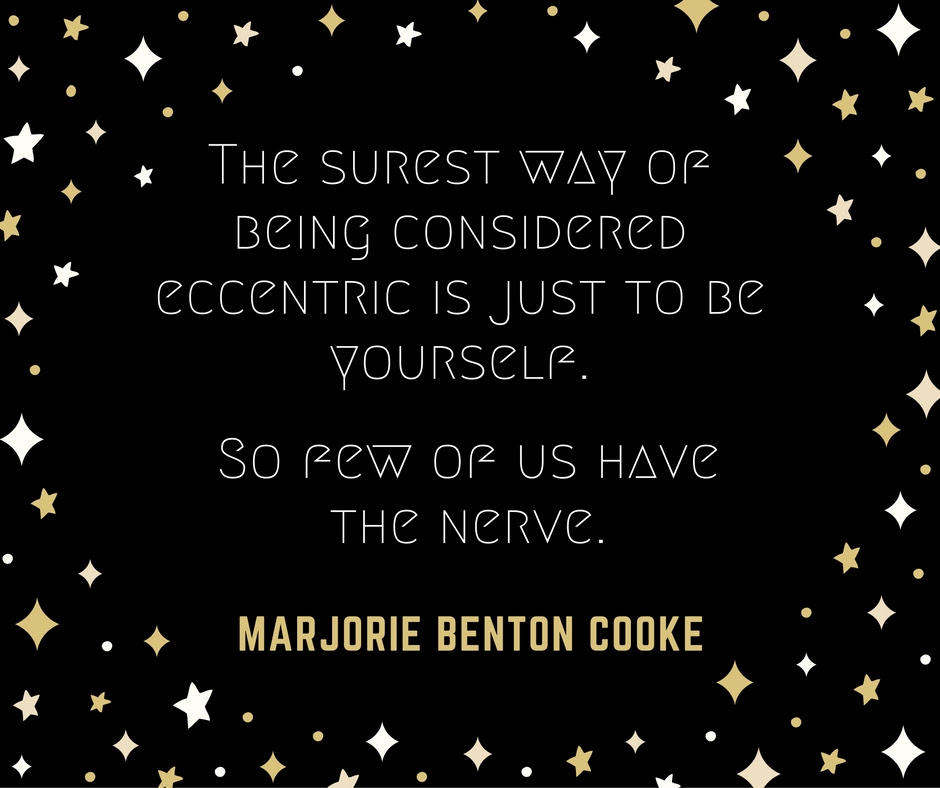 Since then I've really enjoyed working my way through her bibliography. She uses so many of my favourite tropes - the marriage of convenience blossoming into real love, and having characters from one book pop up in another, so that her whole literary universe is interconnected - and her writing is still fresh and amusing. My absolute favourite is The Cricket (1919) which never fails to make me laugh, cry, and dream up a thousand different scenarios for what happened after the final page was done with. We'll never know for real because Cooke had no chance to write a sequel; she passed away on April 26th 1920, aged just 43, after contracting pneumonia while on a world cruise with her mother.

The thing about The Cricket is that it tackles themes most authors would be leery of today, let alone almost a century ago. Take this discussion between Isabelle's (AKA the Cricket) parents on her fourth birthday:

"Look here, Wally, don’t begin on that mother stuff. I didn’t want her any more than you did, and we were fools to have her. That may be abnormal, unnatural, and all the rest of it, but it’s the truth, and there are lots of other women just like me. You can’t lump us, any more than you can lump men. We don’t all of us have the maternal instinct, not by a long shot."

"There you go. It’s all right for you not to want a child, but it’s indecent in me. That’s a man-made idea, and it won’t work any more. Lots of us don’t find motherhood either satisfying or interesting, and we’re getting courage enough to say so."

Because beneath all the lighthearted comedy and the sentimentality, The Cricket explores a powerful message. Not all women want children, and if they don't it only does everyone more harm than good to push them into motherhood. For instance, there's a real tear jerky scene where we learn that Isabelle, even at the age of 16, writes weekly letters to her imaginary 'regular parents' - a coping mechanism she used in the nursery - who love and cherish her in a way her own simply aren't capable of.

Benton Cooke herself never married or had children. She was born 17th November 1876 to salesman and one time Richmond city treasurer, Joseph Henry and his wife Jessie Benton Cooke. She attended prep schools in Detroit and Chicago before studying at the University of Chicago. Marjorie was very active in university life - her name is all over the relevant editions of The Cap and Gown, the university year book, winning prizes and scholarships, writing and performing in dramatic productions, and sitting on various committees. (1896, 1898, 1899, 1900) Even after graduating in 1899 with a Bachelor of Philosophy degree she served as second vice-president of the Alumni Association.

There are various photos in the yearbooks of groups containing Marjorie but, annoyingly, they aren't matched up properly with names. I'm inclined to say she was the tall girl in the back row, just because to my untrained eye she looks most like Marjorie's younger brother Edson! Here he is in 1901, wearing his University of Chicago football kit - you can also see him in the full team photo, he's the last guy on the right in the back row.

In the years after graduating Marjorie began to carve out a niche for herself as a literary humourist, becoming famed for her witty monologues (e.g. Modern Monologues, 1903 and More Modern Monologues, 1907) and as a supporter of the women's suffrage movement. She wrote plays for schoolgirls and amateur dramatists, song lyrics, verse, and short stories for magazines and newspapers (e.g. The Evening Story in The Duluth Evening Herald, 1906). Finally in 1910 her first novel The Girl Who Lived in the Woods was published, a story which would later be adapted into the now lost silent film The Little 'Fraid Lady, released in December 1920 and starring Mae Marsh.

[I've put together a bibliography of her work - complete with links to read online - HERE.]

Success did nothing to slow her output down. In 1912 she wrote her first film scenario, becoming the short Her Educator for the Selig Polyscope Company, who also produced her The Story of Lavinia in 1913.  Her most famous book, Bambi, was released in 1914 and received largely positive reviews, one of my favourites being 'absurd, but vivacious'. 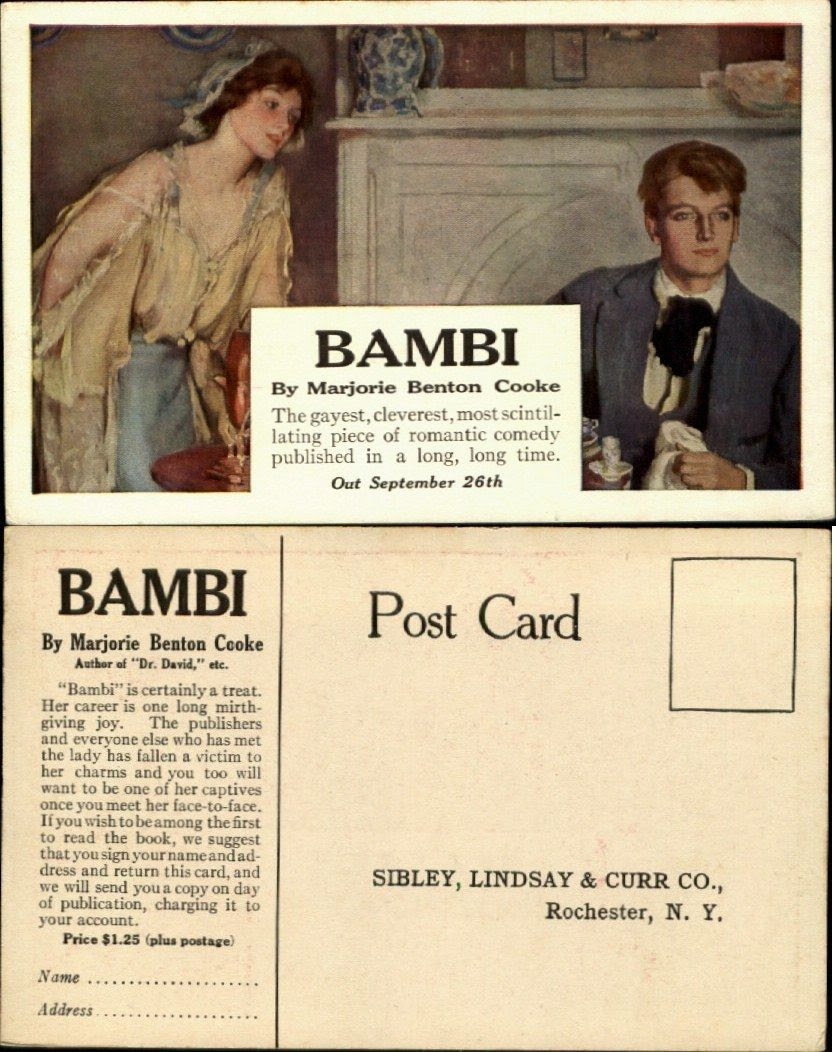 Bambi was followed up by The Dual Alliance in 1915, the tale of a successful actress who marries her accountant and helps him in his campaign to be elected mayor, as an alternative to committing suicide out of sheer tedium. Another 1915 novel was The Incubus, which was later adapted for the screen as Her Husband's Friend - a light rom-com, the film did well for Paramount Pictures on its release in November 1920.

In her spare time, according to her Woman's Who's Who of America entry, Marjorie enjoyed tennis, gold and theatre. She was a member of the Women's University Club in New York, the City Club of Chicago, and The Little Room. (Not quite sure what that one was!)

1917 was a good year, with the publication of Cinderella Jane - a fake marriage between a painter and a want-to-be writer slowly morphs into the real deal - and the release of another Selig short based on one of her scenarios, Cupid's Touchdown, starring the nation's favourite ne'er-do-well, Jack Pickford. Also in 1917 Marjorie contributed a chapter to the round robin novel, The Sturdy Oak, along with a whole host of up and coming American writers including Alice Duer Miller and Dorothy Canfield Fisher. 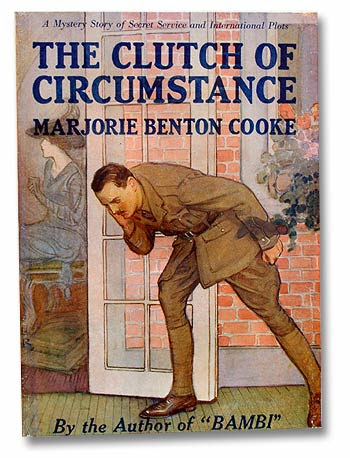 1918 saw the publication of The Threshold and The Clutch of Circumstance. The British press were critical of the latter, bemoaning its Americanisms, as in THIS review from Y Llan on 19th December 1919. It was followed up in 1919 by The Cricket, and the National Film Corporation of America released The Love Call, based on one of her stories. At the end of the year Marjorie and her mother Jessie set off on a world cruise. Her obiturary in Variety magazine said that her home address at this time was 102 East 52d street, New York.

In the months and years which immediately followed her death her work continued to be popular. 1920 saw two film adaptions of her novels, and in 1921 Universal turned Cinderella Jane into The Mad Marriage. Sadly the film is believed to be lost - in fact, the only extant film based on Marjorie's work appears to be Married?, a 1926 comedy. Bambi was adapted for the radio in 1936, with actress Helen Hayes playing the titular role.

Today she is all but forgotten, but hopefully this little blog post will in some way help to rectify that. 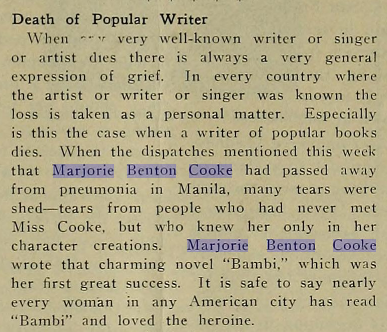