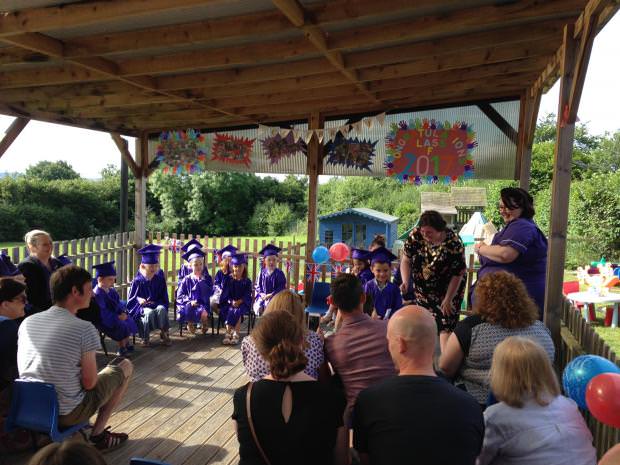 On Monday I went to the cutest event ever - a graduation ceremony at Henllys Village Nursery. They even wore tiny little caps and gowns! There was another ceremony on Tuesday, so I took Marianna to that one as she didn't have playgroup. She was absolutely transfixed by it. :)

MINIATURE mortarboards were thrown into the air by the departing pupils of a Torfaen nursery school at their graduation ceremony. Now in its eighth year, Henllys Village Nursery honours its outgoing pupils by holding a university-style celebration, even if the children are preparing for the next step of their educational adventure.

Stacey Russell, the head of pre-school, said: “It is a proud day for all of us at the nursery, as well as for the children and their relatives. Many of the children have been here with us since they were babies and have grown up right before our eyes. It has been a great experience working with them.”

Each of the 36 children leaving the nursery took part in the graduation ceremony, and the pupils sang a farewell song before throwing their caps aloft.

“It is just a great way for the nursery to show off the children’s achievements with the graduation ceremony before they move onto big school,” added Mrs Russell. “They are moving onto their next steps in their school lives, as we’ve seen them grow from infants into the little darlings which they are. We were fortunate with the weather this year and the first of the three ceremonies has been lovely.”

The children received their certificates from the Mayor of Torfaen, Cllr Jessica Powell, who praised the children on their achievements and labelled the ceremony as one of the most adorable things she has ever seen.