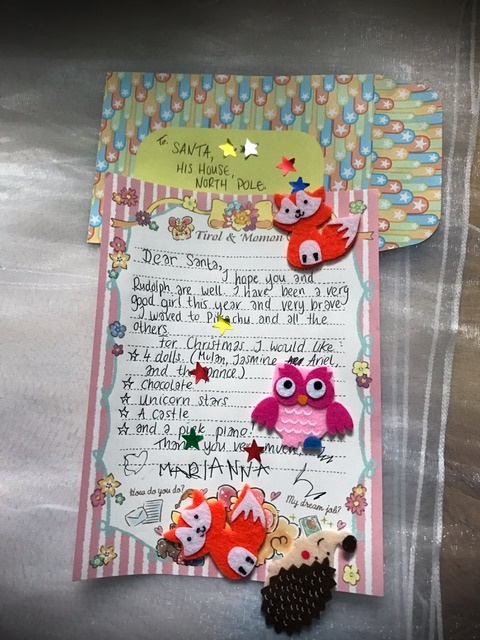 Marianna wrote her first letter to Father Christmas today. Well, she dictated and then decorated it, and I helped her write her name at the bottom. I'm not sure what unicorn stars are, but the rest is already bought and wrapped - mostly by my mum, suggesting that Nanny Wendy is not good at keeping secrets! ;)

When I prompted Marianna to give a reason for why she was a 'good girl' she came straight out with the being brave line. The thing you have to understand about Marianna is that she is terrified of mascots. While the other kids are having the time of their life meeting Paw Patrol characters or Minnie Mouse, Marianna is shrieking and screaming. We went to Pontypool Christmas Cavalcade on November 25th and there were mascots everywhere. Marianna was so scared she was sick down herself.

We went on stage after the parade to help switch on the Christmas lights so there was only Santa and Mrs Claus up there to worry about. Until all the mascots - Pikachu and all the others - started lining up down in front of the stage. I asked her to try and wave to them all like a brave girl, which she did. She's brought it up every day since, wanting reassurance that Paw Patrol and his friends aren't going to come to our house...

On a happier note, we also met Santa who was able to give her exactly what she asked him for: a bar of chocolate!

Meeting Santa at Pontypool Cavalcade - we got to help switch on the lights too! :)
A post shared by Jessica Powell (@plastigffantastig) on Dec 13, 2017 at 5:22am PST