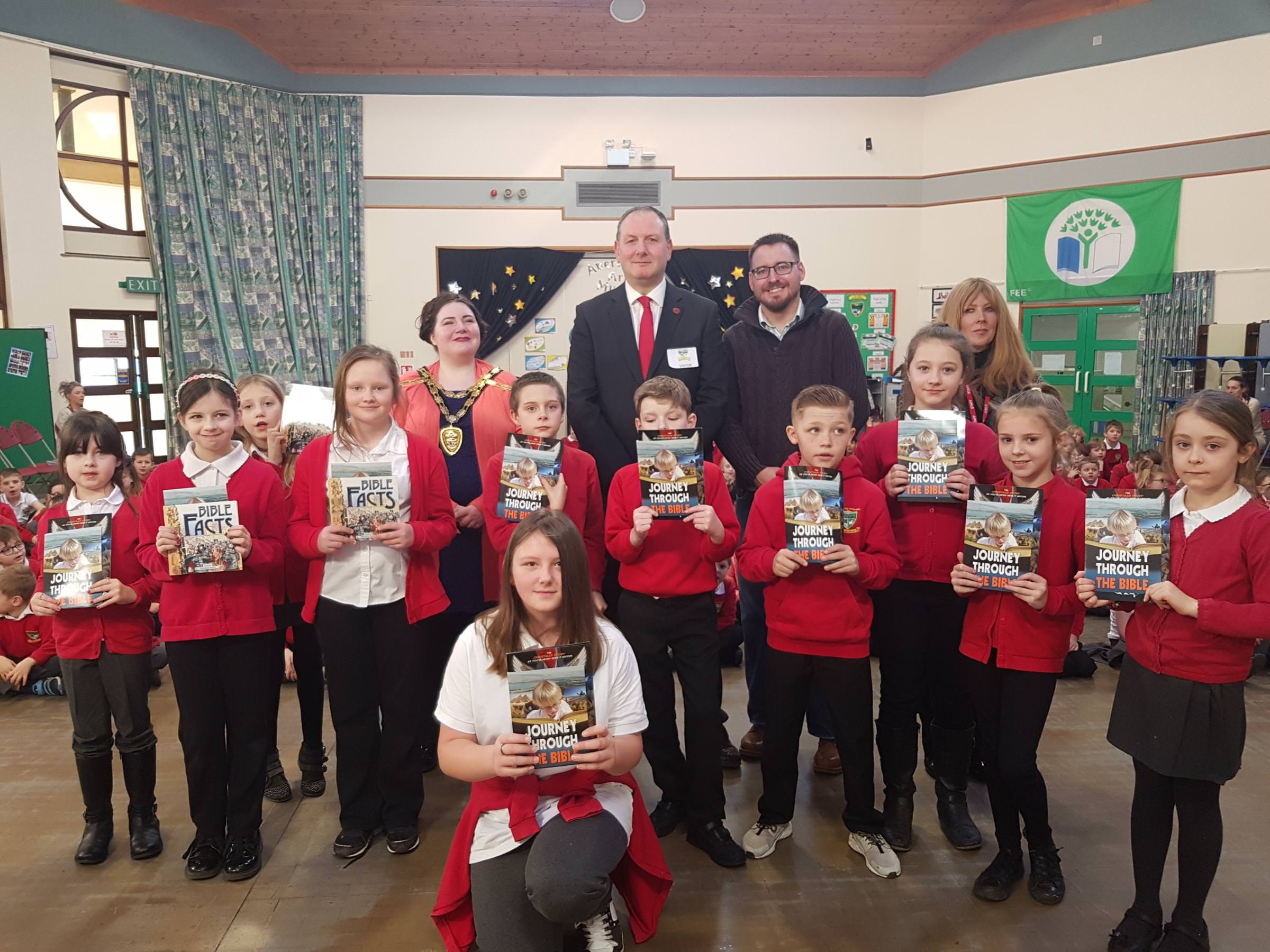 At Garnteg Primary with pupils, headteacher Susan Roche, Pastor John, and Cllr Giles Davies who is very much taller than me!

The thing I love most about being Mayor is getting to visit schools and youth events, so I was really pleased to attend a series of special assemblies recognising the work pupils had put into a project run by Nodffa Baptist Church in Abersychan.

It aims to help deliver some of the primary RE curriculum in a fun and accessible way, and at the assemblies children were receiving certificates and awards for their success in a quiz completed at the end of the project. Pastor John always has such great energy, and it was fab to see the kids singing and really joining in!

Our local paper, the South Wales Argus, came along to one of the presentations at Garnteg Primary and printed a story in the Feb 14th edition:

A church project bringing costumes, workshops and exhibitions into schools has been embraced by pupils and staff in the Abersychan area. Earlier this month, more than 600 pupils across Garnteg, Cwmffrdoer and Victoria Village primary schools received visits from the Noddfa Baptist Church as part of outreach work. In the church visits, pupils interacted with church volunteers dressed up as characters as well as working through graphic displays and filling out a quiz.

Noddfa Baptist Church’s Pastor John later returned to the schools in assemblies filled with fun and laughter where he gave out prizes and presentation packs to each child.

He was joined by special guests including the mayor of Torfaen, cllr Jessica Powell and cllr Giles Davies, of Abersychan ward, who helped gave out prizes.

Pastor John said: “We warmly embrace our partnership with the local schools and hope that such collaboration will inform the children and their families of the many services that we provide for the community as a church.”

The Free Press attended one of the visits at Garnteg Primary School on February 12 which included an assembly and prize-giving ceremony.

Head teacher Susan Roche said: “The whole week last week was great as it gave the children something different. It combined very important aspects of the curriculum like RE, history and the humanities and brought it together in an interactive way which made it very meaningful.” She added that the project could be carried on as it fits within the RE scheme for the term and thanked the school’s RE coordinator Linda Davies for her help during the partnership work.

Cllr Giles Davies added he has worked with Pastor John in the ward for five years and credited his work with schools and the Carols Under the Arch event which attracted hundreds of visitors last year. “Basically, I call Noddfa a beacon of hope for the ward because ever since Pastor John has been here he has brought the ward together,” he said.

Mayor Jessica Powell, added it was “absolutely fantastic” to see how the pupils were engaging with the project. The church is now working with Torfaen Play Service to run a half-term holiday club and for more information on how to take part, search for Noddfa Baptist Church on Facebook.