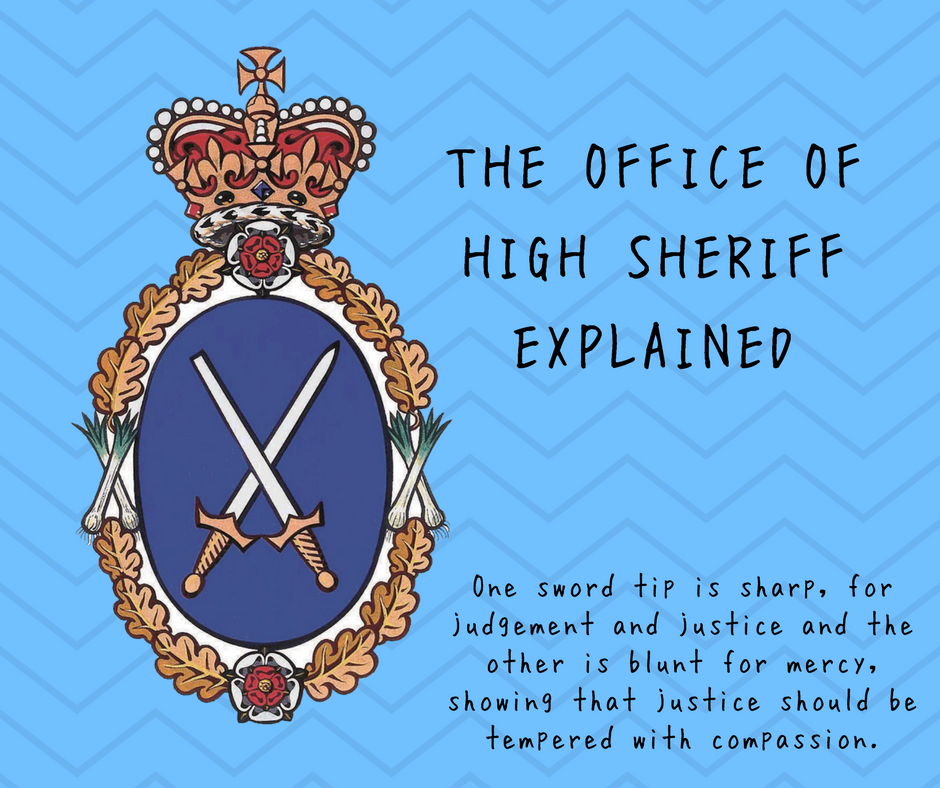 The High Sheriff is one of those roles I had never really encountered before becoming a councillor, but today I had the privilege of attending the swearing in of the new High Sheriff of Gwent, Mrs. Sharon Linnard, at Newport Coroner's Court.

Over the past year as a Mayor I've learned such a lot about this ancient office from the outgoing High Sheriff, Kevin Thomas. Kevin and his wife Elaine are just the loveliest people, and were happy to answer all my dumb questions about what a High Sheriff does and how you get to be one in the first place. 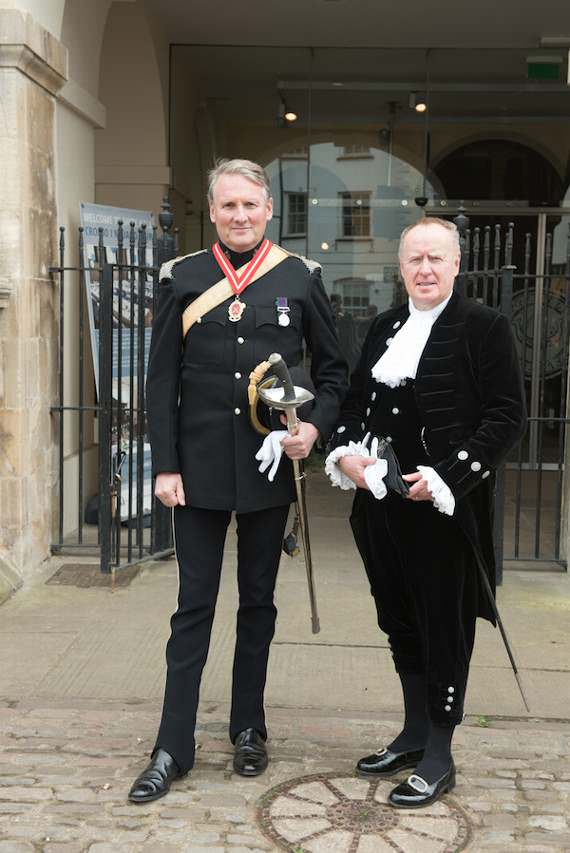 Kevin Thomas wearing the uniform of High Sheriff - traditional velvet court dress - and the then outgoing High Sheriff of Gwent, Anthony Clay. This picture is from a Monmouthshire Beacon article on Kevin's career history.


So, what is a High Sheriff?

The origins of the office date right back to the seventh century when the 'shire reeve' was responsible for maintaining law and order in the shire on behalf of the monarch, and collecting debts and taxes due to the Crown. 1066 brought a lot of change with it, but rather than abolish the post, the Normans only made the responsibilities of the High Sheriff more extensive. In the 11th and 12th centuries, the High Sheriffs were some of the most powerful men in the country.

Over the next few centuries this power was slowly eroded. Tax collection became the responsibility of the Exchequer, and the newly created Lord-Lieutenants replaced the High Sheriff as the Monarch's personal representatives. The evolution of policing and the judicial system also meant that the High Sheriff became an increasingly ceremonial role, something enshrined in law by the Sheriffs Act 1887.

Today the High Sheriff serves for a year, raising money for charity (both local and the official charity of the Shrievalty; National Crimebeat), supporting the Lord-Lieutenant on Royal visits in the locality, and working with local authorities, the judiciary, the church, and law enforcement to promote crime reduction and social cohesion. One aspect of the job remains the same though - the High Sheriff is expected to offer hospitality to visiting High Court Judges. These days though, thankfully, they're not expected to actually pay for the Judges' accommodation! 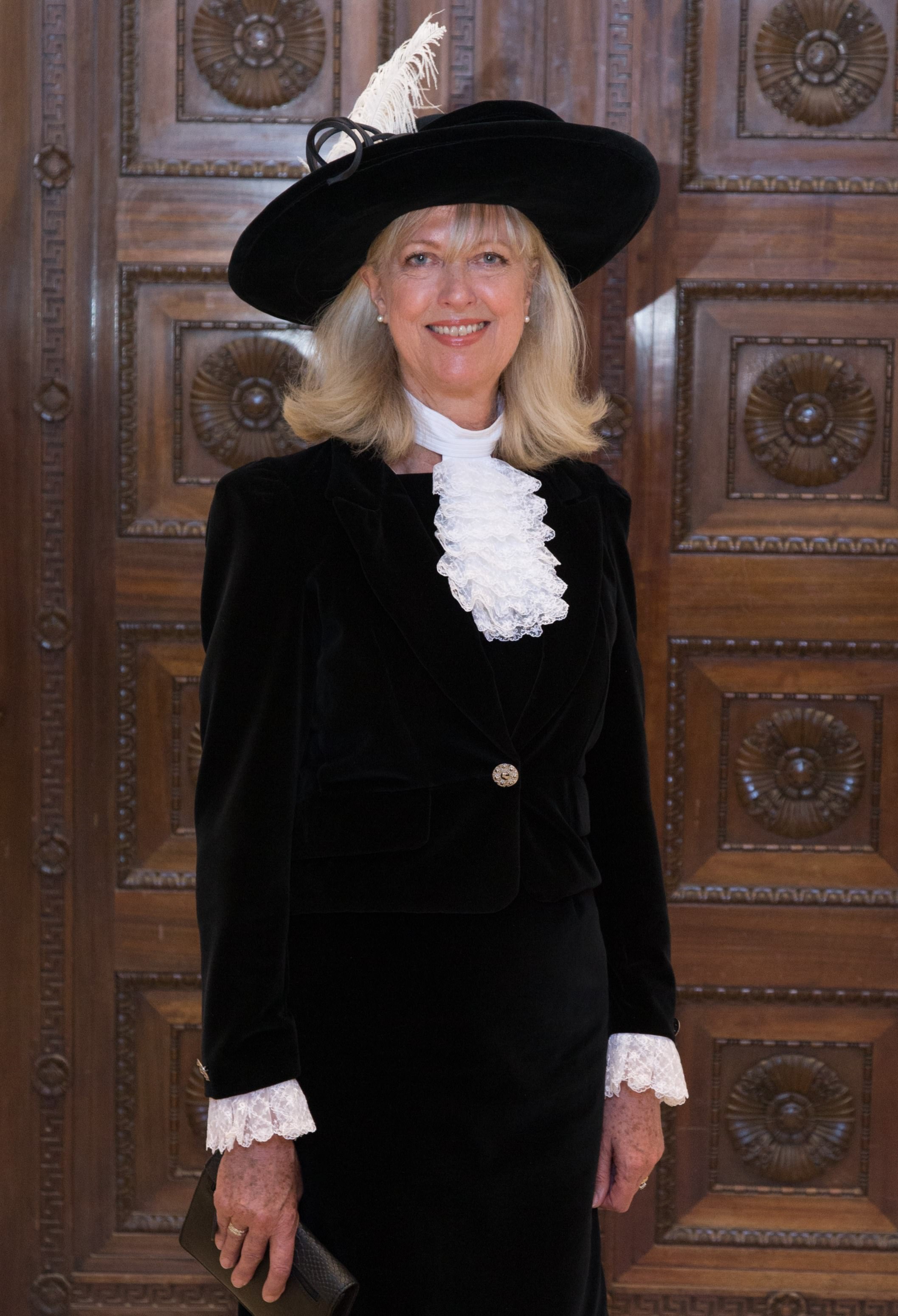 Mrs. Louise Fleet, High Sheriff of West Glamorgan 2017-18. Louise gave a fascinating talk about the history of the Shrievalty at the Mayor of Swansea's civic service last year that I learned a lot from. Female High Sheriffs have no official uniform, so they modify the male uniform as they see fit. Some wear the full get up with knee breeches, some opt for a velvet skirt suit, while others ditch the velvet completely!


How do you become a High Sheriff?

The only legal requirement is that you own property in the county you're to be High Sheriff of. In practice, however, you need to be old enough to have established yourself as somebody of 'standing in the county', and wealthy enough to bear the costs of the role. High Sheriffs are not paid, and are expected to pay for their own uniform (£3,000+, not including the sword...) and the hosting of events. You're probably looking at £8,000 for the year, at least.

Many High Sheriffs are drawn from the magistracy, reflecting the role's links with law and order, but you don't have to be a JP. Everybody's favourite TV gardener, Alan Titchmarsh, served as High Sheriff of the Isle of Wight in 2008, for example! It is important to note that High Sheriff is not a political role though, so Peers of Parliament, MPs, AMs, and MEPs are ineligible, as are clergy, full-time members of the judiciary, officers of the post office, and officers of the Royal Navy, Army or Air Force on full pay.

Every year a consultative panel of about 8 people - the current, former, and future nominated High Sheriffs, the Lord-Lieutenant or representative, and community representatives -  meets in each of the 55 areas served by a High Sheriff in England and Wales. They nominate somebody to serve as High Sheriff in four years time, showing the kind of forward planning required. On November 12th they are then officially nominated in the Queen's Bench Division of the High Court. Three names from each county are presented on parchment to the Sovereign in a February or March meeting of the Privy Council, when the first is ceremonially pricked through with a silver bodkin to confirm their appointment.

This 'pricking' supposedly dates back to Elizabethan times when being High Sheriff was a big financial burden people would try all sorts to get out of. Elizabeth I, not known for sparing her nobles or gentry expense, was having none of that. Instead of using a pen and risking alteration after the fact, she poked a hole through the vellum to ensure her subjects did their duty.

Gwent was also home to the first black High Sheriff: Nathaniel Wells, wealthy plantation owner, magistrate, and son of a slave, was sworn in as High Sheriff of Monmouthshire in 1818.


But what does the High Sheriff do for me?

High Sheriffs are a symbol of community cohesion and the links between the people and the Sovereign, so you can expect to find them visiting schools, attending community events, supporting the civic representatives of their area - and, of course, welcoming High Court Judges and attending court when they are presiding.

They're also busy fundraising and working with the police and related bodies to decide how best to distribute those funds. In Gwent, the High Sheriff works with the Police Commissioner to award over £70,000 of grants to deserving causes via the Gwent High Sheriffs' Community Fund. Applications for next year's awards will be accepted from November.

The High Sheriff is living history in a way - an ancient office that has been re-purposed to remain relevant and provide the kind of quirky flair that makes our civic life so interesting!

To find out more, check the website of The High Sheriffs' Association of England and Wales. The Association also publishes an online magazine twice a year which is a wealth of information. 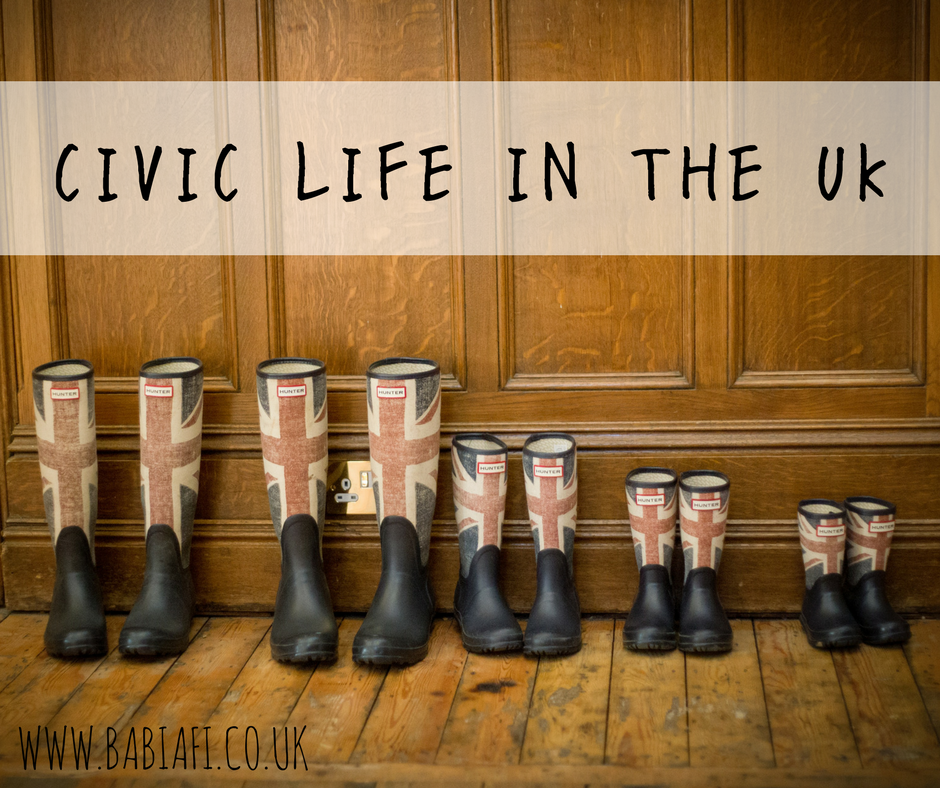