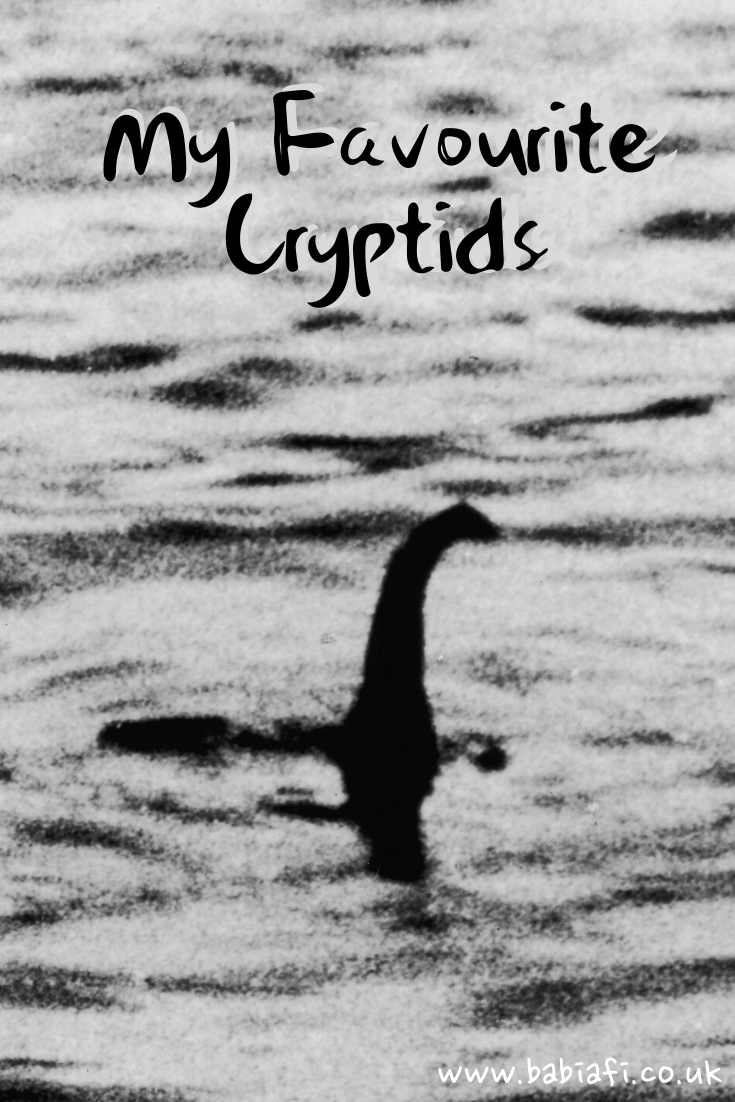 A cryptid is an animal whose existence lacks concrete scientific evidence, but who is nevertheless believed to exist by cryptozoologists on the basis of more anecdotal reports. Here are five of my favourites...

The likelihood that there are big cats terrorising the British countryside is kind of slim to none, given the issues of space, food supply, and those resources having to support a breeding population. And yet... Although the Bodmin Beast is the best known, it's certainly not the only alleged British big cat. They've been seen everywhere from Aberdeenshire to Cornwall, and back in 2000 an 11-year-old in Trellech was mauled by what he claimed was a 'leopard-like' cat. Between 2011 and 2014, Gwent and South Wales police forces alone received 17 reports of big cat sightings.

Some say the cats are ancient survivors of a more wild Britain, perhaps reaching back as far as the ice age, while others suspect they have a much more recent provenance. The Dangerous Wild Animals Act of 1976 brought in mandatory licensing of big cats, which lead to some owners releasing their animals into the wild. E.g. Felicity, a tamed puma who lived out her days at Highland Wildlife Park, was captured in Inverness in 1980, and it is alleged that circus trainer Mary Chipperfield released three pumas onto Dartmoor after her zoo closed in 1978.

Still more likely is that many sightings are actually of large pet cats, like the maine coon which can grow to over four foot long. Even true big cats aren't out of the question though; the Born Free Foundation found that there are still almost 300 being kept as domestic pets in the UK. 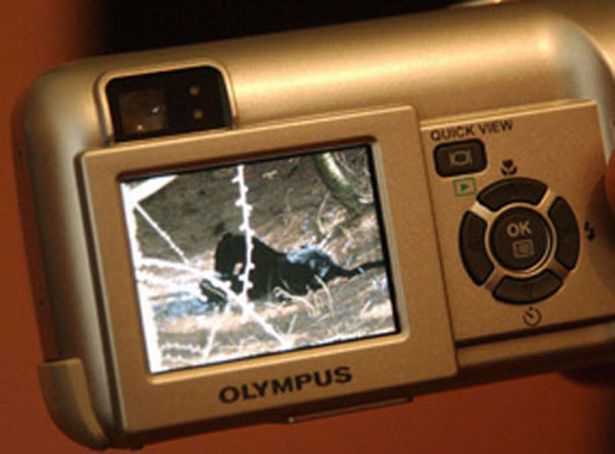 Cwmbran had its own big cat sighting in 2005. It turned out to be a large soft toy...

The chupacabra - literal Spanish for 'goatsucker' - burst into the public consciousness in the mid 1990s. It was a term given to the creature responsible for livestock deaths across Puerto Rico, the farm animals being killed and drained of blood through small puncture wounds. Eyewitnesses described the chupacabra as reptilian, with greenish/grey skin and spines all down its back. It stands about three foot high and is said to hop like a kangaroo! Others claim it looks more like a wild hairless dog, with pronounced fangs and claws.

Over the years sightings of the chupacabra have been reported across southern America, the USA, and even as far afield as Manipur in India. For the most part the idea is ridiculed by mainstream science, with the most common explanation being mangy dogs and coyotes feeding on easy prey, like pets and livestock. The original sighting by Madelyne Tolentino is said to be based on a creature from 1995 sci-fi horror Species. Either way, the cases broadly fit with other livestock mutilation around the globe so who knows? Maybe the chupacabra are really those cow abducting aliens... 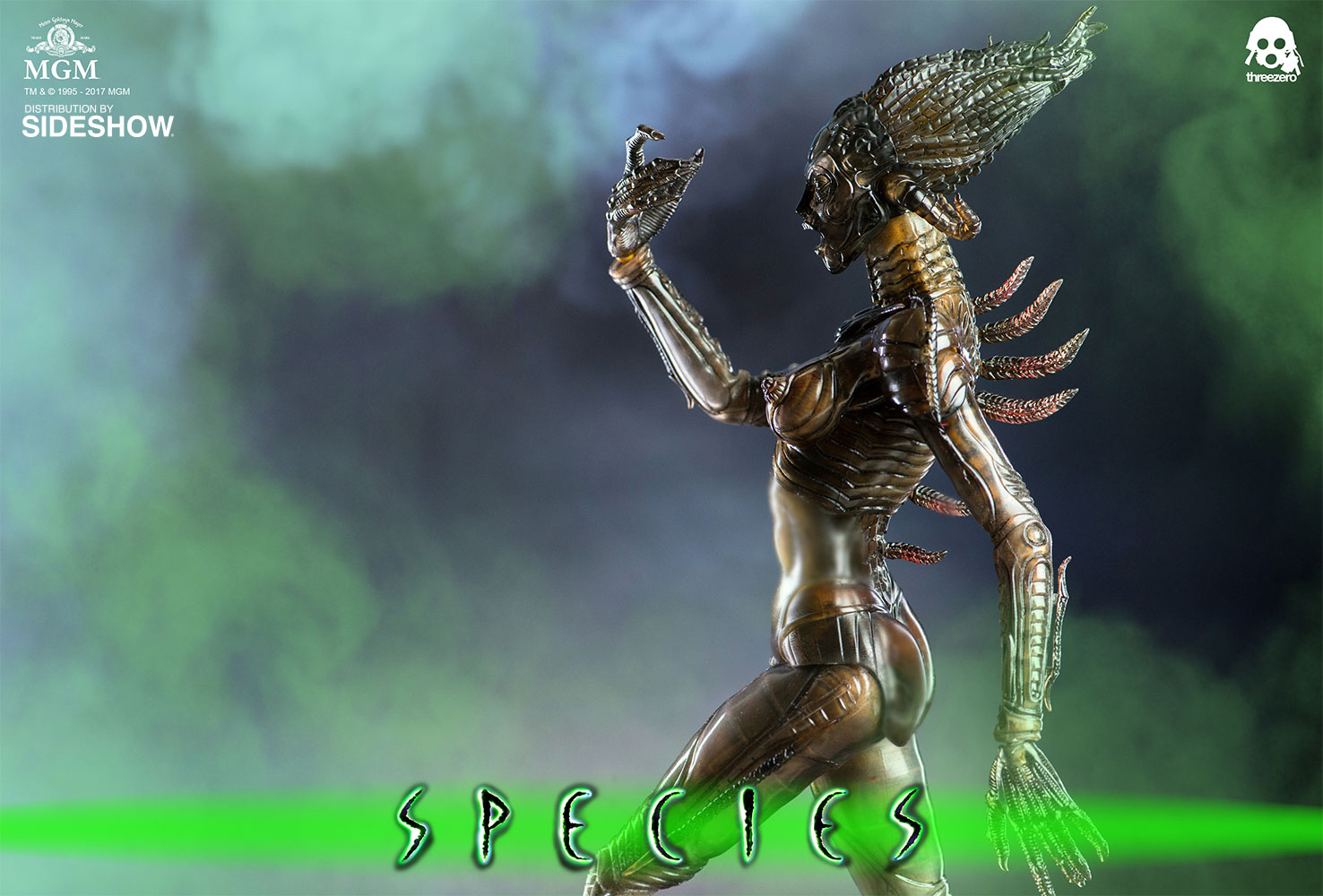 We've all heard of Bigfoot, the large apeman who is said to roam rural Canada and North America, but I'd wager that way fewer people know about his Australian equivalent, the yowie. Sightings of the latter stretch back centuries, and today they continue to flood in, especially around the Gold Coast and the Blue Mountains. Check out Yowie Hunters for a comprehensive collection of newspaper reports and firsthand accounts.

The yowie, historically known by names including doolaga, jimbra, and jurrawarra, has some consistently described characteristics: it's hairy, walks on two legs, and is both strong and fast. But some say they're big and tall, like Star Wars' Chewbacca, whereas other eyewitnesses say they stand about three feet high. Their tracks are human, clawed, three toed, or, according to historical tradition, face backwards. Is there more than one type of yowie? Or are the discrepancies proof of its non-existence?

As I said in my earlier post on the subject, if early hominids had a stab at surviving under the radar anywhere, the deathtrap that is Australia would be the place. 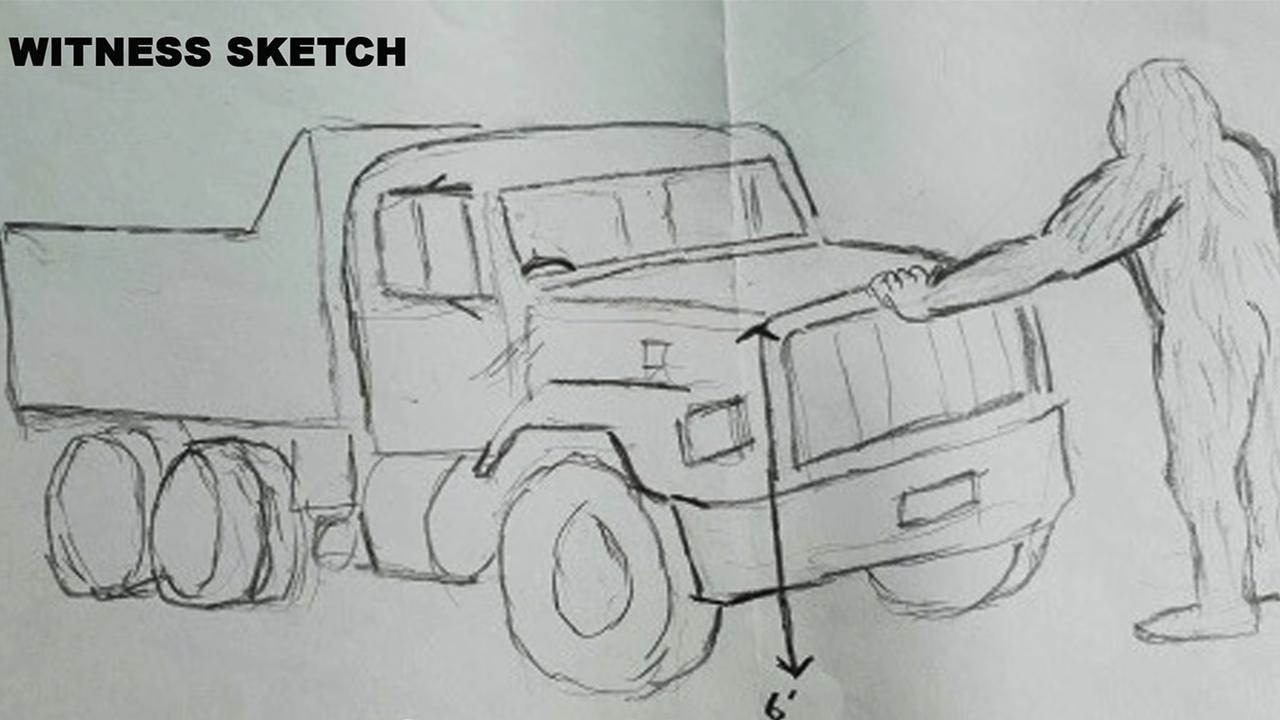 'Gary', a delivery driver from the Gold Coast, told newspapers he's been having nightmares since encountering a yowie which thumped on the bonnet of his truck in November 2018.

As a kid I loved dinosaurs - and not just the Disney show - so I was 100% convinced that Nessie was the last survivor of a once vibrant plesiosaur population. It didn't matter what science said, or how thoroughly that famous 1934 photograph was debunked. I wanted to believe.

Today, sadly, I'm a whole lot more sceptical. But I'm also more aware of the huge number of Nessie rivals around the world. The USA and Canada have a whole collection of lake monsters, from Chessie to Bessie, while Japan has Issie and Kussie. Norway has Selma the Sea Serpent, and the Republic of Congo has the Mokele-mbembe. Scotland alone has had sightings of monsters in over a dozen different lochs, suggesting that a) bodies of water produce similar optical effects, or b) there are plesiosaurs everywhere! 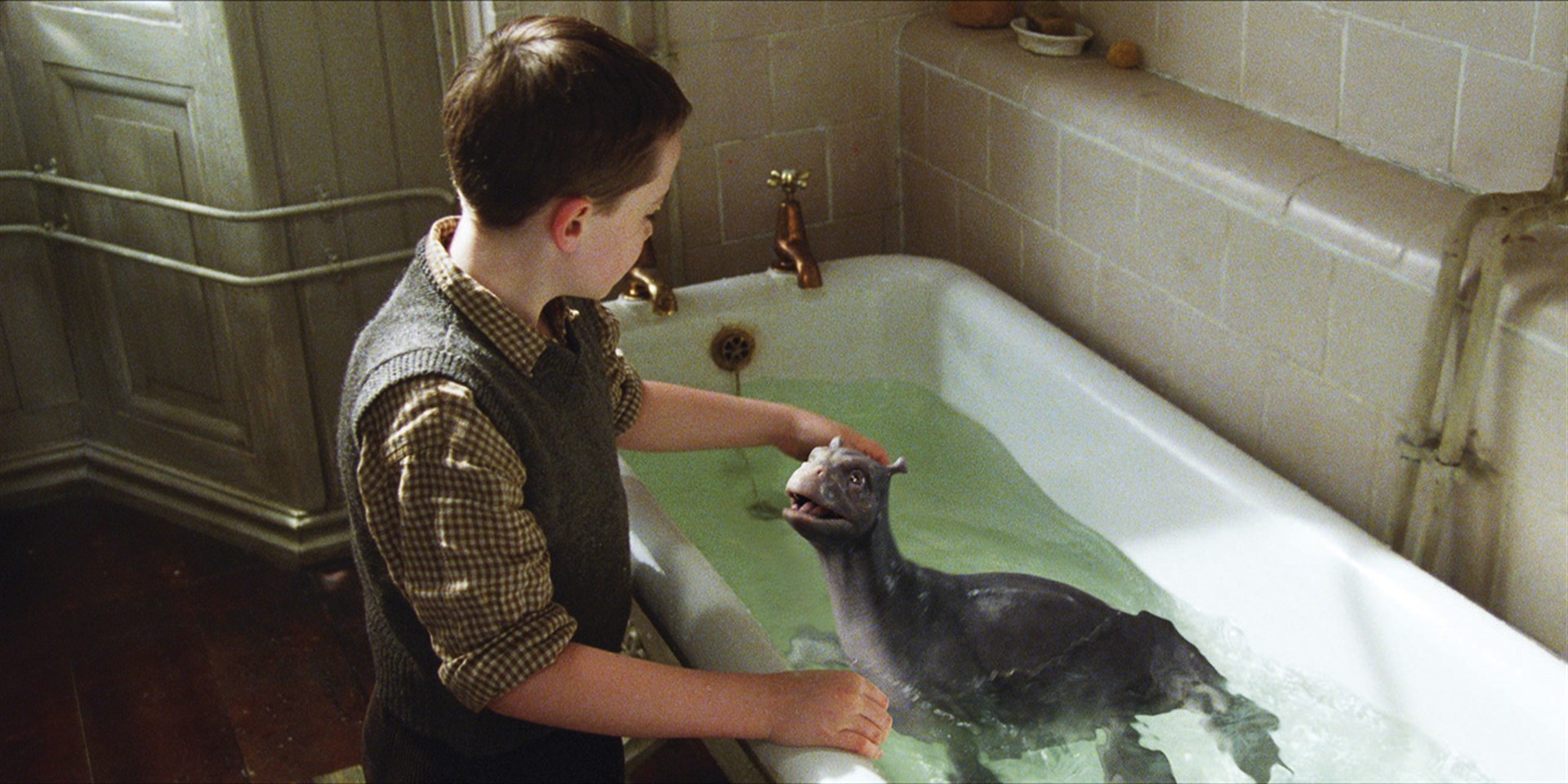 Lake monsters are sometimes linked to the water horse, aka the kelpies of Scotland and the Welsh Ceffyl Dŵr.

Today the cryptid of choice is unquestionably the unicorn - manufacturers seem convinced that there is nothing which won't sell better emblazoned with one. I'm an 80's baby and still prefer the mermaid; Ariel and Daryl Hannah did their jobs well!

Supposedly half-human / half-fish, the mermaid dates back to at least 1600 BC, based on Mesopotamian artwork and Assyrian legends. Cultures all around the world have a folkloric tradition of mermaids of one type or another. Some are the beautiful women with pretty tails we like to think of today. Others, like the ningyo of Japan, are literally a fish with a human face. Hmmm.

What really resparked my interest were the so-called fiji mermaids - fake composites made up of various animal corpses. What better way is there to combine folklore, media history, and the creepy and macabre than this thing?? 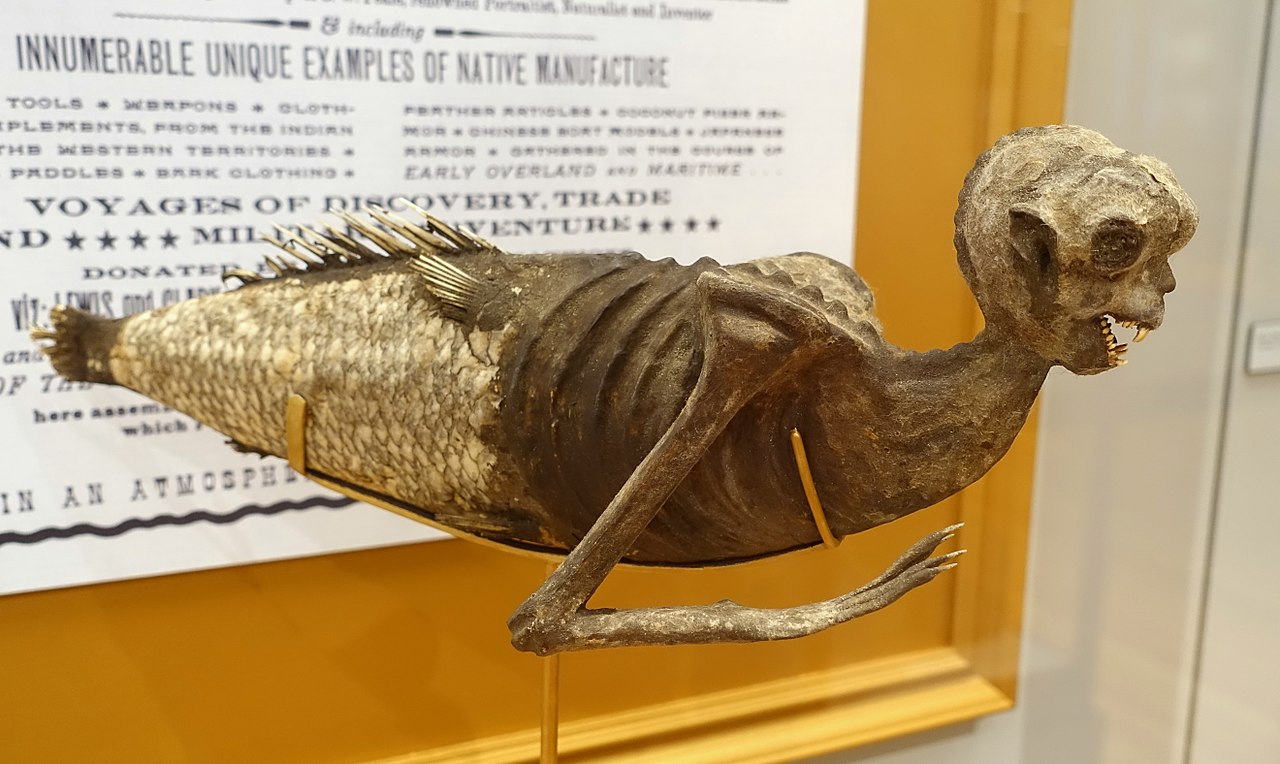