Women in the Workplace 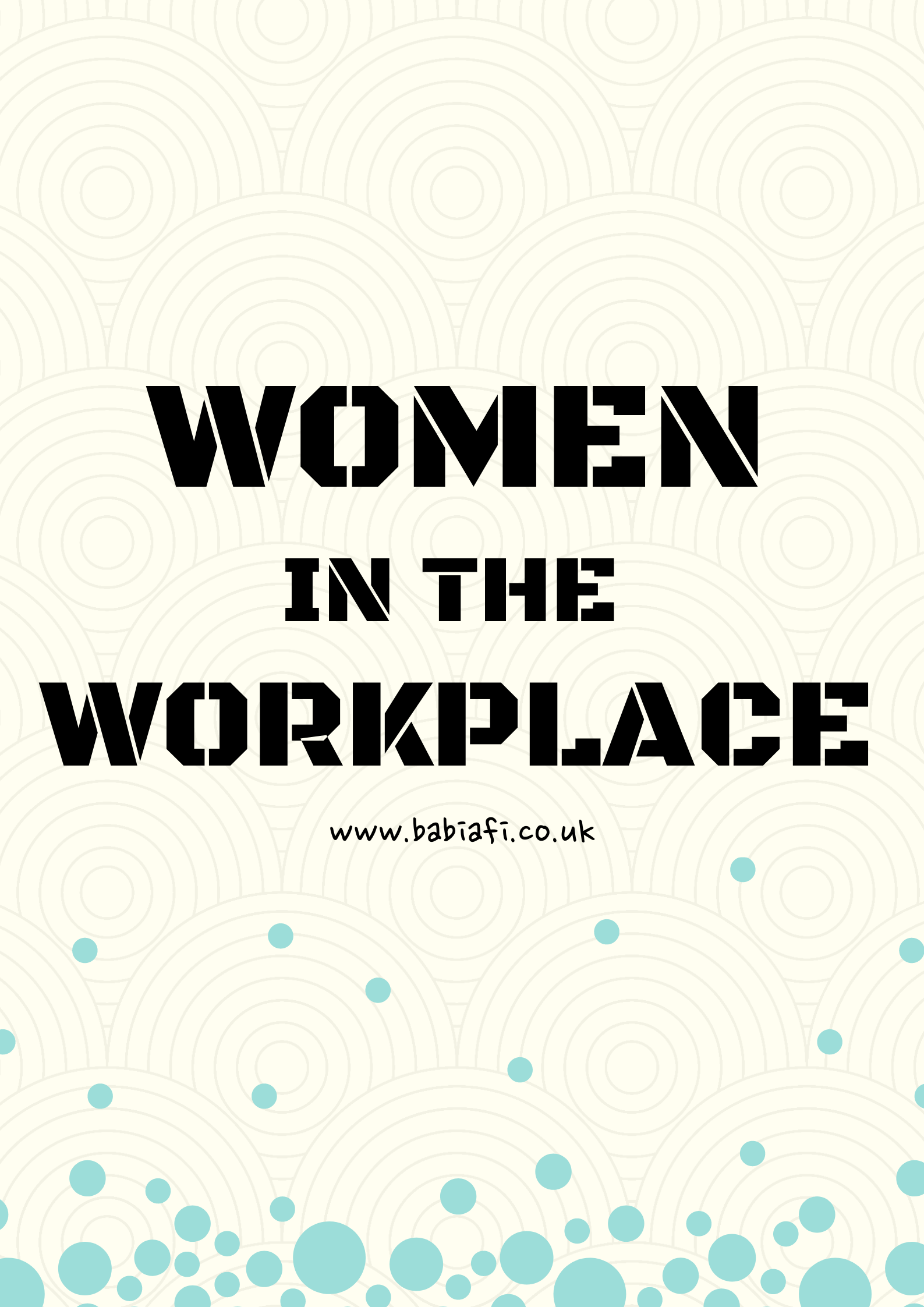 There was a story about 'tradwives' on the BBC last week which was, well, everything you'd expect it to be - the woman being interviewed said she was for femininity not feminism because she loved to submit to her husband like it was 1959. To each their own, and all that jazz.

The thing that bugged me about the narrative was this supposed truism that women in 1959 spent all day at home cleaning, baking cakes, and having their hair done to look nice for hubby. The truth is that, for working class women, the idea that you'd go from cradle to grave without ever bringing a wage in has always been so much rot. Your choices were curtailed. You certainly wouldn't be earning as much as male colleagues doing the exact same job as you, just by virtue of their having a different chromosome. But economic necessity meant paid employment was a fact of life for huge numbers of women, single or otherwise.

Even back in Victorian times, when the 'separate spheres' philosophy really embedded, plenty of wives and mothers went out to work. Many more took work in: washing, ironing, needlework, all manner of piecework. Women put in long hours - between the usual cooking, cleaning, and other duties - for absolute pittance. In 1906 you could expect to make little more than a penny an hour (equivalent to around £1.20 today, in terms of purchasing power) on piecework, while a woman working full time in a factory could expect to make between 11s 3d and 18s 8d a week... Compared to 25s 9d for a man. 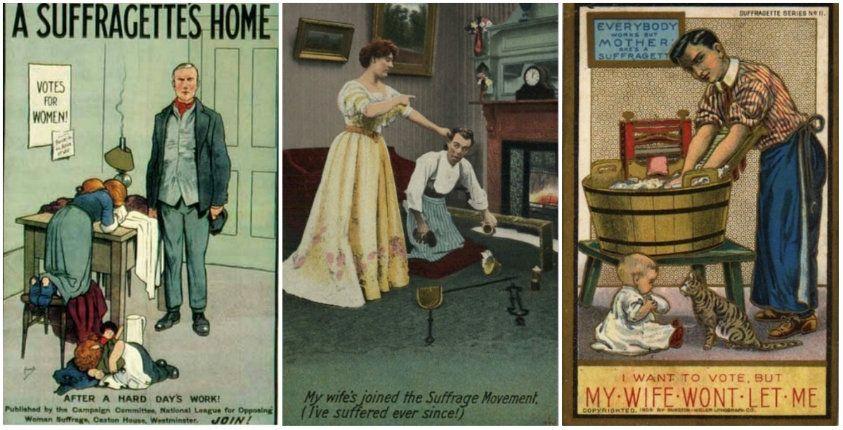 Anti-Suffragette propaganda reveals the real worries of men - not that it will impact positively on women's lives, but that it might impact negatively on theirs.

By the 1950s, with the memory of women's ability to keep the home fires burning and perform pretty much every job the guys away at war could do, there was a real push for greater rights. In 1955 a limited number of women fit the criteria for equal pay progress in the non-industrial civil service, designed to bring pay parity to women doing 'equal work' by 1962, and other organisations began to consider the move. Even so, there were not many industries paying equal wages when the Equal Pay Act was passed in 1970 - nor when it was actually implemented in 1976.

The ideal in the magazines and on the telly was for the angel of the home; the wife and mother whose husband made enough money to support her. Unemployment figures didn't even count women. Women couldn't open a bank account, or have a mortgage, or even buy a vacuum cleaner on hire purchase - everything needed a man's signature and guarantee that repayments would be made. The marriage bar kept married women (or married mothers, at any rate) out of the better paid middle class professions. But millions of women went out to work, just the same. Millions continued to bring work home. Either way they were still expected to cook, clean, take care of the kids, etc, because the double burden was just as real in 1959 as it had been in 1906.

(I suspect both men and women alike viewed a lot of that paid employment as scarcely constituting 'real work'. Cooking, cleaning, childcare, laundry, needlework, taking notes and answering the telephone... What does it matter where women's work is done?)

I did some quick number crunching with population figures and the stat that c. 8 million women were in work in 1961 to tweet about the phenomenon:

#TradWife - the great thing about feminism is that it has given us (or at least some of us) the power to choose, even the pretty, idealised version of 1959. c. 38% of working age women were in paid employment of some kind in 1959.
— Jessica Powell (@jess__powell) January 17, 2020


To be honest I was too generous with my definitions of working age though. Here's a table of figures put together by Walsh and Wrigley: 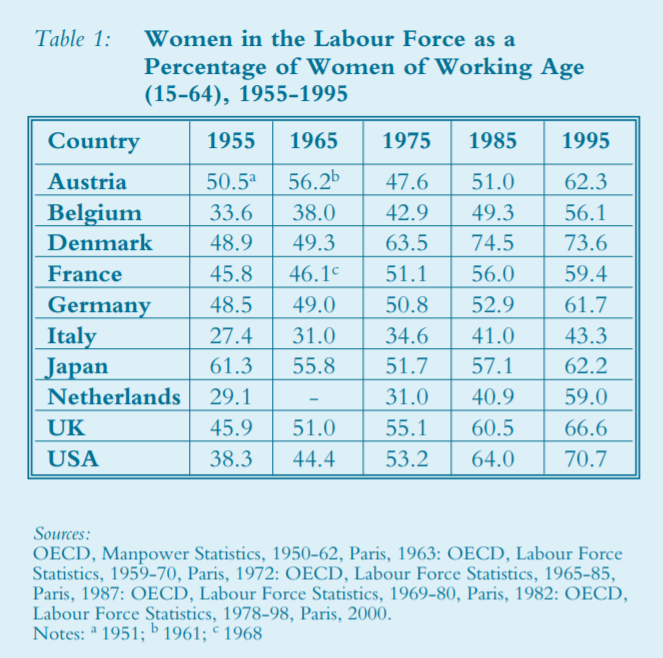 So about 50% of working age women were in paid employment in 1959. We do them all a disservice every time we ignore that.

Of course, some random bloke responded to my tweet with the statement 'there is nothing great about feminism.' I checked out his feed and the first tweet that came up told the world that there is nothing wrong with traditional gender roles. He's right, there isn't - provided you have the unquestioned choice not to conform to them. Because feminism hasn't prevented me from being a kept woman. In all likelihood I never would have been. What it has done is ensure that I get paid the same wage as the men I work alongside.

(In addition to giving me the education and the freedom to argue the point on the internet, under my own name no less!)

And, as far as I'm concerned, that's priceless.


I leave you with the world's first ticketed movie, 'Exiting the Factory', shot by the Lumière brothers in 1895 and showcasing plenty of women workers: