PRESS
January, early morning
Abertillery
A 'reddish' object that looked like a flying saucer was seen in the sky, moving quite high above the mountain. After a minute or two it changed into 'something like a space ship'. 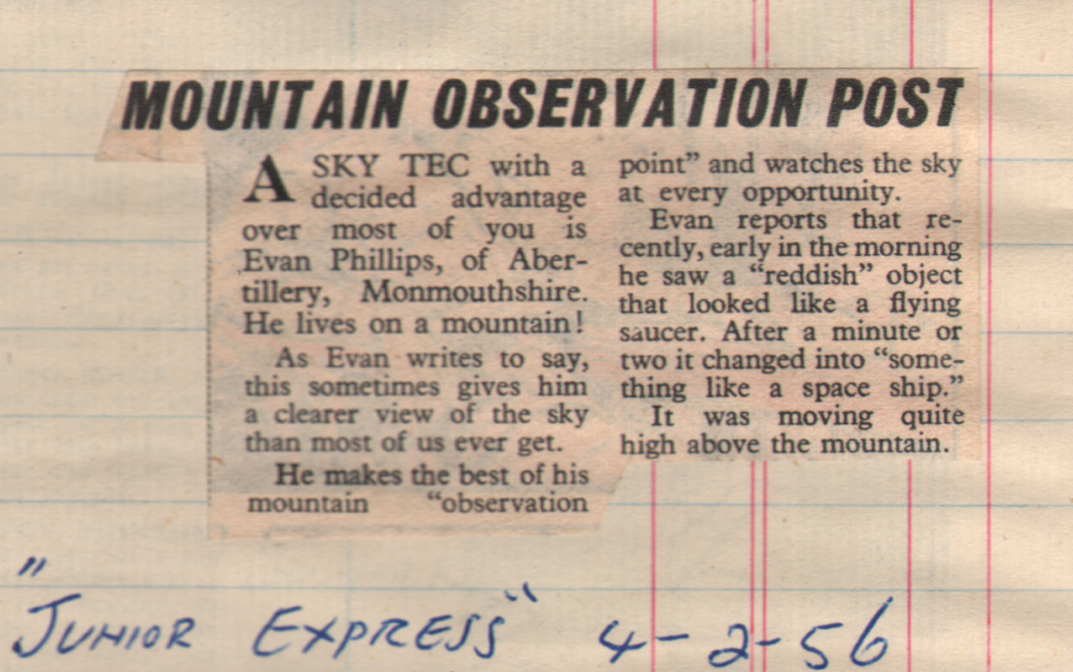 PRESS
February
Prestatyn
Various objects seen, including a half moon shaped object which moved with 'fantastic acceleration' after hovering for a few minutes. A silver light surrounded by a blue flame. A long beam of light. And three straight luminous thin objects.

After a flying saucer was reported to RAF Brawdy as hovering over the Haverfordwest area, possibly connected with disruption to TV signals, one of the air traffic controllers confirmed they had sigthed a UFO - along with a pilot returning from an exercise. Captain Brown went up in a jet fighter to investigate. He saw the object and assumed it had to be a research balloon, but an amateur astronomer took a photo of it and maintained it was not a balloon. It was later seen over Swansea, etc, throughout the evening.

Dusk. A school teacher phoned the Brawdy Air base to report that she could see a 'flying saucer' cruising over the West Wales coastline. The Commander of the Royal Navy Air Service station, Captain Eric 'Winkle' Brown, in his memoir 'Wings on My Sleeve' (1961), said his first reaction was to laugh. However, he checked the report with a pilot returning from an exercise who told him 'Yes, and I can damn well see it too.' Then one of the air traffic controllers reported that the object was visible from the control tower.

It was reported that it was hovering over the Haverfordwest area. And from 5 pm all the TVs in the area went black for about half an hour, for no apparent reason.

Brown decided he had to see it for himself and took off in a deHavilland Vampire jet fighter at 5.10 pm. Climbing to 35,000 feet, he could see the circular object still high above him in the darkening sky. Although visibility was good, Brown gave up the pursuit and returned to base.

'Flying Saucer Chase! Unidentified metallic object in the sky, sighted from ground. Scrambled in perplexing chase after some iridescent shape at very high altitude, which was probably a cosmic research balloon. What else?'

Later that night other reports flooded in to newspaper offices throughout the region. Brown received a call from an amateur astronomer who had taken a photo of the object and who maintained that it was not a balloon. It was reported to be moving slowly eastwards.

In 2011, Brown told researcher Dr. David Clarke that the phone call led him to reject the only theory he had, that it was a research balloon.

It was spotted hovering over the Swansea and Neath area on the same evening - various descriptions and colours were forthcoming - blue, red, silver, yellow. Many theorised that it was a meteorological balloon. One caller from St. Thomas, said that it seemed to be over this area but moving towards Bonymaen and was a 'ball of fire'. He said he had been watching it for over an hour, sometimes with the aid of a special photographic lens, 'It is yellow now; it was silvery white some time ago,' he said.

Brown died in February 2016, just over 60 years since his encounter in the skies of West Wales.

Cylindrical UFO seen hovering above houses, at an altitude of less than 200 feet. It was bronze in colour and the sun reflected off five small ridges which ran around it.

During the summer holidays of 1956, eight-year-old Mike Trew had recently moved to the newly-built Cathan Crescent, in Portmead, and, together with about ten other children were exploring the area along Broughton Avenue into the adjacent Blaen-Y-Maes estate, which was under construction. They had crossed the little stream (which is still visible in some places) and stopped by where an electricity sub-station was going to be installed, more or less opposite the turning to Blaen-Y-Maes Drive, near where the shops now are. The children were aged from 7 to 10 years old.

Looking back towards Cathan Crescent, a distance of less than a quarter of a mile, he noticed a long cylinder with a length of about four times its diameter which appeared to be hovering above the houses at an altitude of less than 200 feet. it looked just like two 45-gallon oil drums joined together end-to-end and inclined at an angle of around 20 degrees to the horizontal with its long axis aligned NE/SW.

The object seemed to be of metallic construction, was bronze in colour and the sun reflected off five small ridges which ran around it. There were no other visible external features. It made no noise. The 'ridges' seemed to be angular in profile, very much like a hexagon cut in half, with flat top and flat, angled sides, hence the reflection of the sun. The object was in a position approximately to the SSW, with the afternoon sun just starting to shine onto the side facing him. Mike drew the attention of an older boy to the object, who quickly guessed it must be a balloon. Although young, Mike had a good understanding of science and was not convinced with this explanation for a number of reasons which he gave:

1. There was no visible tether.
2. It was not shaped like a balloon.
3. It looked metal.
4. It was very big, possibly 30-40 feet long.
5. It's position and inclination did not change over the time he kept watching it, certainly over 30 minutes, though a gentle breeze was blowing.
6. If it was a balloon, who would have access to hydrogen or helium? At that time, only mothers were at home with all the men at work and all the kids in the group. In any case, about 75% of all the houses were unfinished and unoccupied.
7. It was never seen again.

Mike said: "Being young I became engrossed in the games we were playing but on the way home I looked out for the object again but it was no longer there."

In later life, Mike became a school teacher and taught physics at secondary school level. He is now 70 and has always wanted to share his experience with others.