I briefly mentioned this UFO sighting as part of my post on The Broad Haven Triangle. Central to that story was the sighting of a UFO on the ground and in flight from the yard of Broad Haven Community Primary School. Although it was the one which captured the public imagination - and the press attention - it wasn't the only school sighting to take place in Wales during the February of 1977.
The Rhosybol UFO, like that at Broad Haven, is notable for its multiple witnesses and the similarity of the individually crafted drawings. 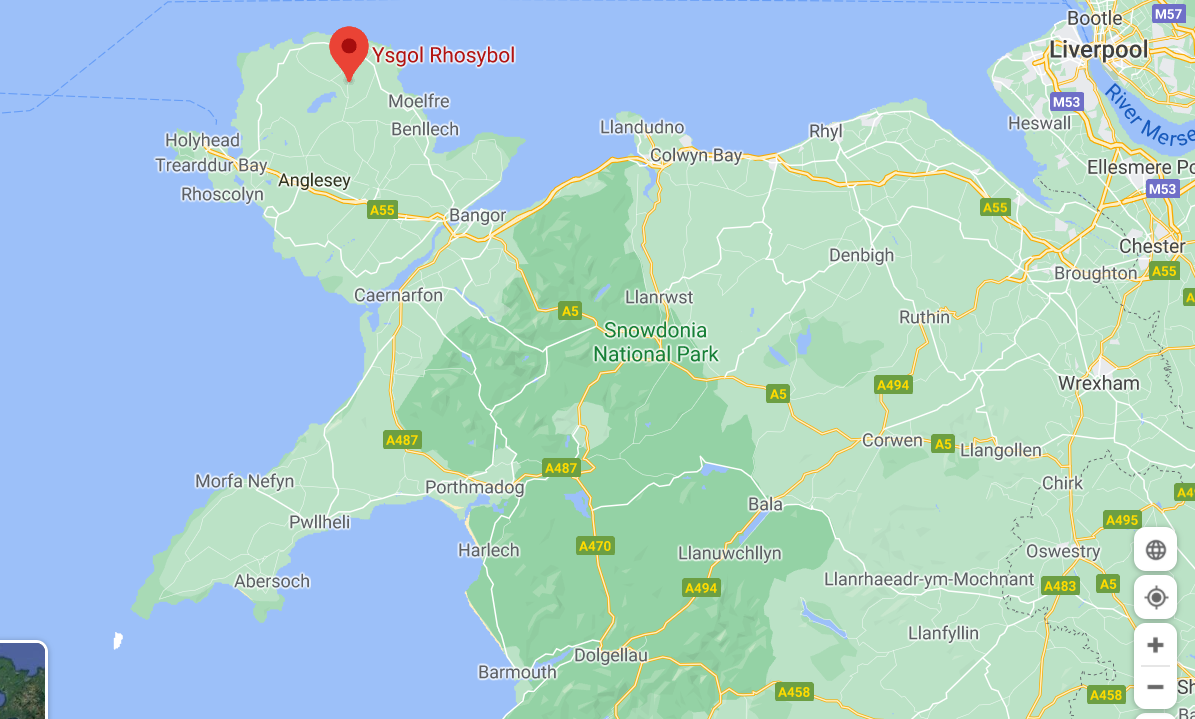 On the afternoon of Wednesday February 16th, 1977, nine girls aged between 8 - 11 and their teacher were outside playing netball at Ysgol Rhosybol on Anglesey. Gwawr Jones, aged 10, was looking up at the net when she spotted something strange and shiny high in the sky. She shouted to the others to look and the group stood watching it for a few minutes.
The object was described as having a black dome on top and a silver cigar-shaped base. It was a bright afternoon and they were able to watch it flying in a northerly direction, towards Bull Bay. It went behind the only cloud in the sky then reappeared again for about a minute before disappearing for good.
Gwawr Jones said in 2009: "It's hard to describe what I saw. I was only a child, of course. I can remember seeing something shining in the sky. It moved quickly across the sky. We must have seen something unusual. What exactly? I don't know. It's nice to think extraterrestrials came to watch us play netball!"
Mair Williams, the girls' teacher said: "Everyone turned to look. The children saw it first. It was a circular shape, topped by a black dome. The bottom was a very bright silver colour. ... I remember the silence. It didn't make a noise at all. It didn't leave a vapour trail. Its speed was amazing. I've never seen anything in this little world of ours moving at that speed."

After the sighting the girls went back into school and Mair Williams gave them each a piece of paper and a pencil, telling them to draw a picture of what they had seen without conferring with each other. As she told the Western Mail at the time: "I took the children back into school separated them and then told them to draw what they had seen. It was really astonishing – their drawings were all similar. I never believed in these things until I saw this!" Some of the drawings were printed in the May/June 1977 edition of the BUFORA (British UFO Research Association) journal:

The headmaster and Mrs Williams checked with RAF Valley at Holyhead to see if perhaps they were responsible for the strange sighting. The base provided a covering note stating we "can offer no positive explanation or identification" before the drawings and a letter written by Gwawr were forwarded on to the MOD. Back at school the girls made a larger piece of art based on the object they had seen.
They were photographed with this model for the local press - a picture that S4C would attempt to recreate in 2009 as part of their Lle Aeth Pawb? (Where Are They Now?) documentary series. 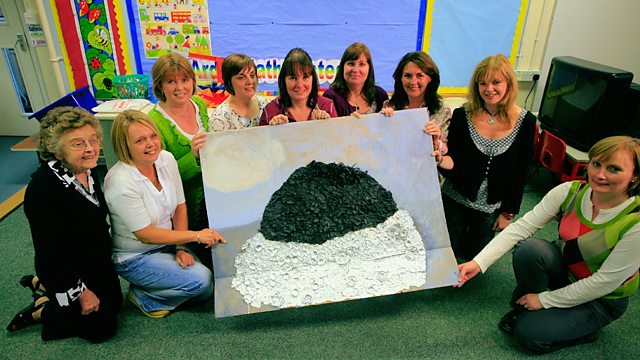 Gwawr Jones - by then using her married name of Bell and running the Pili Palas Nature World in Menai Bridge with her husband and two kids - helped track down her old teacher, Mair Williams, and seven of her fellow schoolgirls. They then recreated the infamous artwork before posing for a picture at Rhosybol Community Primary School.
I couldn't find a video of the show online, but there is a transcript of the translated English subtitles at Subsaga. They failed to track down Nia but the rest of the witnesses (Gwawr, Mair, Caren, Catherine, Iona, Bryona, and sisters Nicola and Nina) still lived on Anglesey, bar Rhian Price who flew in from her job as an English teacher at an international school in Egypt. Rhian said: "I remember how fast it travelled. It disappeared quickly too, it was odd."
Catherine added: "I remember it well. I'm totally convinced that, on looking back, I believe we saw something."
Nina, then a prison officer at Holyhead prison, commented: "My colleagues think I'm bonkers because I still believe in it!"
Gwawr also did an interview with the Daily Post in April 2009 to help promote the S4C show:

"I remember that it was a cold winter’s day, and that the sky was clear. We were having a netball lesson with our teacher Mrs Mair Williams on the school yard. I was looking up as I was shooting at goal when suddenly I saw something moving across the sky. We all saw it. We went back into school, and we all made a picture of what we had seen. We did them individually, and when we studied them we realised that they were all remarkably similar. The object travelling across the sky had a shiny base with a dark domed top. Later, we also made a model of what we saw.
Our headmaster contacted RAF Valley to check if there had been low flying aircraft in the area, but there hadn’t been. There was no explanation for what we saw. At the time there was a lot of interest in the sighting, both in the local and national press. TV cameras came to the school and I remember that our story was featured in the Daily Mirror. I didn’t worry about what I’d seen that day. But sometimes if there’s a nice clear evening sky, I’ll look up and wonder if there’s something out there. Back in 1977 we hadn’t heard of UFOs and had no preconceived idea of what a UFO would look like – I just drew a picture of what I had seen."

(The MOD files are held at the National Archives under DEFE 24/1206 but coronavirus has put them off limits. Govt, in its infinite wisdom, only released the UFO files in easily downloadable form from 1978 onwards...)