Welsh UFO sightings from 1981. For sightings from other years please click HERE.
PRESS
January
Aberffraw
Three school children - Michael Williams, Huw Hughes, and Kenneth Roberts - saw a UFO land on the sand dunes near Bwlan Farm. They told their headmaster, Mr Arwel Hughes, who put them in separate rooms and had them draw the object. They all drew an oval shaped object with a dome emitting flashing yellow lights.
The object made no noise, circled twice overhead, then made a vertical landing on the sands. They didn't see it rise again, and their view of the object was blocked by the dunes.
A RAF Valley spokesman said they had Hawk aircraft on a flying exercise, but Mr. Hughes told the North Wales Chronicle: "The boys are used to seeing Gnat and Hawk aircraft in the area, and I know of no reason why they should make up a story." 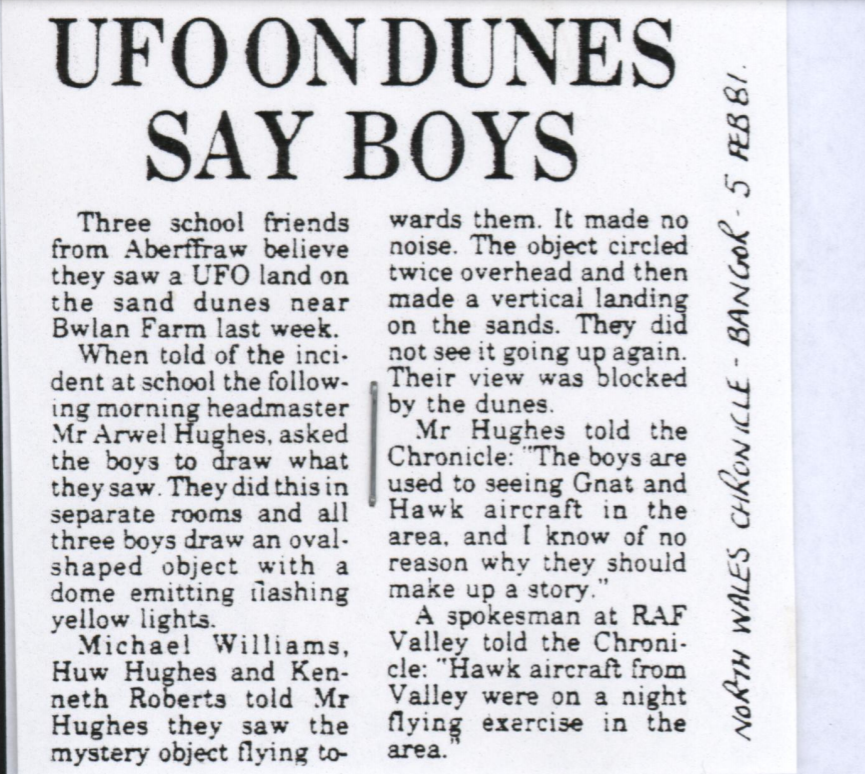 Numerous calls were made to police and the coastguard about orange, green and white lights in the sky. Cardiff airport dismissed them as aircraft landing lights, the Royal Observatory said it was probably a freak meteorite storm caused by the break-up of a satellite. 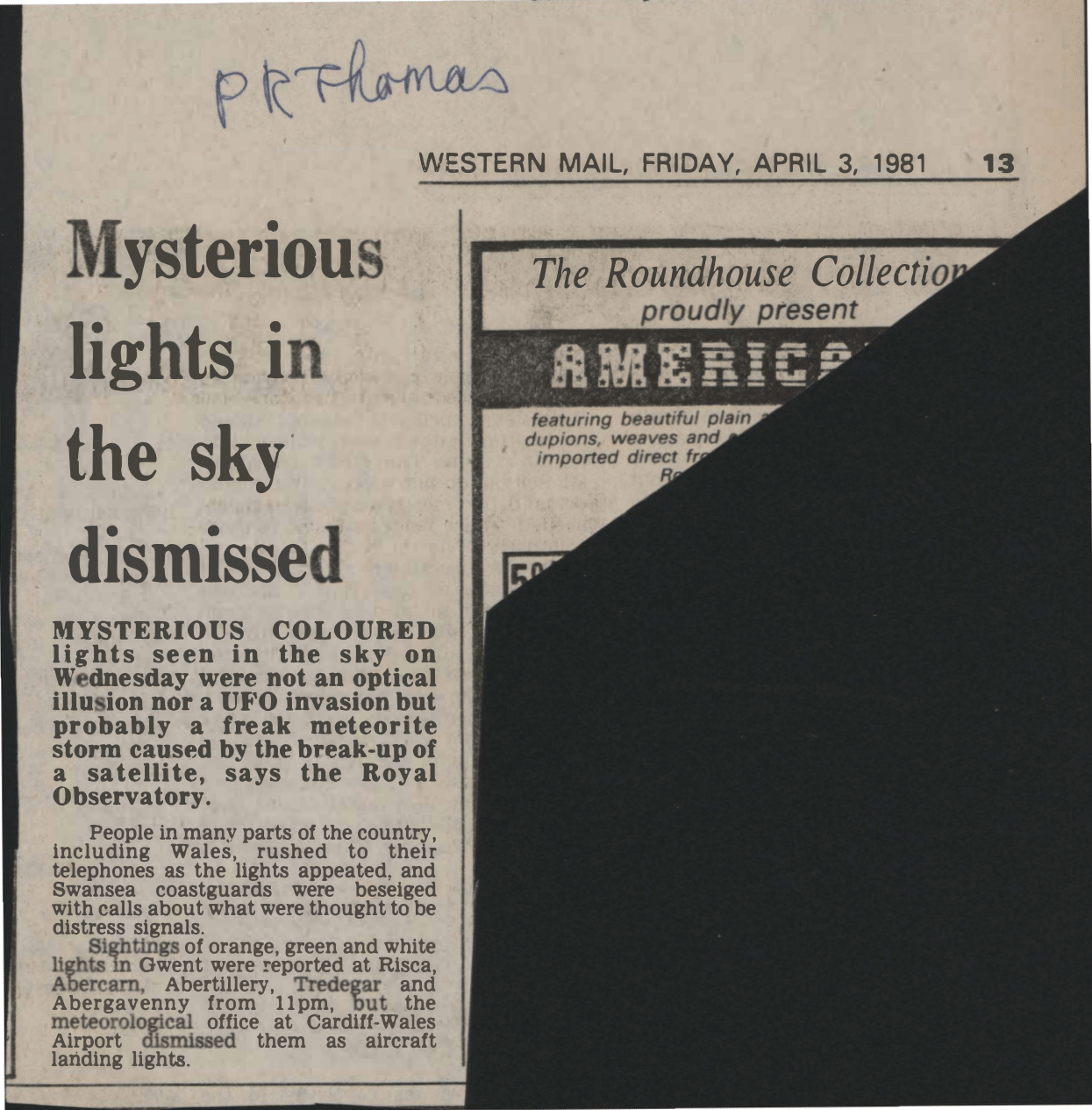 Clayton Blight (11), Ian Scommell (11) and Stephen Scommell (10) were playing cricket on Greenway Park in Rumney when they saw a "plane without wings". Two younger Scommell siblings, Jonathan (6) and Paul (4), were also present and saw "something" according to their mother, Sandra.
Clayton said:

It was completely black and it was really low-flying. It came over with a sort of whirring noise and we thought it was a jet - but then it turned in the sky and we still saw no wings. It came over the tops of the houses and over the college. It was going very, very fast.
We just looked at it and when we got back to the house we drew it and wrote about it. Later we reported it to the police. 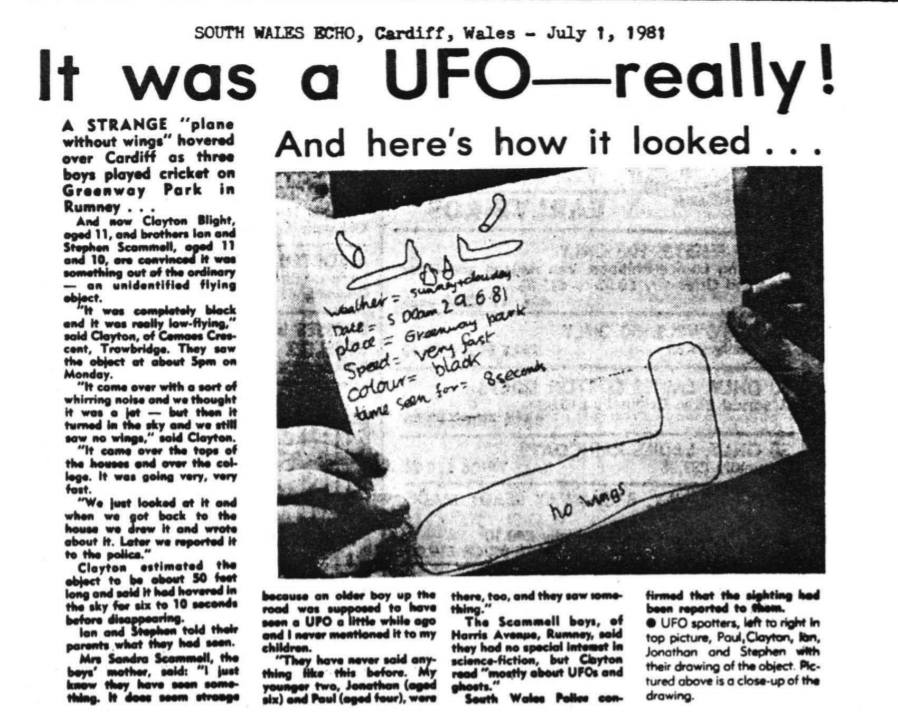 
Mr Raymond Davenport, of Yellow Cottages, The Rhiw, Oakdale, said he saw lights in the sky several times during the summer of 1981 .
"The last time was in November. I saw a blue light in the sky that didn't look like an aircraft or a firework. It rose vertically before disappearing."
Source: South Wales Argus, 16/04/1981.
SUFON
October, 19:45
Rogerstone

The witness, an 11-year-old boy, was with a group of adults and children in Risca and reported seeing two huge light-orange-coloured glowing balls moving down very quickly out of the sky in the direction of Rogerstone power station, about 2.5 miles distant to the south-east. The power station was a very visible landmark in the valley and was not difficult to see. There was no sound heard from the objects as they descended, one slightly ahead of the other. They hit the large cooling towers of the power station and the witnesses reportedly watched this for about ten minutes.

Witness: "...both objects sort of bounced off the side of the two large towers one after the other - there was no crash noise or any noise coming from the objects - then the objects shot up in the sky..... i can remember the shock reaction from the people that saw what happened."

The coal-fired Rogerstone power station was demolished in 1991.

Illustration courtesy of the witness: 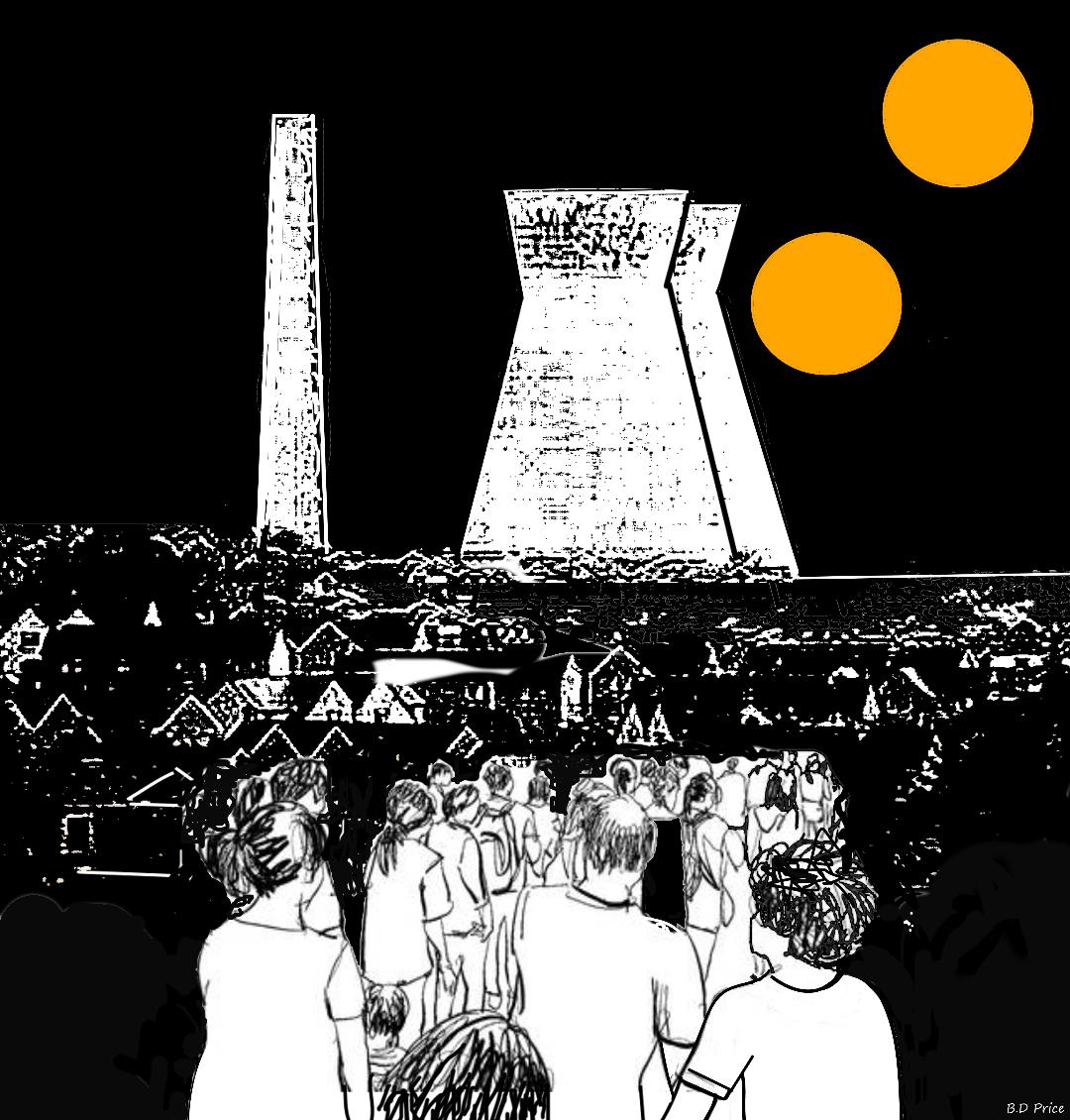 Night - clear. Mrs Mary Evans of Llwyd Road, Treboeth saw a 'bright fiery light' hovering behind old lodging house ruins on top of hill overlooking Llewellyn Park. She watched it for several minutes before it disappeared into the night sky.

'I thought the house was on fire because the light was so bright. It seemed very hot and I think must have left some form of scorch marks on the ground,' she said.

Swansea Coastguards explained it away as meteorites. Neither Swansea Police nor the airport had received any reports. Mrs Evans's neighbour also saw the object. 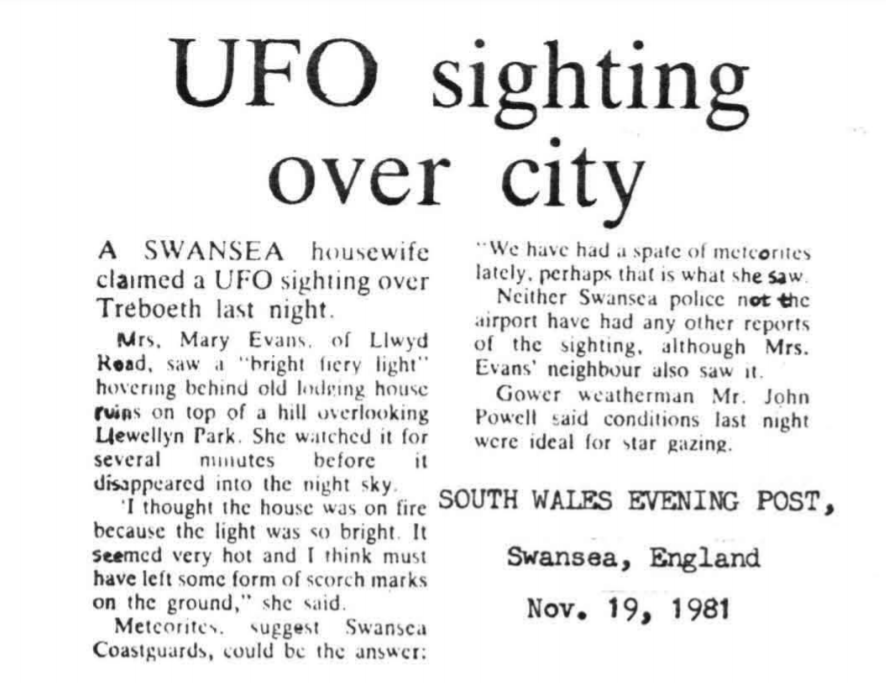 11 or 12-year-old Adrian was outside his house at 41 Arennig Road, Penlan, Swansea with two friends. Something in the sky caught his eye and he looked up to see a 'gun-metal-coloured' disc-shaped object hovering directly overhead. It was no higher than about 200 feet in altitude and completely silent. The other two boys saw it too.

Adrian said he used to make model aircraft at the time, so he had a good idea what should be in the air and what shouldn't! He estimated that it was about 20 feet in diameter and had a smaller circle in the centre which was turning slowly. The smaller circle had a single, flat line across it like the head of a screw, which was going around.

There were lights on the object, but none of the witnesses could remember if they were solid or flashing. The boys ran off to call their parents to come to see it, but by the time they came back, the object had gone.

The boys did drawings of the object but Adrian no longer has his, but will hopefully produce a new one. He has since lost touch with his friends.

In the comments on a post about a sighting by Gavin Weston of a solid white light on 10/06/2013, Paul Defraine said: "We both lived in the same street Gavin. I saw one hovering over our street in 1981."