This much cited story of a strange fire coming from the sea originated with Maurice Jones, then rector of Dolgellau, in a letter dated 20th January 1694 to the antiquarian Edward Lhwyd (Floyd).

Lhwyd contributed various letters to Philosophical Transactions v18/208, the journal of the Royal Society, on topics of interest - including Jones' description of "a fiery exhalation [that] came from the sea and set fire to the hay with a blue weak flame. The fire, though easily extinguished, did not the least harm to any of the men who interposed their endeavour to save the hay, though they ventured (perceiving it different from common fire) not only close to it, but sometimes into it."

That quote is actually just part of a longer letter by Jones reprinted in the journal:

This letter contains no answer to your queries about the locusts, for I am wholly intent at present upon giving you the best account I can of a most dismal and prodigious accident at Harlech in this county, the beginning of these holidays.
It is of the unaccountable firing of sixteen ricks of hay, and two barns, whereof one was full of corn, the other of hay. I say unaccountable because it is evident they were not burned by common fire, but by a kindled exhalation, which was seen to come from the sea.
Of the duration whereof I cannot at present give you any certain account, but am satisfied it lasted at least a fortnight or three weeks; and annoyed the country as well by poisoning their grass as firing the hay, for the space of a mile, or thereabouts.
Such as have seen the fire, say it was a blue weak flame, easily extinguished, and that it did not the least harm to any of the men who interposed their endeavours to save the hay, though they ventured (perceiving it to be different from common fire) not only close to it, but sometimes into it.
All the damage sustained happened constantly in the night. I have enclosed a catalogue of such as I have received certain information of, and have nothing to add, but that there are three small tenements in the same neighbourhood (called Tydhim Sion Wyn) whereof the grass is so infected, that it absolutely kills all manner of cattle that feed upon it. The grass has been infectious there three years, but not thoroughly fatal 'till this last.
Pray send me with all convenient speed your friends' thoughts and your own, of the causes, and if possible, also the remedy of this surprising phenomenon, etc.
December 24th 1693. Richard Griffith of Lechwedh-du, Humphrey Owen of Garreg-wenn, and Richard Davydh of Erw-wen, each of these lost a rick of hay the 24th at night.
December 27th 1693. That night was burnt one rick of hay of John Philips of Ynys-Llanvihangel y Traethau, two ricks of hay of Griffith John Owen of Cefn-Trevor-bach, and Katherine William, widow, of Cefn-Trevor-fawr, lost two ricks.
December 29th 1693. That night Francis Evans of Glas-vryn had one rick burnt. Richard Davydh of Erw-wen, predict. had a barn full of hay of three bayles of buildings burnt down to the ground. 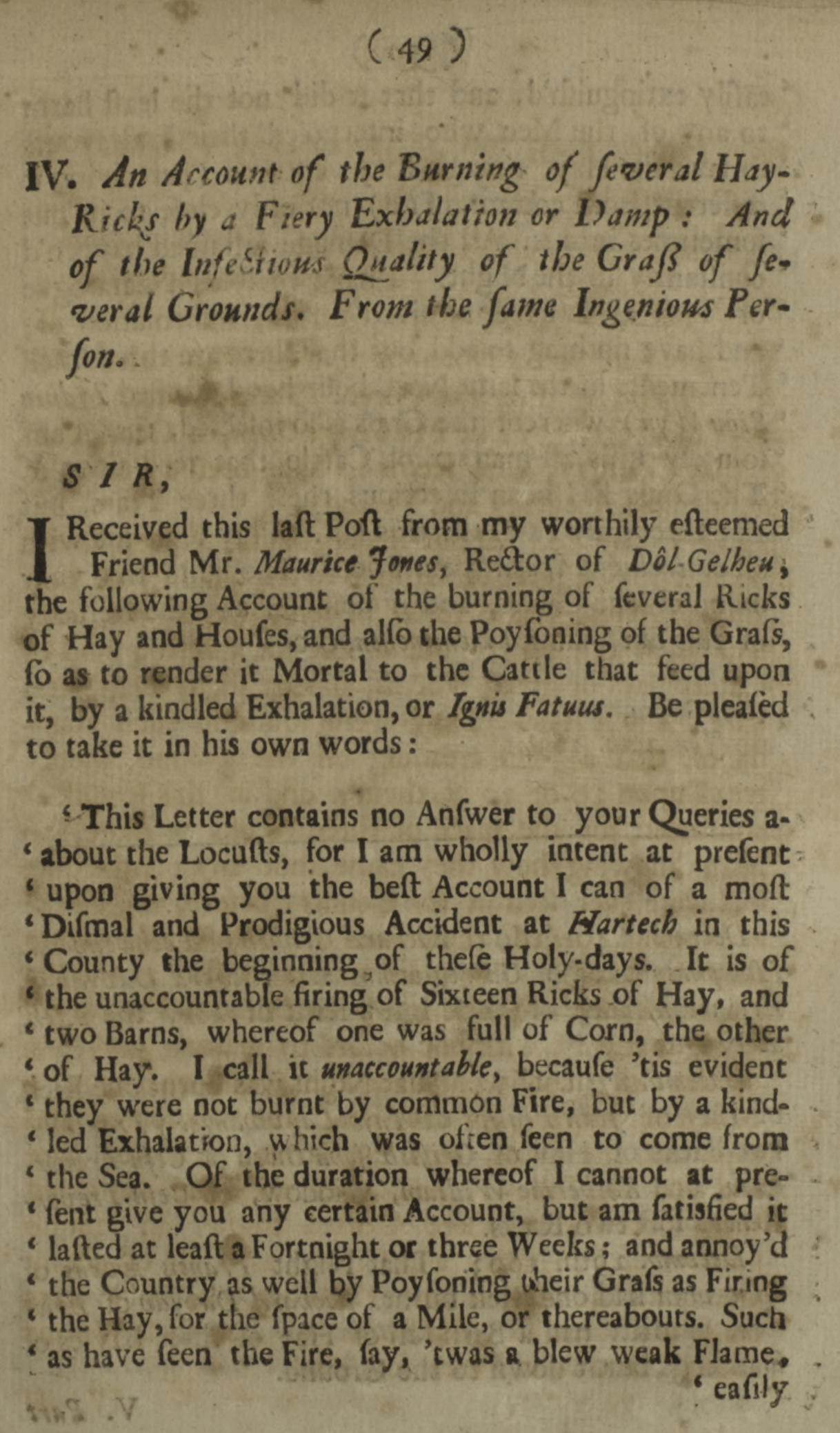 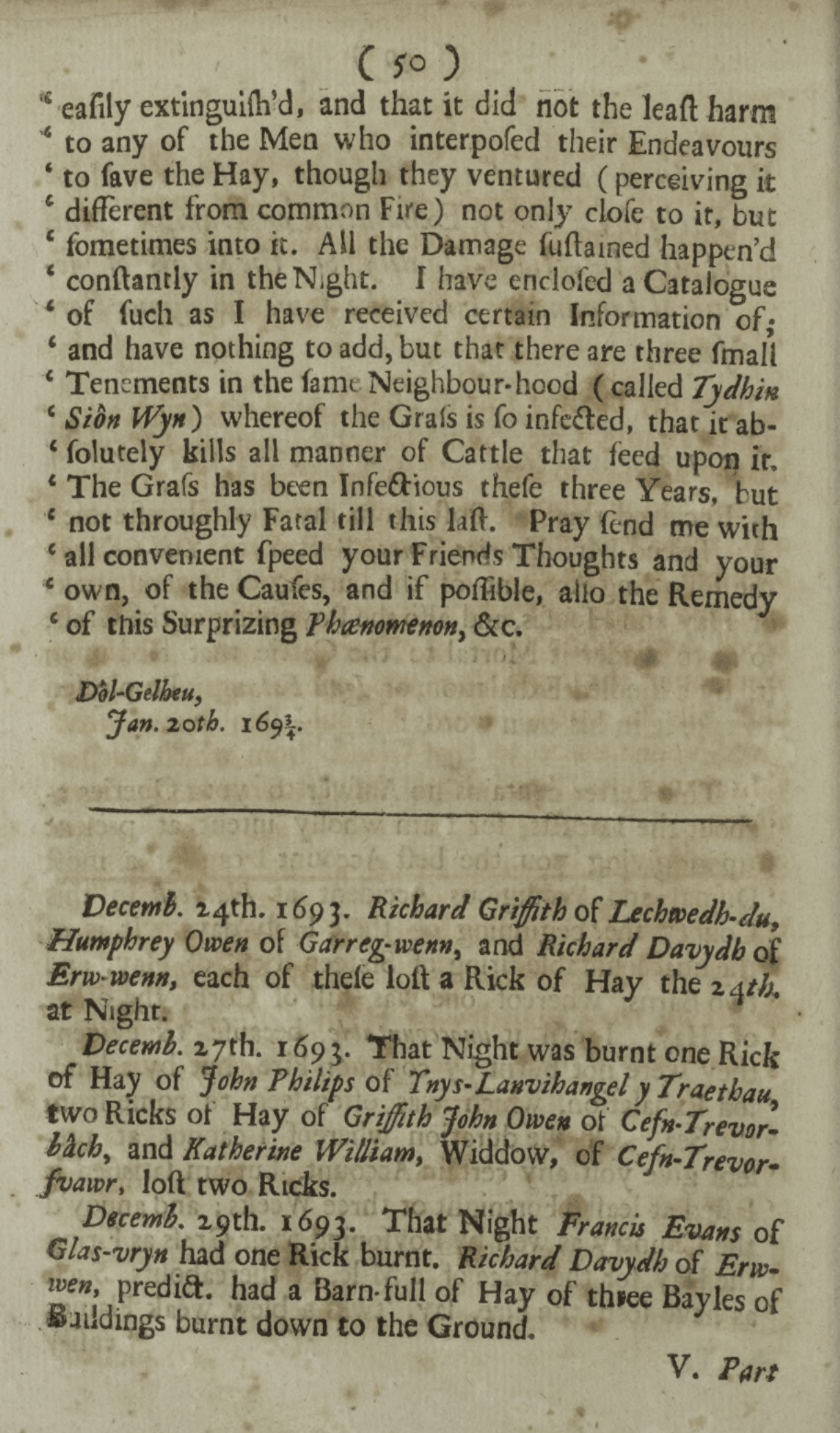 V18/#213 from October 1694 featured an update on the situation. Edward Lhywd wrote to Dr. Lister on August 23rd with all the latest information:

An intelligent person, who lives near Harlech in Merionethshire, assured me the fire still continues there; that it is observed to come from a place called Morva-bychan in Caernarvonshire, about 8 or 9 miles off, over part of the sea. That cattle of all sorts, as sheep, goats, hogs, cows and horses, still die apace; and that for certain, any great noise, as winding of horns, drums, etc. repels it from any house, or barn, or stacks of hay: on account of which remedy, they have had few or no losses in that kind since Christmas. That it happened during this summer, at least one night in a week, and that commonly either Saturday or Sunday; but that now of late it appears something oftner. The place whence it proceeds is both sandy and marshy. This is all I could gather from him. 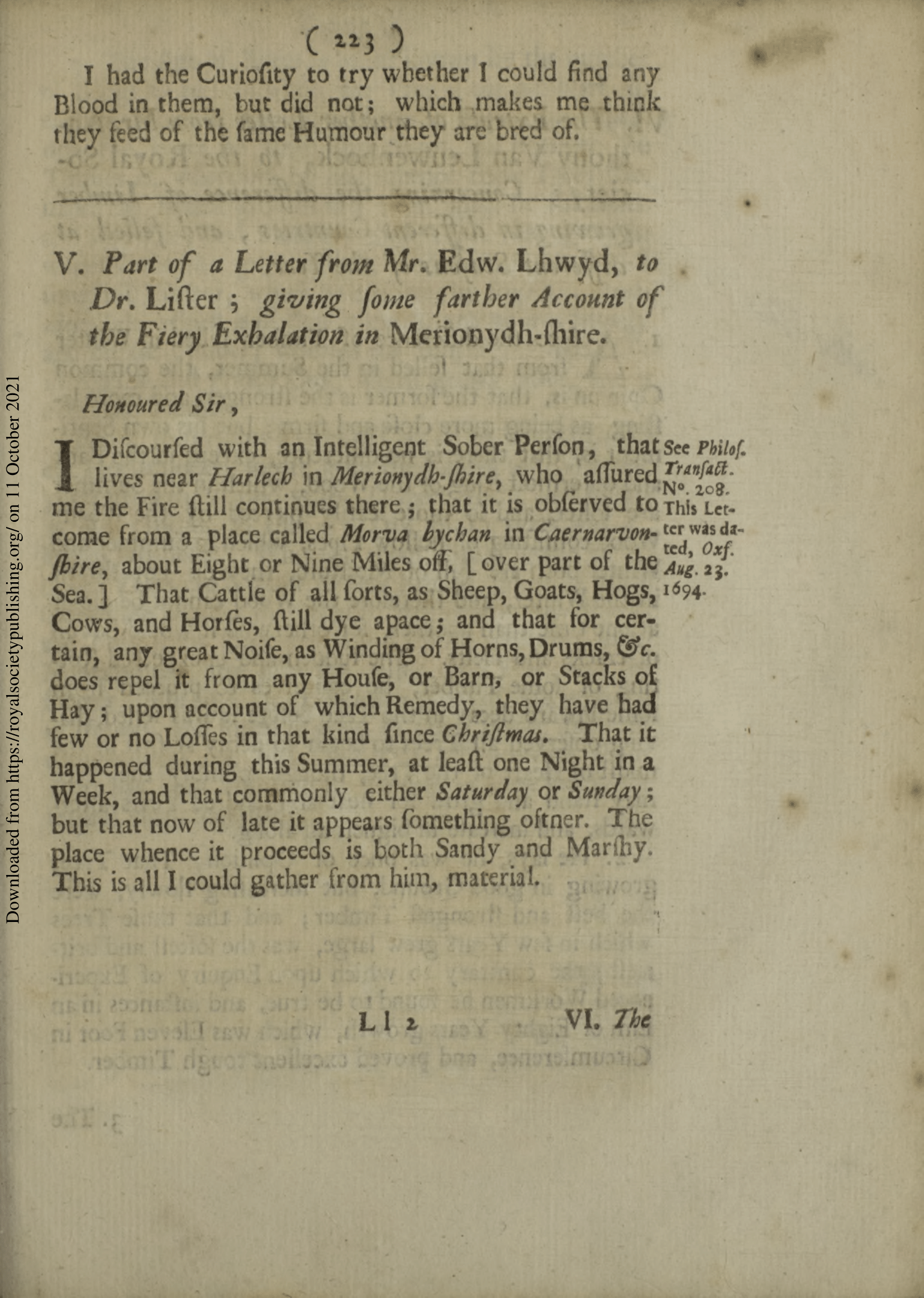 Thomas Pennant included an account of the so called 'Harlech Meteor' in his 1781 A Tour In Wales:

"Winter of 1694. — A pestilential vapour resembling a weak blue flame arose during a fortnight or three weeks out of a sandy, marshy tract called Morfa Byden, and crossed over a channel of 8 miles to Harlech. It set fire on that side to 16 ricks of hay and 2 barns, one filled with hay, the other with corn. It infected the grass in such a manner that cattle, etc., died, yet men eat of it with impunity. It was easily dispelled: any great noise, sounding of horns, discharging of guns, at once repelled it. Moved only by night, and appeared at times, but less frequently; after this it disappeared."

John Mason Neale also wrote about in his 1847 book The Unseen World:

"Of a less innocent kind was the celebrated Harlech meteor of 1694. Between Harlech and the Caernarvonshire side of the Traeth Bychan intervenes a low range of marsh land, running up some way into the country. Just before Christmas, 1693, a pale blue light was observed to come across the sea, apparently from the Caernarvonshire coast, and moving slowly from one part of the neighbouring country to another, to fire all the hay-ricks and some of the barns which it approached. It never appeared but at night.

At first the country people were terrified at it; at length, taking courage, they ventured boldly close to it, and sometimes into it, to save, if it might be, their hay. As summer came on, instead of appearing almost every night, its visits were confined to once or twice a week, and almost always on Saturday or Sunday. It now began to cease from firing ricks, but was hurtful in another manner; for it poisoned all the grass on which it rested, and a great mortality of cattle and sheep ensued.

At length it was traced to a place called Morvabychan, in Caernarvonshire, a sandy and marshy bay, about nine miles distant from Harlech. Storm or fine weather seemed to make no difference to this meteor; but any loud noise, as shouting, firing guns, blowing horns, appeared to prevent its doing mischief. It was seen for the last time in the August of 1694."