Charles Hinwood was found dead in the old Monmouthshire canal on Tuesday 19th December 1905 according to the Pontypool Messenger of December 23rd. The South Wales Evening Express of December 20th carried more or less the same report, with the extra detail that Charles had been about 40 years of age and unmarried.

The parish burial register for Llanfrechfa Upper revealed that Charles was actually 43 years old at the time of his death; he was buried on Saturday December 23rd 1905.

Charles had been born to Henry and Ellen Hinwood in Wiltshire and was baptised at Codford St Peter on March 15th 1863. By the time of 1881 census the family were living in Warminster, where they were still found - bar Charles - in 1891. Over the next few years they moved to Pontnewydd where the 1901 census found Charles working as a boatman and living with his parents and younger brother Henry, then a 25-year-old collier, on the High Street. It was probably Henry the younger who was charged with being drunk and disorderly on the highway in April 1899, and duly fined 7s and 6d at the Pontypool petty sessions.

Another of Charles' younger brothers, Sidney, was working as a colliery hauler and living at 3 Nightingale Row with his wife Mary Matilda and their two sons, Frederick (b. 11/06/1897) and Sidney (b. 18/10/1899). Kate was born in 1903 and another son, Charles, lived just two weeks before being buried on March 20th 1905 - in the same service as his paternal grandmother, Ellen Hinwood.

At some point between 1901 and 1905 Charles also began working at the colliery and moved in to 3 Nightingale Row with Sidney, Mary, and their family. It was the house on Nightingale Row he was walking back to when he lost his footing and fell in the canal. At the inquest held on Thursday 21st December 1905, presided over by Dr. D. J. Jones, the deputy coroner for South Monmouthshire, Sidney said that he had last seen Charles at 18:30 on the Monday evening. He appeared to be quite well and, Sidney pointed out, he had never shown any suicidal tendencies.

Frederick William, the landlord of the Bridge End Inn, testified that Charles had been quite sober when he left his pub at 22:00, but that it was very dark outside. Lewis Williams, a farmer, testified that he spotted the body at 11:00 on the Tuesday morning, and that the lock keeper brought it to the bank. P.C. Jones told the inquest that he had found no signs of violence on the body but pointed out that the water was around 4ft deep and Charles was just 5ft tall. 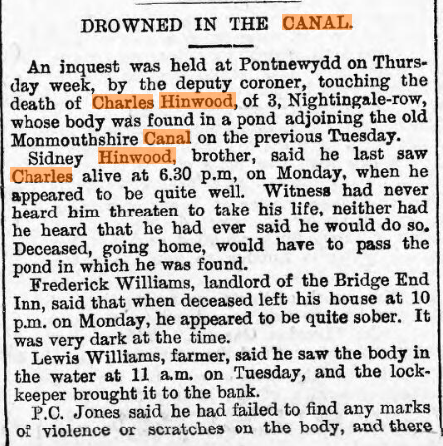 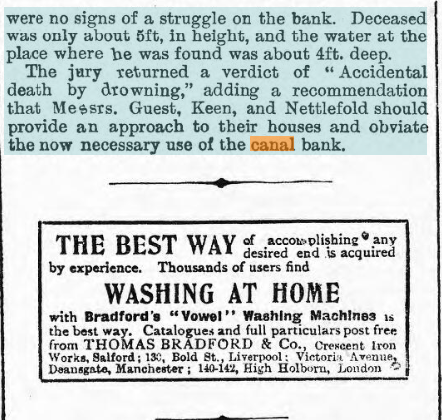 The jury recorded a verdict of 'accidental death by drowning' and recommended that Guest, Keen and Nettlefold provide a proper road to their houses. As the Evening Express (22/12/1905) made clear, the current situation meant people were forced to trespass along the canal bank which belonged to the Great Western Railway Company to get home.

Life went on for the rest of the Hinwood clan. Lydia Rose was born in 1908, followed by Lily May in 1911. The 1911 census found them still at 3 Nightingale Row along with Charles' father, Henry, as a lodger.

Sidney had still been living at 3 Nightingale Row with his mother, working as a nut sorter at the ironworks. He died in 1966 and is probably the subject of this reminiscence of Howard Warren of 7 Nightingale Row I found on the Francis Frith site:

"The Row wasn't without it's occasional talking points. I remember a fight with Number 3, a man in his seventies and his next door neighbour, a younger man in his fifties. I had a grandstand view from the upstairs window. Shouts of "get a bucket of water", not to act as seconds but to pour over the participants. Exhaustion beat the contestants before any bucket arrived, however, the dread of being doused with one of those enamel buckets would have made most people retire. My grandmother's verdict that number 3 was a nasty old man and that Sid, the other participant being so much younger would have floored him. This didn't altogether tally with my view from the upstairs window."