Mary's case is a little unusual for this series in that she didn't drown in the canal or even need to be pulled from the water. Instead she dropped down dead on the canal side after being violently assaulted by her husband... The basics of the case were reported by the Monmouthshire Beacon of May 29th 1858:

The Hereford Times of the same day carried some extra detail, along with various other publications like the Hereford Journal (02/06/1858) and the Cornish Telegraph (02/06/1858). 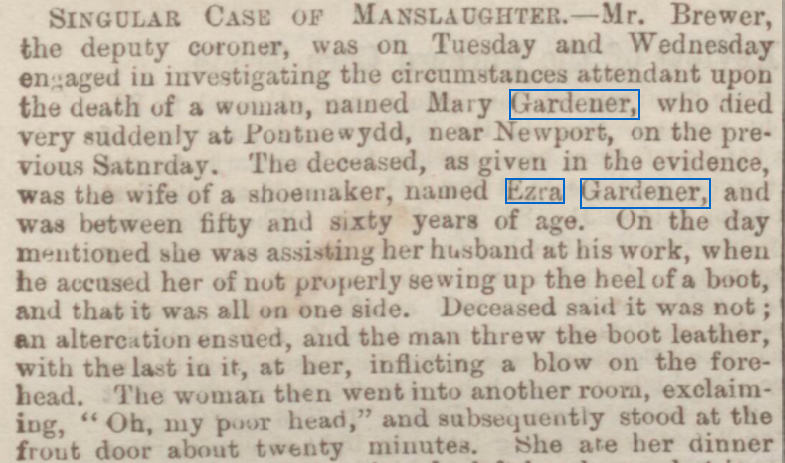 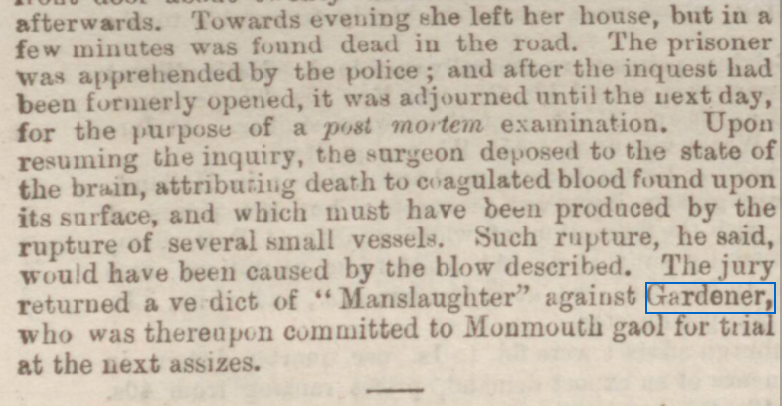 Here's the story in the Cardiff and Merthyr Guardian: 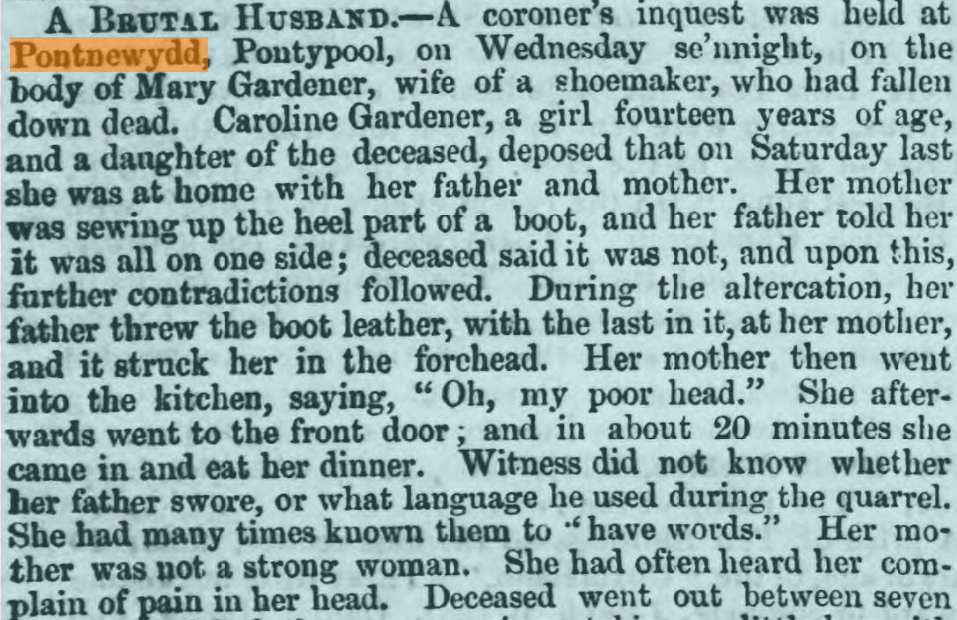 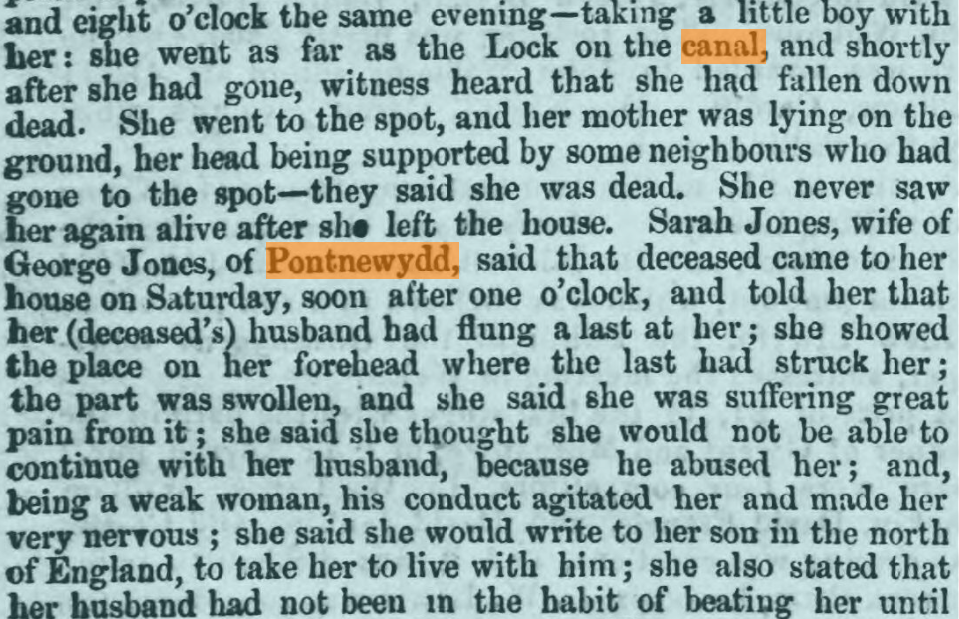 The extra detail enabled me to put together a much fuller story of Mary's life.
Mary Woodward was born in Painswick, Gloucestershire in 1806. She would later meet fellow Gloucestershire native Ezra Gardener and set up home - in 1828 they had their first child, Jane. Another daughter, Martha, followed in 1830. The family were still living in Stroud when the two girls were baptised together on June 11th 1832.

In 1853 Mary's eldest surviving daughter, Martha, married Irish labourer Jeremiah Kelly at St Mary in Risca on 8th March. Meanwhile William had moved away to start a family of his own.
By 1858 Mary was 52 and had been married to Ezra, a shoemaker, for over 30 years. Their former neighbours, Sarah and George Jones, said they had never heard the couple quarrel then but in recent months Mary had frequently complained to Sarah about 'that old villain of mine'. Ezra had begun beating her and Mary was planning to write to her son William, then living in the north of England, and ask if she could go live with him.
On the Saturday morning in question, 22nd May 1858, 14-year-old Caroline described how both her parents had been at home working. Her mother was sewing up the heel part of a boot when Ezra 'told her it was all on one side.' Mary argued that it wasn't and things quickly escalated to Ezra throwing the boot - with the last inside - at Mary's head.
Mary visited with Sarah Jones shortly after one o'clock and showed her the swollen mark on her forehead. Mary complained it was hurting badly and when her son-in-law, Jeremiah Kelly, called in that afternoon to check on his son he was told Mary was unwell and had gone to bed. By around 7:30 that evening Mary had recovered enough to walk George most of the way home, sending a passing child to go and get Martha to carry George across the lock.
Martha asked her mother to come back to her house, on account of how upset and in pain she still seemed from the earlier altercation, but Mary demurred on account of it getting late and wet, and not wanting to have to cross the lock. Martha had only been home a few minutes when a Mrs Green came to tell her that someone had just had a fit at the lock. Martha ran back to her mother's side, but Mary was already dead.
John Cousins performed a post mortem the following Tuesday and stated it was likely the blow had caused Mary's death. 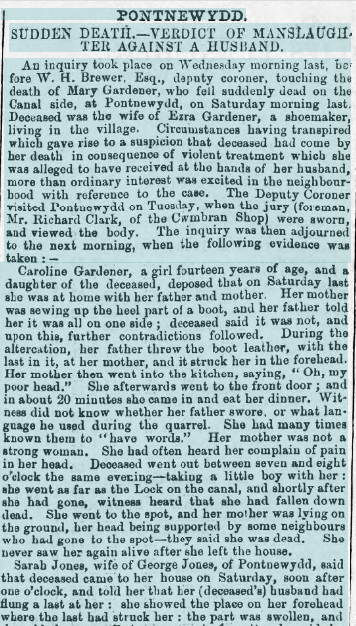 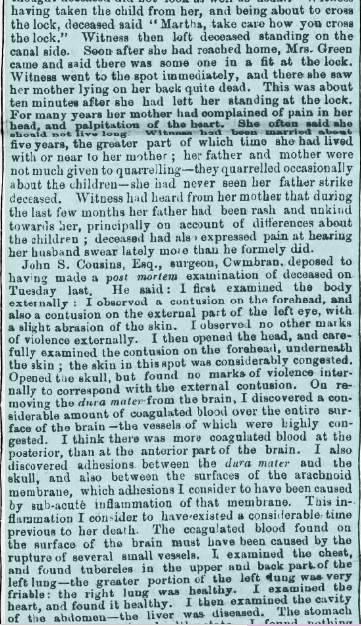 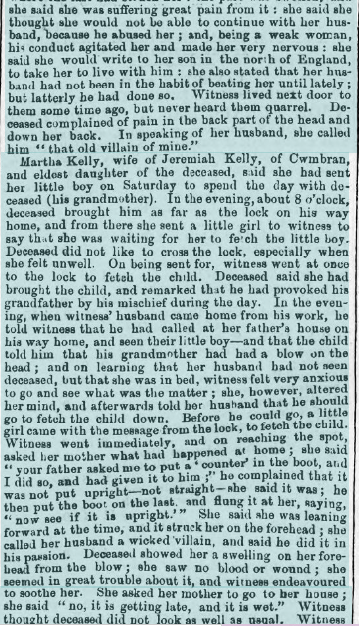 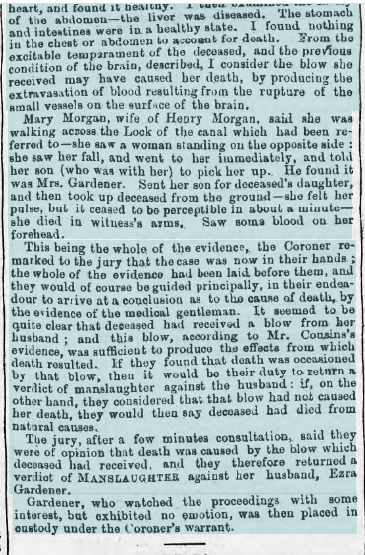 William Brewer, deputy coroner, presided over the inquest held on the morning of Wednesday 26th May. The inquest was then adjourned until the following morning, Thursday 27th May. Mary was buried later that same day.

Ezra's manslaughter case went before the assize courts on August 3rd 1858.  The Usk Observer of August 7th summed up the outcome in just a few words:

The 1861 census finds Ezra living in Aberbeeg, Pontypool, with his youngest daughter Caroline who was now 16. In 1871 Ezra was lodging with Martha and her family in Spring Vale.
By 1881 Ezra was an inmate of the Pontypool workhouse, as recorded on that year's census. Ezra was still in the workhouse when he died, aged 80, on December 12th 1885. He was buried at Trevethin church on December 14th.