I've always had a soft spot for public information films - they appeal to me as both a useful means of disseminating important information, and the ease with which they can be spoofed. Plus there's the fact that so many of them are absolutely terrifying.

Nothing says success like ensuring entire generations have nightmares...

There have been so many different iterations of the green cross code campaign, from Batman teaching London kids kerb drill in the 1940s right through to the 'staying alive' hedgehogs of my own childhood. My favourite, however, has to be 1983's Close To The Edge which uses Grandmaster Flash's The Message to teach us that Johnny was a fool who didn't act cool. He walked on out, he broke every rule. He should have checked it out, he should have used his head - if he don't watch out he's gonna wind up dead!

The mark of a good public information campaign is that those who see it absorb the information and act upon it. The 'it's 30 for a reason' ad first aired in 2006 but I still know that if you hit her at 40 mph there's an 80% chance she'll die - and I don't even drive.

1973's The Spirit of Dark and Lonely Water is a masterpiece of the genre. Not only did the children who saw it never want to go swimming in lonely water, they would have preferred to stay well away from water, full stop.

The Cold War was all but over by the time I was born and I was lucky enough to never experience the Protect and Survive campaign firsthand. That hardly diluted the powerful effect it had on me. Patrick Allen's voice still sends shivers down my spine, and Threads will forever top my scariest horror films list.

Scarfolk Council - the local authority I've always imagined to cover 'local place for local people' Royston Vasey - is the brainchild of writer and designer Richard Littler. Forever locked in the 1970s, Scarfolk uses the public information campaign to instil the fear of God into its residents... and the rest of us! 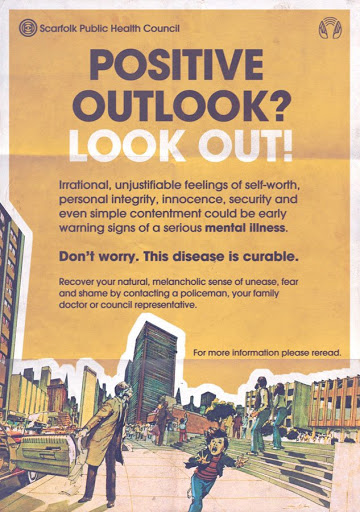 Do you have a favourite public information film / campaign? Let me know in the comments! :)