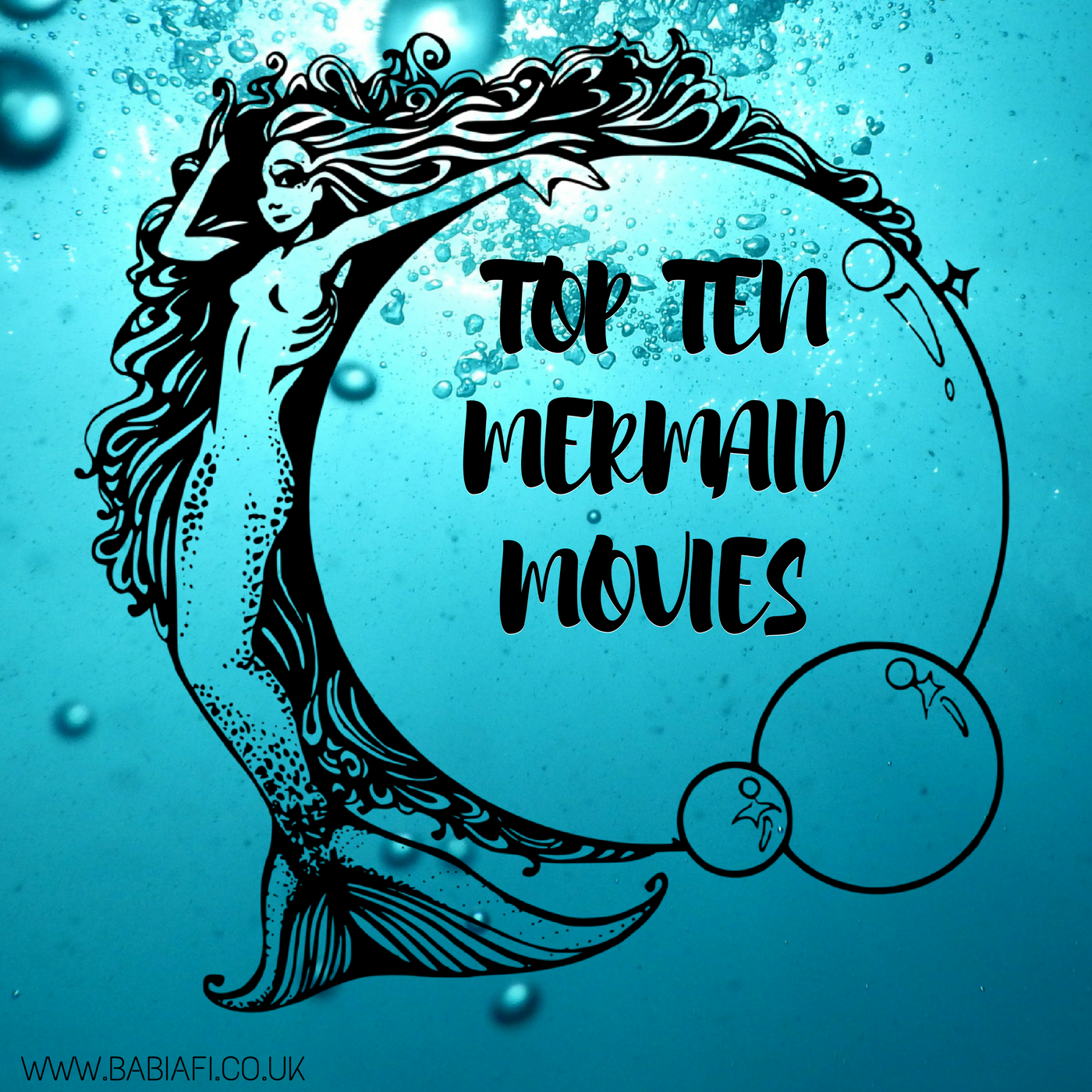 I wrote recently that we are in the middle of a full on mermaid obsession in our house. There is no escape! So continuing with the theme, here are ten Mermaid-tastic movies for the whole family to enjoy. Just, you know, not necessarily together...

Splash, 1984. As a boy Allen Bauer (Tom Hanks) was saved from drowning by a mermaid. Twenty years later he has dismissed the incident as a hallucination... until it happens all over again. Madison (Daryl Hannah) comes ashore to look for Allen; she can stay in the human world for six days before she must return to the sea. What follows are zany antics galore as Madison attempts to pass for human, culminating in a happy rom-com ending.

This was one of my favourite films as a kid, and it's still a fun, feel good watch even now. It also has a made for TV sequel from 1988 if you're left wanting more, 1988's Splash, Too, plus a 1994 Hong Kong remake - Mermaid Got Married - and, once the kids are in bed, you can check out the infamous x-rated spoof, Talk Dirty To Me Part III. 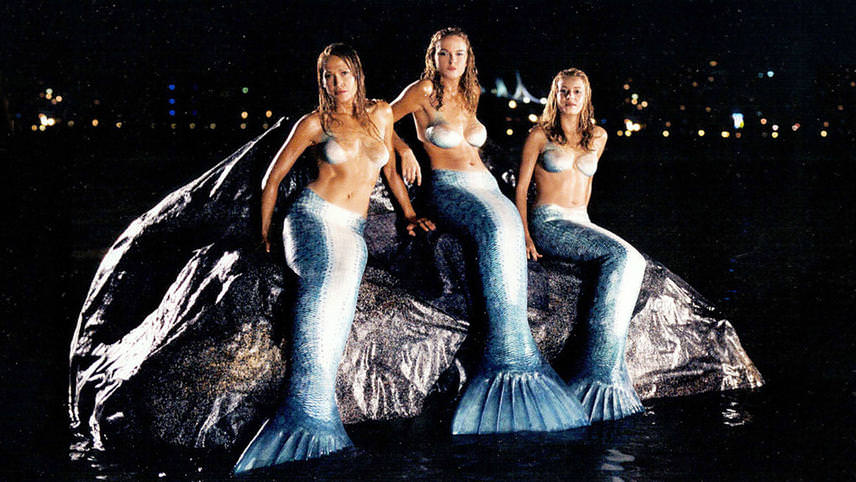 Mermaids, 2003. Three mermaid sisters come to land to avenge the death of their father, who was murdered by unscrupulous fishermen harvesting from the coral reef - but come to learn that not all humans are bad. It's fairly standard made for TV fare, but I enjoyed it all the same. 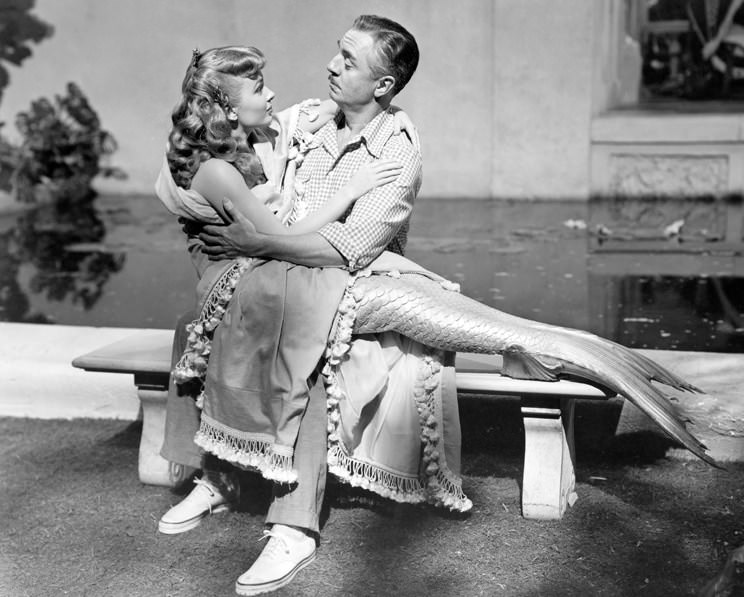 Mr. Peabody and the Mermaid, 1948. In this comedy of errors Mr. Peabody (William Powell) and his wife are vacationing in the Caribbean when he decides to get some fishing in. After reeling in a real life mermaid (Ann Blyth), Arthur has to hide her from both the resort authorities and his wife - who suspects him of playing away. When Mrs. Peabody has enough and goes home early, Arthur suddenly finds himself accused of her murder...

Best of all, you can watch this one free over on YouTube. Enjoy! 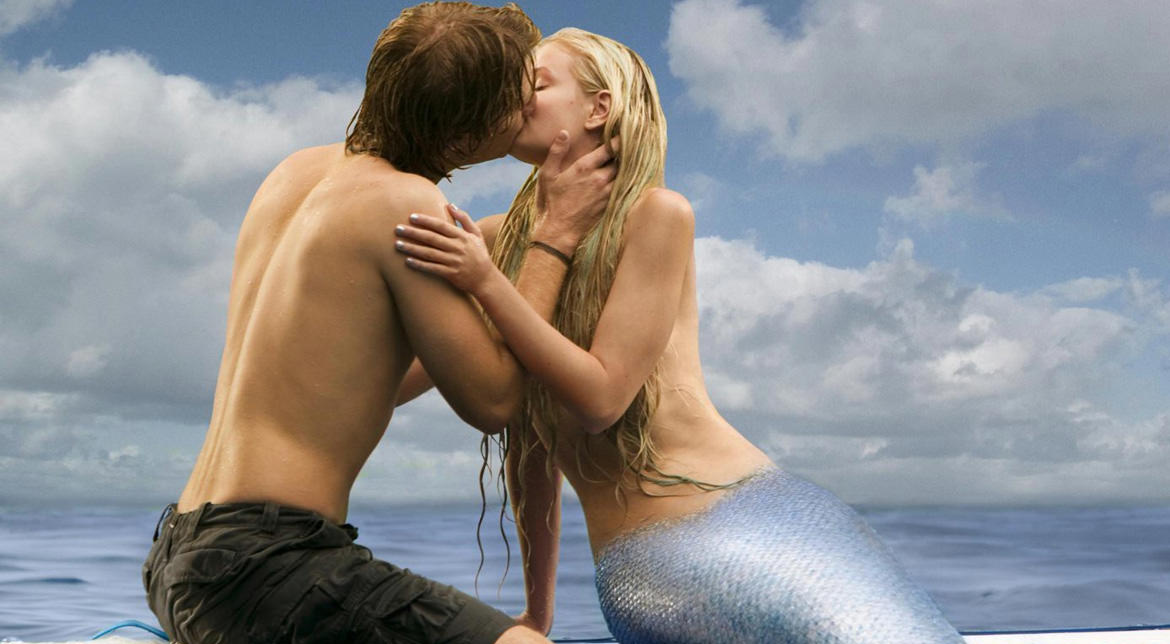 Aquamarine, 2006. Lighthearted fun aimed squarely at the pre-teen market, Aquamarine stars Sara Paxton as a mermaid who enlists the help of two teenage girls (Emma Roberts and one time popstar, JoJo) to help her prove to her dad - who wants to marry her off to a stranger - that true love exists, in exchange for granting them a wish. 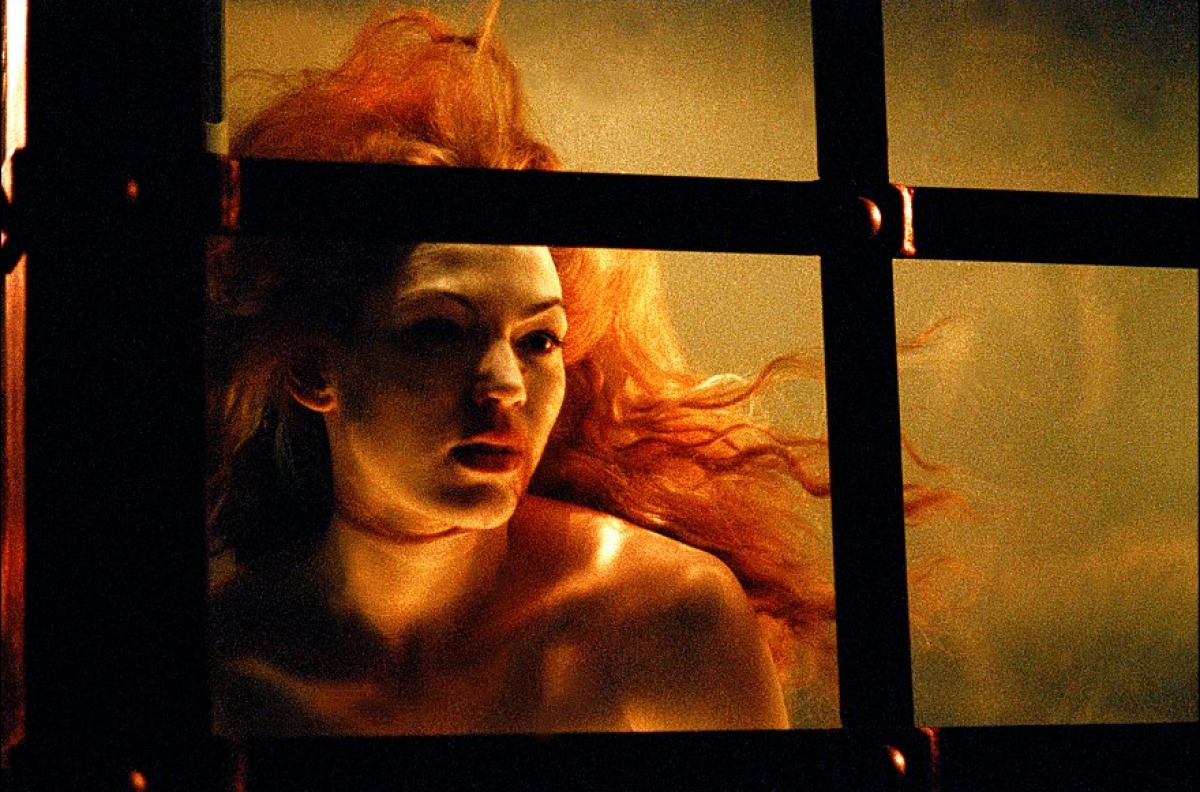 She Creature, 2001. Sometimes mermaids aren't very nice, er, people. In She Creature Rya Kihlstedt plays a mermaid who just wants her freedom. Angus Shaw (Rufus Sewell) is intent on exhibiting her as a carnival attraction, so the mermaid forms a bond with Shaw's wife Lily (Carla Gugino), impregnating her and sparing her life. As for Shaw and the rest of the crew? Well, they become fish food!

For more mermaid horror, check out 1956's The She-Creature and 2015's The Lure which features more hungry merpeople. Then there's Dagon (2001) with its murderous fish people, and Night Tide (1961) featuring Linda Lawson as a woman who believes herself to be a murderous mermaid...

The Little Mermaid, 1989. Credited with reviving Disney's animation studios, The Little Mermaid adapted Hans Christian Anderson's tale for audiences who didn't want to leave the cinema depressed. Ariel, a sixteen-year-old mermaid princess, falls in love with a Prince who she saved from a shipwreck. In order to see him again she trades her voice to Ursula, the sea witch, in exchange for legs to walk on land.

If you're a glutton for punishment, you can check out the direct-to-video prequel - Ariel's Beginning - and sequel, The Little Mermaid II: Return to the Sea. Alternatively, track down some of the other films based on the story. 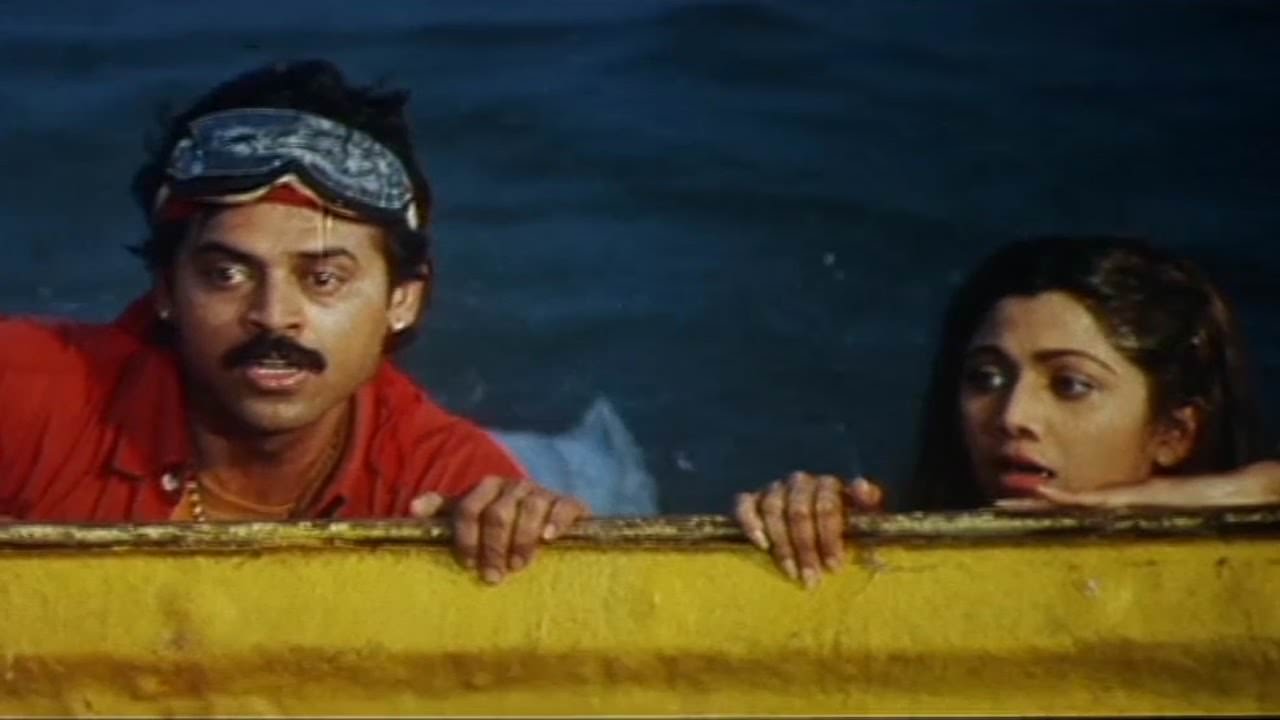 Sahasa Veerudu Sagara Kanya, 1996. (Adventurous Hero and a Mermaid) Total cheese from start to finish, this Tollywood film stars Shilpa Shetty as a mermaid who comes to land and falls for fisherman Ravi (Venkatesh). But when the film's bad guys know there's a shipwreck full of riches for the taking that can only be located by a mermaid, it's never going to be a straightforward love story...

Most of the early mermaid movies are now lost - 1910's The Mermaid,with a hotelier's daughter duping the press, for instance, and Annette Kellermann wearing the first swimmable mermaid tail on celluloid in the 1911 film of the same name. Kellermann's other mermaid films - like 1918's Queen of the Sea - suffered the same fate. That leaves us with the Russian 1910 one reeler Rusalka, about a man and a water nymph, to show us the beginnings of the cinematic mermaid. 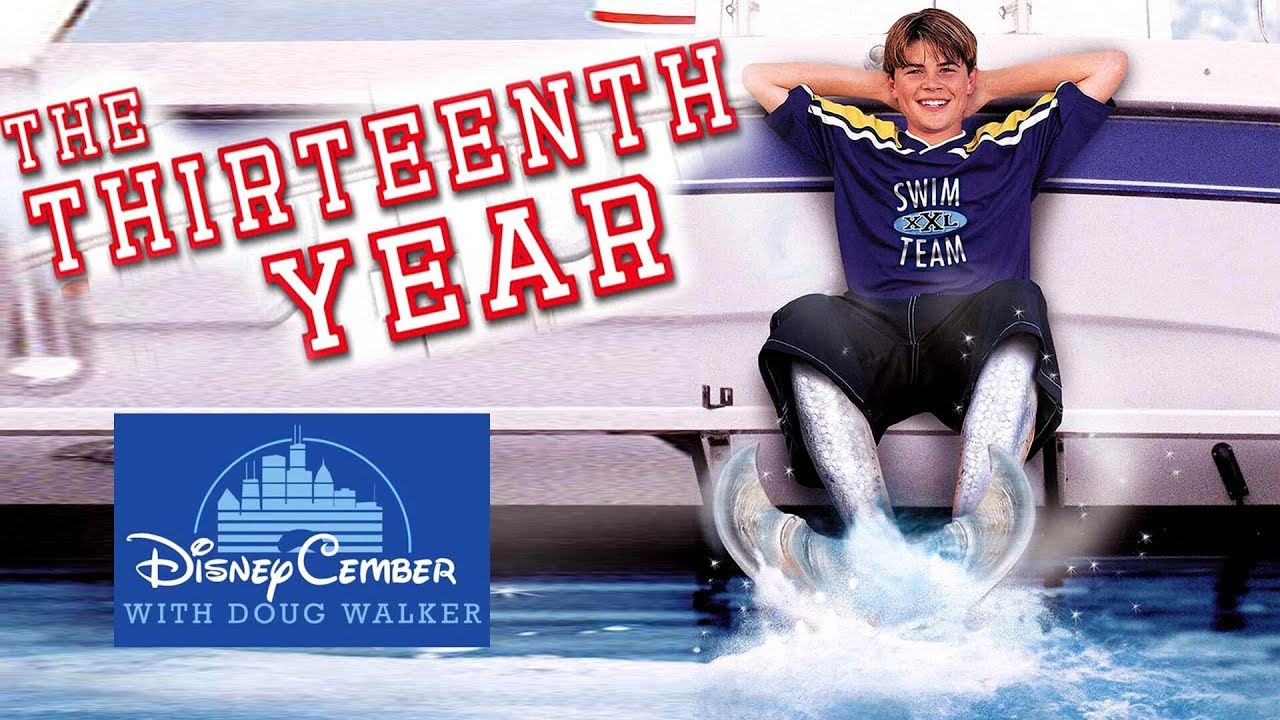 The Thirteenth Year, 1999. Mermen seem to be in short supply in mermaid films, and rarely get to be a main character. The Thirteenth Year attempts to redress that imbalance, starring Chez Starbuck as Cody Griffin, an adopted teenager who begins to learn that perhaps there is a reason behind his love of swimming. It turns out that he's half merperson, and reconnects with his mermaid mother who helps him deal with his transformation into a merman - in between all the typical teen problems with bullies, girls, and a crazy dad who wants to capture his mother in the interests of science...

If you're looking for more mermen, it's slim pickings I'm afraid. 2017's The Shape of Water has an 'amphibian man', while Sabrina the Teenage Witch had a brief fling with a merman in the 1999 TV film Sabrina Down Under. 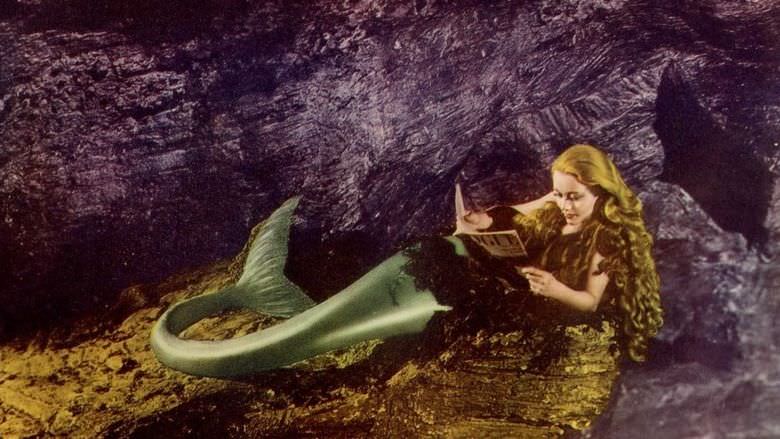 Miranda, 1948. This is a really fun British comedy starring Glynis Johns as a mermaid who is reeled in by Dr. Paul Martin (Griffith Jones) during a Cornish fishing trip. She turns the tables on him, dragging him down to her underwater cave until he agrees to show her the bright lights of London. Cue laughs aplenty as Martin finds her a wheelchair and brings her home for the duration.

(For more film trivia, I have a full scan up of the May 29th 1948 issue of Picture Show which made it their film of the week.)

Glynis Johns reprised the role for 1954's Mad About Men, which saw her switching lives with a gymnastics teacher for a few weeks!


Finally, I have to give an honorary mention to Mermaids (1990) which is one of my all time favourite films. What it lacks in actual mermaids it makes up for in Cher and timeless coming of age story telling. 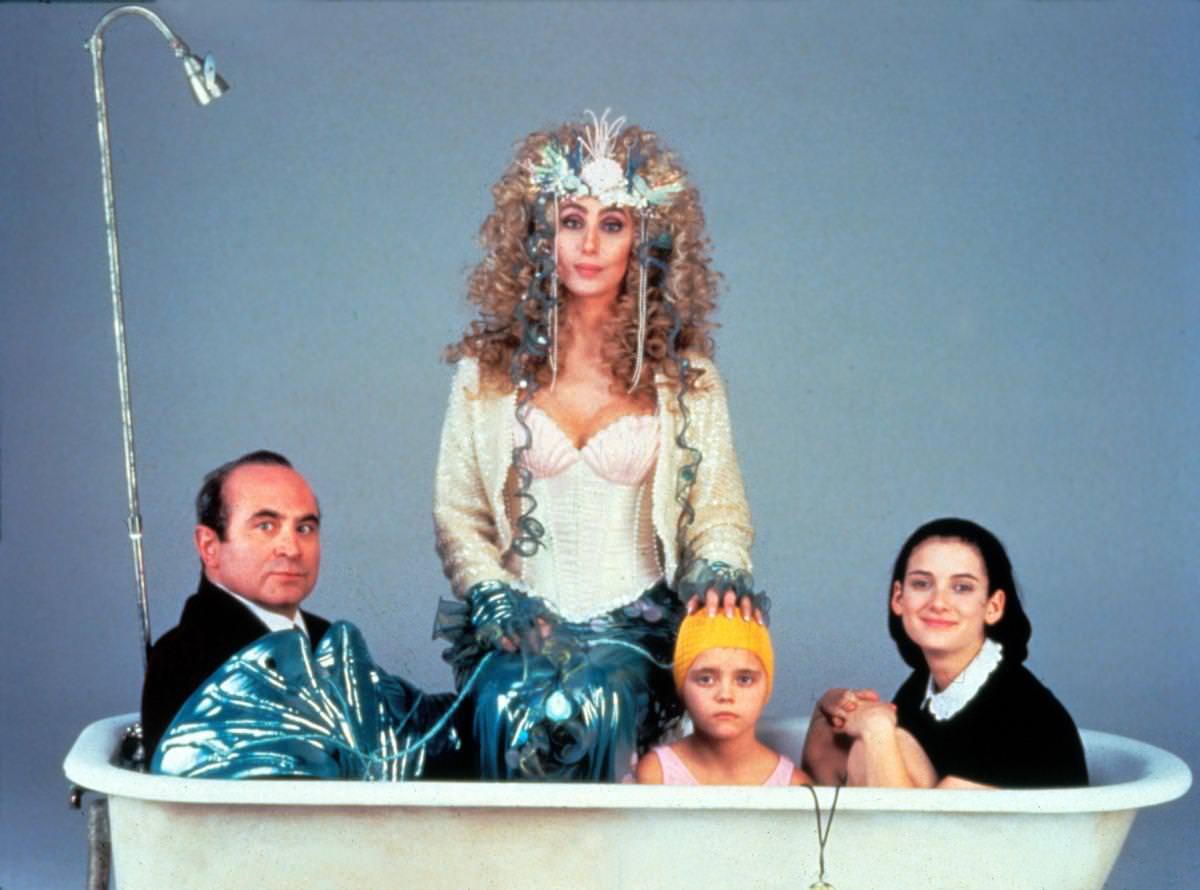